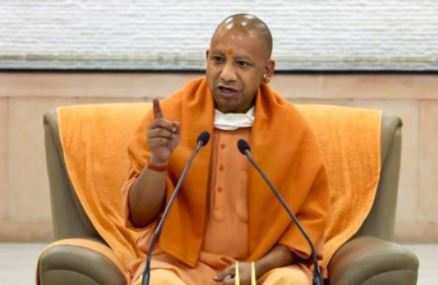 Lucknow: Uttar Pradesh Chief Minister Yogi Adityanath on Sunday emphasised on prevention as he launched the communicable disease control drive and Dastak Abhiyan in Varanasi. He said under the leadership of Prime Minister Narendra Modi, coronavirus cases significantly dropped to the minimum level in the state.

Addressing the event at the Cholapur community health centre, Adityanath said control of Japanese encephalitis in eastern Uttar Pradesh was the prime example of how effective preventive measures combined with efficient health strategy could do wonders.

The preparations made at this point of time would help tide over the communicable diseases, which normally erupt during the summers and rainy season, he added.

“There has been 75 per cent drop in the JE cases and 95 per cent fall in the number of JE deaths since 2017 when my government took up the task to eradicate the menace,” Adityanath said.

“Over the last 40-45 years, the previous governments kept ignoring the need to pay heed to JE, which was prevalent not only in the eastern Uttar Pradesh but 38 districts were also hit by it, claiming thousand of lives,” he said.

“Along with the coronavirus in the country and the state, we are trying to beat all the diseases that often cause thousands of deaths,” the chief minister said.

To control the one such disease of JE, an inter-departmental coordination was established and a special campaign was launched with the Health Department as the nodal department, he said.

“Recently, a special campaign for the vaccination of JE was started in Lucknow even as we are in final stage of getting rid of this disease,” Adityanath said.

The chief minister said the Swachh Bharat mission helped a lot in controlling the health hazards simply because cleanliness and health were related issues.

“We constructed toilets and created awareness towards cleanliness, which in turn helped raise our health profile,” he said.

The communicable disease control drive will run from March 1-31, the state government said in a statement.