India would aim to take the toss out of equation and put up a much improved all-round show against a formidable England in their to bid to level the series in the fourth Twenty20, here on Wednesday.

The template of win the toss and bowl has been set in the series with the chasing team getting home rather comfortably.

However, India skipper Virat Kohli has repeatedly stressed on the need to do well whether they are posting totals or chasing as part of their preparation for the T20 World Cup at home later this year.

In the two games they lost after batting first, India struggled in the powerplay, which impacted their final total despite one batsman (Shreyas Iyer and Virat Kohli respectively) going on to make a significant contribution.

A lot of it was down to K L Rahul not being amongst the runs but Kohli made it amply clear that the Karnataka batsman and Rohit Sharma remain their preferred opening combination. 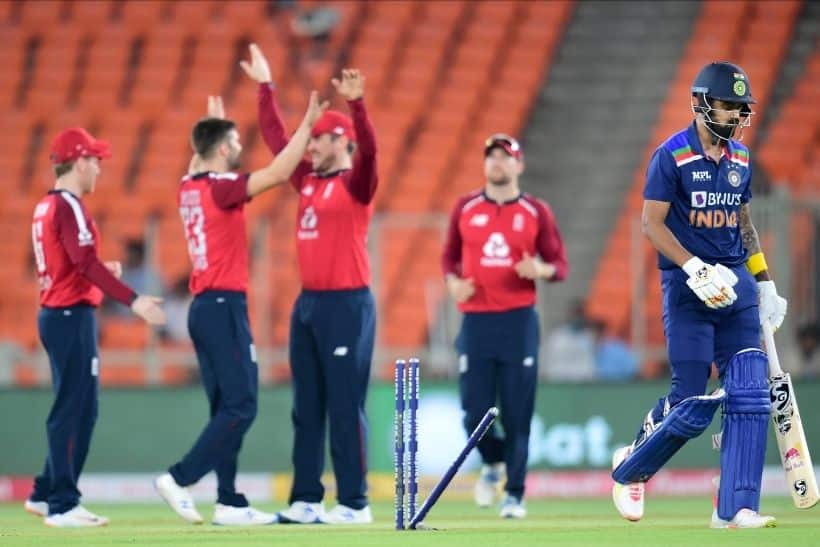 KL Rahul has not being amongst the runs. (BCCI)

“If you look at his stats in the last 2-3 years, they are probably better than anyone in T20. He will continue to be one of our main batters along with Rohit at the top of the order. We don’t have any concerns there,” said Kohli.

The express pace of Mark Wood and Jofra Archer has also made life tough for the Indians in the first six overs. They have been able to extract disconcerting bounce from the surface, putting the batsmen in two minds.

Going by Kohli’s words post the third game, a third all-rounder alongside Hardik Pandya and Washington Sundar can be drafted into the side with the choice between uncapped Rahul Tewatia and Axar Patel.

Unlike the first game, Kohli’s sublime 77 ensure India did have some runs to defend but the bowlers hardly troubled the opposition batsman with Jos Buttler running away with the contest. Virat Kohli cuts a lonely figure on way to his unbeaten 77* vs England in the 3rd T20I. (AP Photo)

The team’s number one spinner Yuzvendra Chahal has leaked runs both times India have set a target.

Hardik Pandya’s return as a bowling all-rounder has been promising but he is yet to take a wicket. Bhuvneshwar Kumar has kept things tidy in his comeback series but the team expects him to provide regular breakthroughs with the new ball.

Offie Washington Sundar has been the stand out bowler for India with four wickets at an impressive economy rate of 6.95.

Despite India being 1-2 down, no major changes are expected in the playing eleven.

England, like India, also want to win in all conditions and will be buoyed by their emphatic win in the previous game.

Buttler being amongst the runs is also a cause of worry for India as on his day he can demolish any attack in the world.

Jonny Bairstow, who had a horror run in the two Tests he played against India, came up with a morale boosting 40 on Tuesday.

Now England are waiting for the world’s number one batsman Dawid Malan to fire.

It will take a special effort from India to stop the number one ranked team from winning the series on Wednesday night. The hosts winning the toss should make their task less tough.

‘Pulling was his B game’: Dale Steyn on playing mind games with Virat Kohli

Senate Democrats add to voices calling on ICE to not re-detain people freed due...

Politics dsj1031 - June 18, 2021 0
House members noted in their letter that while some ICE offices have claimed they won’t again detain someone they released due to the virus,...

Senate Democrats add to voices calling on ICE to not re-detain...