It has been one year since the World Health Organization (WHO) declared COVID-19 a pandemic. The virus, which is microscopic in size, has, in one way or another, changed the lives of all 7.8 billion people on Earth.

While the long-term impact of this global health crisis may take years to understand, its immediate effect has already changed the world as we know it. In the following series of infographics, we break down the latest available figures and reports to help you understand the global repercussions of the coronavirus pandemic.

For each of the topics, we have linked to the most complete and reliable datasets available on a global level. These are often presented as the average across the country. It is important to remember that averages may mask inequalities, especially when dealing with underreported areas or populations at risk.

At least 2.7 million people around the world have died from COVID-19. While the leading global causes of death for 2020 have still not been published, compared to 2019, the coronavirus ranks among the top five biggest killers.

In 2019, 55.4 million people died across the globe. Heart disease killed the most number of people at 8.9 million followed by strokes (6.2 million) and lung disease (3.2 million). Collectively these are known as non-communicable diseases which means that they are not transmitted between people. In contrast, the coronavirus is highly contagious and so is classified as a communicable disease. 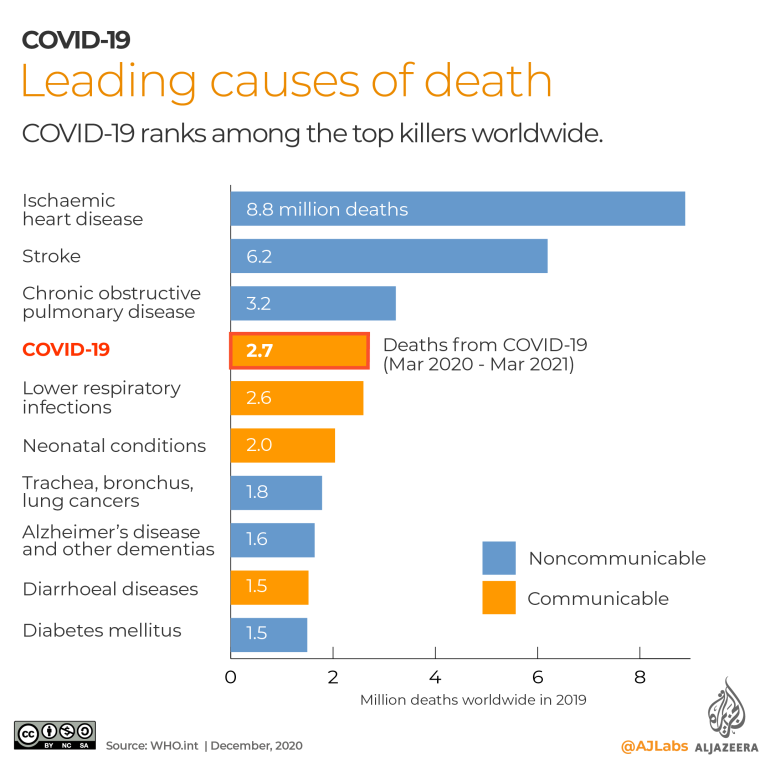 The graphic below shows how one year of coronavirus deaths compares to the leading causes of death in 2019.

In the United States, the country with the highest number of COVID-19 deaths, data from the Centers for Disease Control and Prevention shows that the coronavirus has killed more Americans in one year (540,000) than the flu has in the last 10 years combined (368,000), for which data is available.

The World Health Organization estimates that close to one billion people worldwide are living with a mental disorder. In 2019, 703,000 people died due to suicide, making it the 17th most common cause of death around the world. Despite that, countries are spending on average two percent of their national health budgets on mental health.

The United Nations has warned that the COVID-19 pandemic is likely to cause a long-term upsurge in the number and severity of mental health problems. The evidence regarding the mental health consequences of lockdowns and social distancing is still being studied. While no large-scale data is available on the effect COVID-19 has had on mental health globally, several smaller studies have indicated higher rates of anxiety and depression.

Below are five tips by Dr Devora Kestel, director of the Department of Mental Health and Substance Abuse at the World Health Organization, on how we can protect our mental health.

By definition, a pandemic is a worldwide spread of a new disease. In one way or another, COVID-19 has affected the lives of all 7.8 billion people on Earth. It is estimated that more than two-thirds of the world population has experienced lockdown measures, lasting from weeks to months.

According to data compiled by the Oxford COVID-19 Government Response Tracker, more than 100 countries and territories in 2021 have reintroduced stay-at-home orders that require residents to not leave home, with some exceptions such as for essential trips, daily exercise or grocery shopping.

According to estimates by the World Bank, the global economy shrank by 4.3 percent in 2020, wiping out trillions of dollars. Countries already facing economic hardship sank further into debt. A report by Oxfam International estimates that it could take more than a decade for the world’s poorest people to recover from the economic fallout of the COVID-19 pandemic.

On the upside, the World Bank expects the global economy to expand by 4 percent in 2021 with vaccine rollouts and investments leading the recovery.

The coronavirus has disproportionately affected the poor. For the first time in 20 years, global poverty is likely to increase significantly. The World Bank estimates that the coronavirus has pushed between 119 and 124 million more people into extreme poverty. That takes the total number of people who live on less than $1.90 per day to 730 million, which is about 10 percent of the world’s population.

In 2020, 114 million people lost their jobs, according to the latest unemployment figures from the International Labour Organization (ILO). But looking at official unemployment figures alone is not enough to measure joblessness. As the ILO points out, many more workers have fallen into “economic inactivity”.  This means they found themselves having to withdraw from the labour force. Many more may still be employed but operating with reduced working hours or pay cuts.

Women and younger workers have been among the hardest hit, prompting concerns over widening gender inequality and a lost generation of workers.

In addition, the United Nations Development Programme has warned that nearly half of all jobs in Africa could be wiped out due to the pandemic.

The rich got richer

A report released by Oxfam International, a United Kingdom-based charity, said the pandemic has hurt people living in poverty far harder than the rich. The most severely affected are women, Black people, African-descendants, Indigenous peoples, and historically marginalised and oppressed communities around the world, the report said.

To put that income inequality in perspective, a report by Swiss Bank UBS, found that the world’s richest people saw their wealth increase by $3.9 trillion between March and December 2020. The 10 richest billionaires increased their wealth by $540bn during this time.

Many of the world’s richest men, including Elon Musk (US), Zhong Shanshan (China) and Mukesh Ambani (India), saw their wealth more than double since the pandemic was declared.

1.7 billion students out of school

In 2020, school and university closures heavily disrupted the education of more than 1.7 billion students from 188 countries around the world. That’s about 99 percent of the world’s student population according to UNESCO.

Today, nearly 900 million students, more than half of the world’s student population, continue to face heavy disruptions to their education, ranging from full school closures in 29 countries to reduced or part-time classes in another 68 countries, according to the latest data from UNESCO.

While online schooling has played an important role in allowing classes to continue virtually, the UN estimates that nearly 500 million children, especially in poorer countries or rural areas, have been excluded from remote learning due to a lack of learning technology or policies.

Oxfam estimates that the pandemic will reverse the gains of the last 20 years of global progress made on girls’ education, further increasing poverty and inequality.

In 2019 more than 4.5 billion passengers travelled on 38 million flights worldwide. With lockdowns and quarantines in full strength for most of 2020, many chose to cancel or postpone their travel plans.

While some planes continued to take off, international passenger demand in 2020 dropped by 75.6 percent compared to 2019, according to the International Air Transport Association.

Before and after satellite images taken in March 2020, show the effect the coronavirus had on cities worldwide. Unprecedented lockdowns emptied streets, disrupted travel and slowed economic activity – all while temporarily slashing air pollution.

The images below show how Mecca, Wuhan and Venice all saw a sharp decline in visitors a few weeks into the pandemic. View satellite images from more cities here.

In the first weeks following COVID-19 lockdowns, there were several reports and stories of how much clearer and less polluted the skies were. For example, residents of Venice, Italy, reported seeing clear running water through its normally bustling canals for the first time in years.

However, this reduction seems to have been short lived. A report recently published by the International Energy Agency found that while global energy-related CO2 emissions fell overall by 5.8 percent in 2020 – the largest annual percentage decline since World War II – the latest data shows that global CO2 pollution has bounced back to pre-COVID levels.

To understand what that means, it is useful to read what professor Ralph Keeling, head of the Scripps CO2 programme, said back in May 2020:

“People might be surprised to hear that the response to the coronavirus outbreak has not done more to influence CO2 levels. The build-up of CO2 is a bit like trash in a landfill. As we keep emitting, it keeps piling up.”

US and NATO: Manufacturing a new cold war? | NATO

Crypto dsj1031 - June 13, 2021 0
As restrictions seem to be easing for many, people who are looking to leave their houses and discover their region or country can...

Moroccan landlords refuse to rent out space for Israeli mission |...