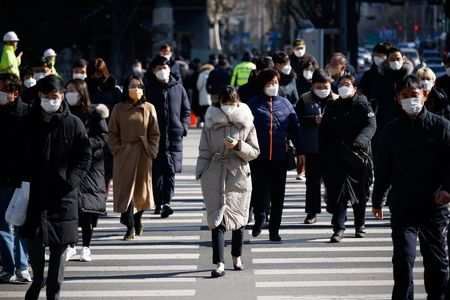 Seoul: South Korea is reviewing whether to approve rapid coronavirus tests that can be taken at home and produce near-immediate results as another tool to fight the pandemic. Kwon Jun-wook, director of South Korea’s National Health Institute, said Thursday there’s a need to provide convenient and accessible tests that people can use regularly because the virus is often transmitted by people with no or mild symptoms.

Health authorities had previously been reluctant to expand the use of rapid antigen tests and other forms of fast testing, which could produce results within 30 minutes but are less accurate than standard laboratory tests.

However, Kwon said the country may need more tools as it has struggles to slow the spread of the virus following a devastating winter surge, with around 300 to 500 new cases still being reported every day.

He said that real-time PCR tests, which involve health professionals administrating nasal and throat swabs and lab machines genetically analyzing the samples, would remain the country’s gold standard even if officials approve rapid tests for public use.

South Korean officials also said Thursday that the country will issue a smartphone app this month that verifies a person has been vaccinated. While Prime Minister Chung Se-kyun raised the possibility that the app could be used as a vaccine passport, Korea Disease Control and Prevention Agency officials said countries would first have to agree on an international standard for screening travellers for vaccination.

Health dsj1031 - April 10, 2021 0
New York: Researchers have discovered a surprising response in lung cells infected with the SARS-CoV-2 virus, which might explain why the disease is...