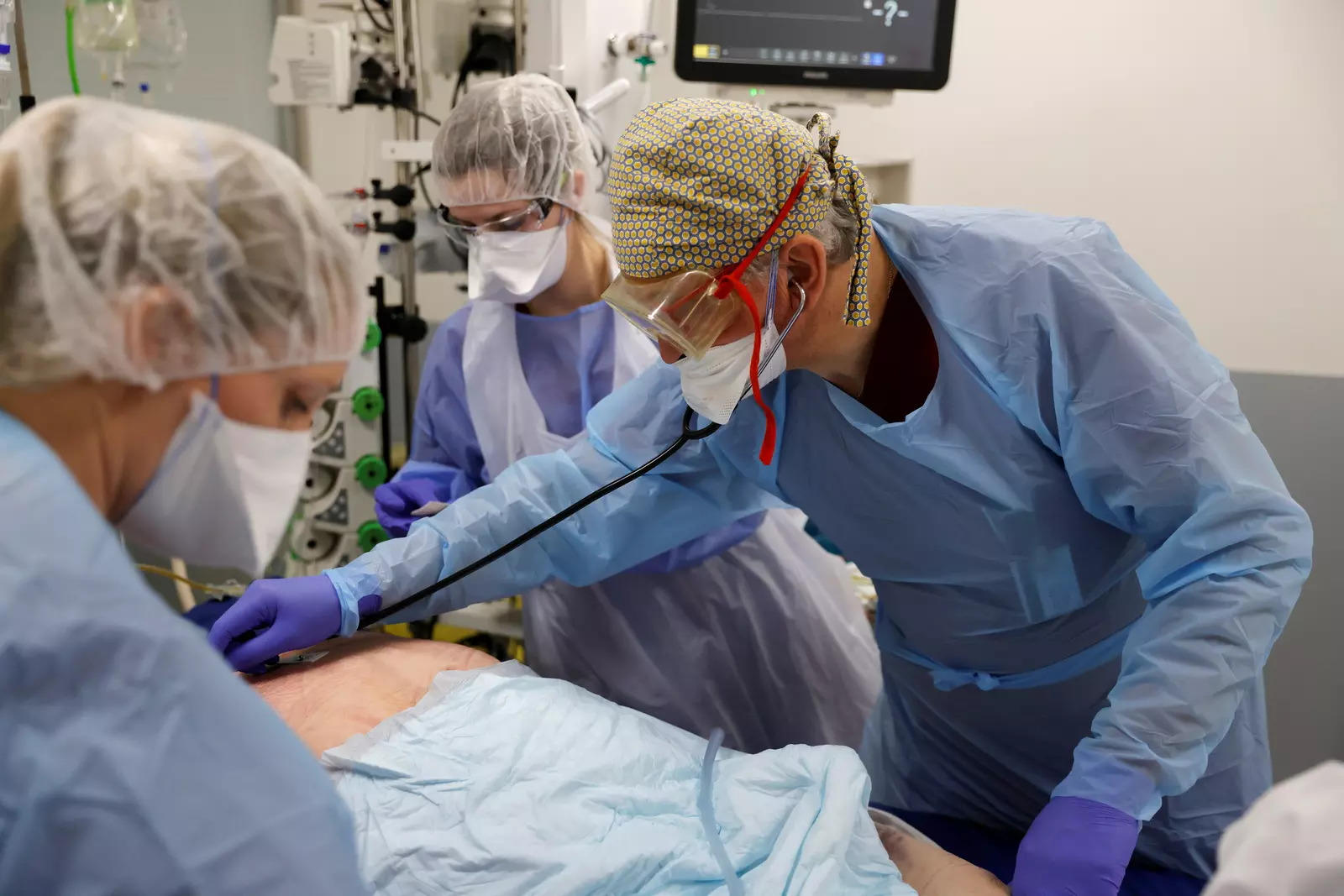 Ahmedabad: In 24 hours ending 9.30 am on Friday, private hospitals in Ahmedabad city added 229 patients which means 19 patients got hospitalized every two hours. The cases on Friday morning (2,319) were not only the highest since early December, but also rose 77% in just 7 days from 1,310 on March 26. In Surat, Vadodara and Rajkot too, admissions due to Covd-19 in hospitals have doubled in the past week.

As Gujarat added a record 2,640 cases on Friday, the fast spreading viral infection has pushed the private hospitals to add more beds to tackle the rise in demand. In Ahmedabad in seven days, the number of beds available rose from 2,886 to 3,304, a spike of 14.5%. Dr Bharat Gadhvi, president of Ahmedabad Hospitals and Nursing Homes Association (AHNA), said that at its peak in November-December, the city had 3,500-odd beds for Covid-19 patients. The third wave is yet to peak.

“Due to dip in the cases in January-February, many hospitals discontinued Covid-19 treatment or reduced the infrastructure to accommodate other patients. But with the surge, many hospitals are again ramping up facilities to meet the rush,” he said, adding that in all about 70% beds are occupied.

According to AHNA website, 40-odd hospitals out of 90 in the city had over 90% occupancy and nearly full isolation wards. “The share of ICU and ventilatory beds has increased from 21% a week ago to 24%,” said Dr Gadhvi.

The hospitals are also rushing to meet the demand. “Right now, we have 48 beds for Covid-19 patients. All of them are occupied. Thus, we have given an application to add 22 more beds, taking the number to 70,” said Dr Sunil Popat, medical director of Navrangpura-based Nidhi Hospital.

Likewise, Dr Viral Shah, medical director of Pushya Hospital, said that his hospital had discontinued the Covid-19 treatment when the cases dipped. “We have again resumed admission of Covid-19 patients after a gap of nearly two months,” he said.

Dr JP Modi, medical superintendent of Civil Hospital, Ahmedabad, said that a week ago about 300 patients were in the hospital, which has doubled at 596 as of Friday evening. “We are admitting about 100-odd patients daily,” he said, adding that out of 1200-bed capacity, the hospital currently has 920 functional beds. “More will be added as required. About 170 beds are also prepared at IKDRC.”

Dashboard to give information on beds

In other cities, the scenario is the same. In Vadodara city and district, the number nearly doubled at 5,651 on Friday from 3,468 on March 23. Sources said that prominent private hospitals have hardly any beds vacant even as the district has 8,347 beds. The authorities have started a dashboard to give information on bed availability.

In Surat, the number of patients under treatment got nearly doubled from 688 on March 26 to 1,172 on Friday. “In New Civil hospital, out of the total 2225 beds, 291 are occupied and in SMC run SMIMER hospital, out of 650 beds, 362 beds are occupied,” said a senior Surat Municipal Corporation (SMC) official.

Rajkot district officials said that the number of Covid-19 patients increased from 549 a week ago to 950, again recording nearly double the growth. Rajkot city has 1,767 beds for the Covid-19 patients on Friday, a slight rise from 1,509 on March 26.

World dsj1031 - April 10, 2021 0
Tehran, Iran – Authorities in Iran have been forced to impose fresh nationwide restrictions after lack of control over travels during the Persian...

Health dsj1031 - April 10, 2021 0
African countries have received over 33.8 million Covid-19 vaccine doses from the Covax facility and through bilateral agreements outside Covax, the Africa Centers...

Crypto dsj1031 - April 10, 2021 0
This is part one of a multipart series on blockchain and crypto in China.China has been discussing the possibilities of national digital currency...