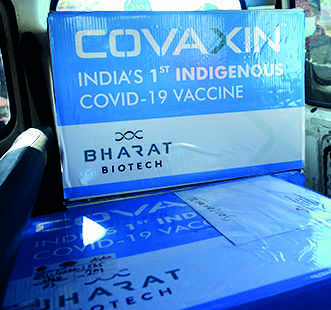 Jaipur, Apr 14 : Amid a surge in the coronavirus infection, over 300 doses of anti-Covid vaccine have been stolen from a hospital in Jaipur, prompting authorities to lodge a criminal case against the theft. A total of 320 doses of Bharat Biotech’s Covaxin went missing from the Kanwatiya government hospital in Shastri Nagar, an official said on Wednesday.

The hospital authorities informed the Jaipur chief medical and health officer about the theft on Tuesday night following which an FIR was lodged on Wednesday.

“I was informed last night that the doses have been stolen. It is surprising. A police case has been registered in this regard,” Dr Narottam Sharma, Jaipur CMHO, told .

The vaccines were stolen apparently on Monday, he said, adding the case was registered by the hospital superintendent, Dr L Harshvardhan, on Wednesday.

Sharma said a departmental probe too has been ordered into the theft.

“An FIR was registered about the theft of 32 vials of corona vaccine from storage. One vial has 10 doses,” Shastri Nagar police station’s SHO Dilip Singh said.

He said the case was registered against unidentified persons under IPC sections and the matter is being investigated.

The Opposition BJP, meanwhile, targeted the state government over the issue.

Party state president Satish Poonia said it is big negligence on the part of the state government.

The anti-Covid vaccines getting stolen exposes the health arrangements of the state government, he added. AG SDA RAX RAX

Sport dsj1031 - September 24, 2021 0
He might have played just one match under Rishabh Pant’s leadership as of now but South African speedster Anrich Nortje is impressed by...

Politics dsj1031 - September 24, 2021 0
xWhoa - This is pretty bold and quite possibly the best move CDC Director Walensky has made in a long time. ACIP clearly...