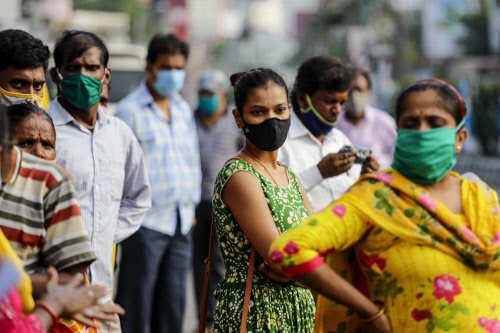 Bhubaneswar: Odisha‘s Covid-19 tally mounted to 3,55,353 as the state registered this year’s highest single-day spike of 2,267 new cases on Wednesday, a health department official said. The daily count crossed the 2000-mark for the first time in 2021, he said.

The death toll rose to 1,933 as three more people from Bolangir, Ganjam and Jajpur districts succumbed to the disease.

Taking to Twitter, the Health and Family Welfare Department said, “Regret to inform the demise of three Covid positive patients while under treatment in hospitals.”

Of the fresh cases, 1,314 were reported from quarantine centres and 953 detected during contact tracing.

Sundargarh district registered the highest number of new cases at 458, followed by Khurda (348), Sambalpur and Bargarh (120 each), Cuttack (117), Nuapada and Nabarangpur (104 each).

The government has started imposing night curfew from 10 pm to 5 am in 10 districts bordering Chhattisgarh and Andhra Pradesh where the number of coronavirus infections is rising sharply, the official said.

The chief secretary reviewed the preparedness of the Bargarh, Sambalpur and Jharsuguda administrations to contain the spread of the disease, the official said.

The Nuapada district administration has declared the Sinapali Gram Panchayat as a micro containment zone for four days starting from Wednesday after several Covid cases were reported from the area, he added.

South Delhi civic body looks to strengthen infra at 3 of its hospitals to...

Health dsj1031 - September 18, 2021 0
The Central government has started preparing for another historic landmark by administering 100 crore vaccine doses before mid-October and is expected to reach...

South Delhi civic body looks to strengthen infra at 3 of...