A banner hung on the railings outside Anfield bearing a pointed message to Liverpool’s American ownership: “Shame on you. RIP LFC 1892-2021.”

Liverpool’s players arrived for an English Premier League match at Leeds United’s Elland Road a few hours later, to the backdrop of jeers and abusive chants by fans gathered outside the stadium.

Even Leeds’ players had a message for Liverpool on the field. They warmed up with the words “Earn it” on the front of their T-shirts and “Football is for the fans” on the back.

Anger and rising discontent swept through the European game on Monday following the announcement that Liverpool and 11 more of the world’s biggest soccer clubs formed a breakaway group to establish a controversial Super League, a closed competition that would effectively replace the Champions League.

Some of the fiercest reaction to the proposals came from fans of the breakaway clubs themselves. 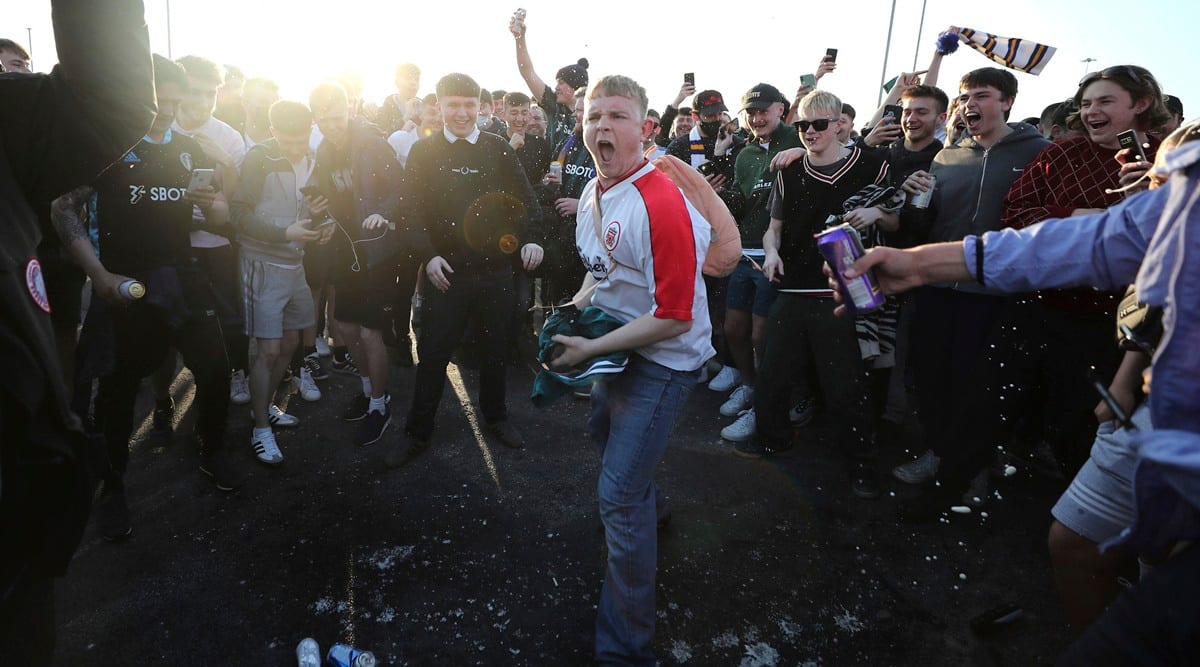 “We feel we can no longer give our support to a club which puts financial greed above integrity of the game,” said Spion Kop 1906, a Liverpool fans’ group which organizes the flags and banners on the famous Kop stand inside Anfield. The group has asked Liverpool to take down the displays for the team’s next home game, against Newcastle on Saturday.

When the Liverpool bus arrived to Elland Road fans ran towards it. Hundreds turned up to protest against the plans to create the European Superleague ahead of the Leeds vs Liverpool game. #CapitalReports pic.twitter.com/cQgoL5lMCd

📢❌ Liverpool fans have gathered outside Elland Road to protest against the Super League…#LFC | #LEELIVpic.twitter.com/z3GclZ52VG

The owners of “the dirty dozen” — as some are calling the rebel clubs — are staying quiet as soccer reels from their behind-the-scenes pact. Their only mouthpieces are the teams’ coaches, who must speak to the media before and after matches.

Liverpool manager Jurgen Klopp looked uncomfortable as he was asked what he thought of a Super League project he openly condemned back in 2019.

“I obviously have no issue with the Champions League,” he said. “I like the competitive fact of football.” 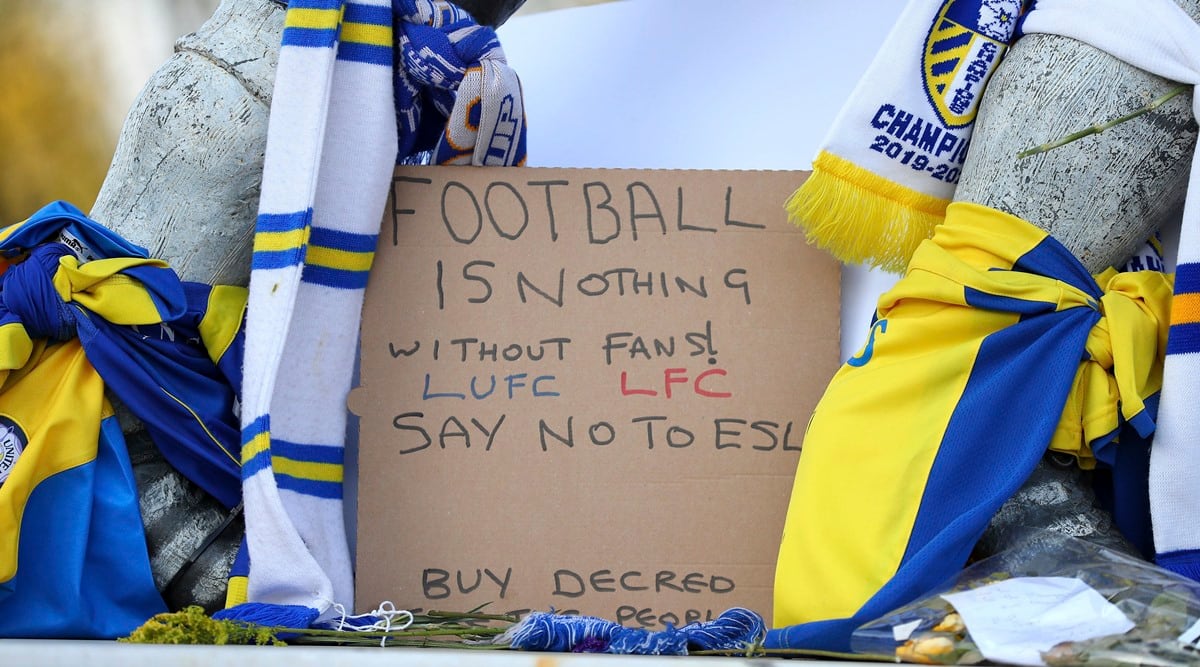 Close up of a banner as fans protest outside Elland Road. (AP)

Chelsea manager Thomas Tuchel was more guarded, saying he trusted his club’s board to make the right decisions even though he admitted to not being briefed about any plans for a breakaway.

“We are employees of the club, I think it’s best if we don’t get involved in sports politics in this situation,” Tuchel said in a video call on Monday. “It’s above our heads, clearly.”

Another of the breakaway clubs’ coaches, Atlético Madrid’s Diego Simeone, said he would be “prepared to coach wherever they tell me to coach.”

“I have no doubt that the club will decide what is best,” he said late Sunday after Atlético’s 5-0 win over Eibar.

Many others aren’t so sure, with reaction to the proposals ranging from humor and sarcasm to outright condemnation and fury.

The general tone of the reaction was downright disgust.

“Yesterday, the current board of (Tottenham) betrayed the club, its history and the magic that makes this game so special when they put their name to a statement announcing the formation of a breakaway European Super League,” the Tottenham Hotspur Supporters’ Trust said in a statement.

The group said Tottenham’s board was “prepared to risk the club’s reputation and its future in the opportunistic pursuit of greed” and called for a change of ownership if Tottenham did not immediately disassociate itself from the breakaway league.

Gary Neville, the former Manchester United defender who is now a commentator and owner of fourth-division English club Salford, described those running the breakaway clubs as “imposters” and called for the Premier League to punish the six English clubs involved with point deductions.

“They’re breaking away to a competition they can’t be relegated from? It’s an absolute disgrace,” Neville said in an impassioned rant on Sky Sports.

“We have to wrestle back power in this country from the clubs at the top of this league — and that includes my club,” he said, referencing American-owned United.

Former Man United midfielder Ander Herrera is one of the few current players to speak out against the proposal. Herrera plays for Paris Saint-Germain, the French champion which is so far refusing to take part in the Super League alongside big clubs in Germany like Bayern Munich and Borussia Dortmund.

“I believe in an improved Champions League,” Herrera told his 2.7 million followers on Twitter, “but not in the rich stealing what the people created, which is nothing other than the most beautiful sport on the planet.”

French clubs got a pat on the back from the country’s president, Emmanuel Macron, whose office said the proposed league “threatens the principal of solidarity and sporting merit.” The French government’s sports minister, Roxana Maracineanu, criticized the proposed breakaway as “a VIP club to conquer the world, but a world conquest based only on marketing and sales, not sport.”

The plan to rip up European soccer is being fronted by mostly foreign-owned clubs but one team with North American leadership was happy to announce its intention to keep the status quo.

“Despite the club’s two 4-0 victories this week, we can confirm that we will not be seeking membership to the newly uncovered ‘European Super League,’” read a post on Twitter from Welsh club Wrexham, which plays in England’s fifth division and was recently taken over by Hollywood stars Ryan Reynolds and Rob McElhenney.

“The club,” it continued dryly, “will be making no further comment.”

Russian club Spartak Moscow turned directly to any fans from the 12 breakaway clubs who might be disgruntled by the developments.

“If you need a new club to support, we’re always here for you,” Spartak said. “Kind regards, FC Spartak Moscow.”

In Spain, Real Betis published its own updated version of the league standings on the home page of its website, removing the three teams who have signed up to join the Super League: The current top three of Atlético, Real Madrid and Barcelona.

That left Betis in third place in the club’s revised standings and its big local rival, Sevilla, in first.

“They can be assured that this won’t happen,”