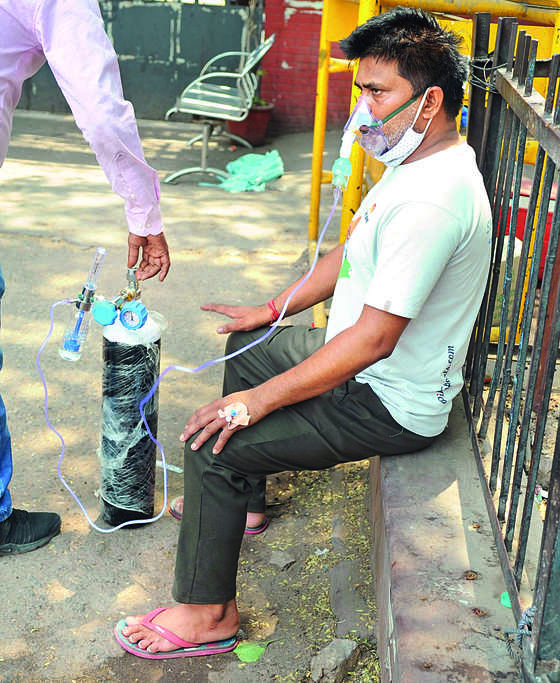 New Delhi: The Delhi government has put in place measures to tackle the oxygen crisis that the capital is facing. A team has been formed to monitor the Covid-19 situation and plans are in place on how the government is going to deal with the oxygen shortage being faced in the city, it said in a statement.

The government said that to meet the challenges thrown by the emergency situation and to ensure steady supply of oxygen to all hospitals and other healthcare facilities, a dedicated team of seven IAS officials has been planned.

Delhi is going to receive five additional oxygen tankers from Indian Oil Corporation Ltd, the government said in the statement. On Sunday, the city received 120 metric tonnes of liquid oxygen through the second ‘Oxygen Express’ that arrived from Eastern Railway.

The government also said that as per directions of Delhi High Court, an official of the Delhi government had been deployed in an oxygen plant in Faridabad, Haryana to ensure timely oxygen supply from there to Delhi.

The Delhi government said that an important meeting was held with the Indian Air Force, rail ministry and senior central government officials to solve the problems related to the oxygen crisis in the capital. In the statement, the state government said that the Centre had taken additional steps and the Union ministry of commerce & industry had appointed an official of additional secretary rank as nodal officer for oxygen supply in Delhi. “This will help in keeping an eye on the oxygen situation in Delhi in real time. The Ministry of Home Affairs is also in touch with our officials to ensure that Delhi’s requirement for oxygen is adequately met.”

The Delhi government said that bringing oxygen tankers from different parts of the country to Delhi had brought up some logistical issues as Delhi didn’t have oxygen production facilities of its own and officials were working hard to ensure that supply chain was maintained.

To ensure that there are no obstacles in oxygen supply, a team of officials has been deployed and a team is looking into all oxygen-related SOS messages. All the 11 district magistrates of Delhi have been asked to ensure proper oxygen cylinder distribution. This is an unprecedented situation and there is a need to deal with the dynamic situation with emerging developments, the government said.