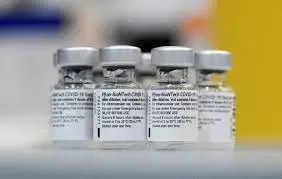 Washington: The US Food and Drug Administration advisory (FDA) committee on Friday (local time) voted unanimously to authorize Pfizer booster shots for use in people aged 65-plus and high-risk patients following a prior failed vote to approve third shots for all people aged 16 and above.

“It’s likely beneficial, in my opinion, for the elderly, and may eventually be indicated for the general population. I just don’t think we’re there yet in terms of the data,” said Dr Ofer Levy, a vaccine and infectious disease specialist at Boston Children’s Hospital.

The Vaccines and Related Biological Products Advisory Committee met for more than eight hours on Friday to discuss boosters, and the final vote could be amended to include health care workers and other workers who face a high risk of exposure.

The panel voted 16-2 against distributing the vaccines to Americans 16 and older, before unanimously embracing an alternate plan to give boosters to older Americans and those at a high risk of suffering from severe illness if they get the virus.

That’s previously included people with diabetes, heart disease, obesity and other so-called comorbidities. The initial question, posed by Pfizer, would have made the booster available to everyone aged 16 and above.

In a somewhat unprecedented move, because of its reservations around the question of boosters, the committee decided to first hold an up-or-down vote on the question of whether to recommend a third dose of vaccine for everyone 16 and older.

Biden administration officials have previously announced a plan to begin administering booster doses to the general population during the week of September 20, pending signoff from the FDA and US Centers for Disease Control.

Some of the advisers — a group of vaccine experts, immunologists, paediatricians, infectious disease specialists and public health experts — have said the process was rushed because of that target date.

Third doses are already approved for certain immuno-compromised people, but not for the general public.

World dsj1031 - October 18, 2021 0
Officials say GDP grew at its slowest place in a year in the third quarter, amid power cuts, property woes and COVID-19 concerns.China’s...