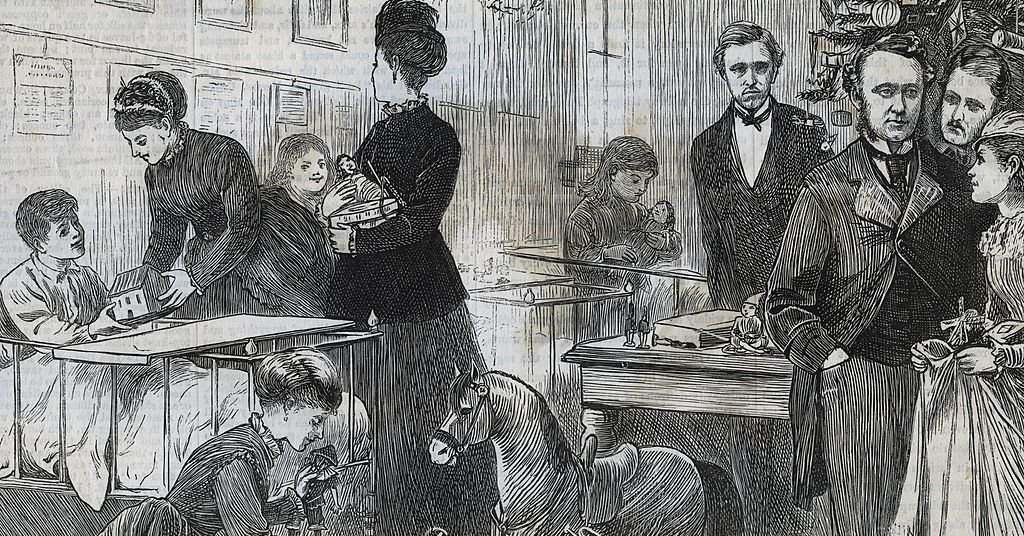 Gather around, children, and let me tell you the — false — legend of the Christmas diphtheria antitoxin miracle. I’ve just finished a book about the end of many kinds of childhood mortality, and got caught up in this tale that is often said to have happened on Christmas 1891, in Berlin.

Here’s the story, which is still passed around in various forms but which has largely been debunked: The first child ever to receive the new diphtheria antitoxin, which was the first antimicrobial agent to emerge from the relatively new science of bacteriology, was a nameless 8-year-old boy — or a sick little girl — or maybe an infant — critically ill with diphtheria, who was given a dose of the experimental new antitoxin developed by Dr. Emil von Behring, a German physiologist. The child was treated by a staff doctor, Dr. Geissler, roused from his slumbers to make his way through the snow with the magic medication, and the child made a dramatic recovery.

I’ve never seen a case of diphtheria; by the time I went to medical school, in the 1980s, it was already a historical disease in most developed countries, prevented by the routine series of vaccinations which starts when children are 2 months old (diphtheria is the “D” in the DTaP vaccine; the T is tetanus, and the P is pertussis, or whooping cough). It’s an infection of the throat and tonsils, which can start out looking like a routine sore throat with a low-grade fever.

What we needed to memorize as medical students as the hallmark of the disease was the danger of the “pseudomembrane,” a thick gray sheet of dead cells which can form in the throat, choking off the airway. The pseudomembrane develops because the bacteria that cause the disease, Corynebacterium diphtheriae, make a potent toxin, a poison that spreads in the blood and destroys the cells that line the mouth and pharynx, creating the debris of the pseudomembrane (it can also damage the heart and kidneys).

Children, with their small airways, were particularly susceptible to the dangers of diphtheria (and any respiratory infection). Toward the end of the 19th century, the doctor’s option was to stand by and watch them suffocate or, as a last resort, to perform a tracheotomy, cutting a hole into the airway. It was a last resort because it was so dangerous; between the diphtheria and the surgery, survival odds were low for kids who got that sick.

There were severe diphtheria epidemics in the second half of the 19th century, with high mortality rates, but no one knew what actually was causing the infection until 1883, when the bacterium was identified by Edwin Klebs, a pathologist working in Switzerland; one year later, Friedrich Loeffler, a German bacteriologist, was able to grow what became known as the Klebs-Loeffler bacterium in culture, and then to confirm that it caused diphtheria by injecting it into guinea pigs, rabbits, horses and dogs.

Scientists were also able to show that what did the damage was a poison, rather than the organisms themselves — even if all the bacteria were removed from the culture fluid, the fluid was still dangerous and capable of causing the disease. Building on that work, in 1890, Behring and his Japanese colleague, Dr. Shibasaburo Kitasato, developed what they would ultimately call antitoxins to diphtheria and to tetanus, another dangerous organism that does its damage by producing a toxin.

Behring had been an army surgeon and then gone to work as a researcher in bacteriology. The great contribution of the work he did with Kitasato was to show that animals produce specific substances in response to the toxin, which can neutralize the effects. In so doing, they had developed a theory of how the immune system works that would change medicine and medical therapy; in 1901, Behring would win the first Nobel Prize in medicine for his work.

Understand, they had not made an antibiotic that would actually attack the bacteria, but they had gotten infected animals — in this case, guinea pigs, to make antibody, their immune systems’ biological defense against the poison. The guinea pigs were injected with diphtheria toxin that had been inactivated by heating it — so they didn’t get sick, but their immune systems still recognized the substance, reacted and made the antitoxin. When those same animals were exposed to virulent diphtheria bacteria making potent active toxin, they were resistant, and an extract of their blood could be injected into other guinea pigs, and transmitted the ability to withstand infection.

The guinea pig serum could, in theory, then be injected into a human patient with diphtheria, and the antitoxin should neutralize the bacterial poison. So this is how we get to the Christmas story, which is still recounted somewhat breathlessly in many stories of heroic science. It was sufficiently famous that it has been subjected to a good deal of careful analysis, but it seems to be largely apocryphal. A 2005 book by Derek S. Linton traces the elements of the story, which reflects some early human trials with the antitoxin possibly undertaken in December 1891 and January 1892, and some tensions between Behring, who was hesitant to begin human trials, and Dr. Ernst von Bergmann, the surgeon who oversaw the hospital in question.

Bergmann apparently did allow some children to be treated with the antitoxin in January, while Behring was away, but there was no experimental control group of untreated children, and it was impossible to tell how well the serum worked; Behring himself felt that the time was not yet right for such trials and stopped them when he returned to Berlin. And Geissler may in fact have injected some children earlier in December.

So what meaning and morals do we draw from this Christmas story, in which a nameless child was saved by doctors supposedly coming in at night to give an injection of a new and experimental substance? First of all, we can give sincere and hearty thanks for the disappearance of diphtheria, a disease that once hung in the shadow of every child’s sore throat, but which was successfully defeated by immunization programs that took off in the decades before the Second World War.

And we can reflect on the victories of microbiology, pharmacology and vaccine science which keep all of us — and all our children — safe from illnesses now so far away that we worry about them more in a spelling bee than in an emergency room (that extra “H” in diphtheria has been the downfall of many a speller).

We worry now — very legitimately — about overuse of antibiotics, and we worry more than ever about how to communicate the importance of vaccines, in a world where all kinds of misinformation is freely available and sometimes even “officially” packaged. But the bottom-line truth is, you sit at home with your feverish child and you don’t have to worry about dying from diphtheria. We look at sick kids in the clinic and we don’t have to worry about this one.

And the diphtheria antitoxin was the first specific antibacterial therapy to come out of bacteriology. It reflected a new understanding of how diseases were caused, and of how the immune system functioned, and the beginning of the ability to turn on immune defenses very specifically against dangerous invaders, which would be the key, in the future, to using vaccines to keep children safe. The real news was that there were new weapons against the infections that attacked children, and it’s not hard to see why that seemed like a Christmas miracle.

Hundreds of Asda workers have descended on the company's headquarters to demand it backs down over the imposition of new contracts. Staff who fail to...

The Loneliness of Frontotemporal Dementia

Jennifer Lawrence’s Wedding Dress Reportedly Had Its Own Hotel Room