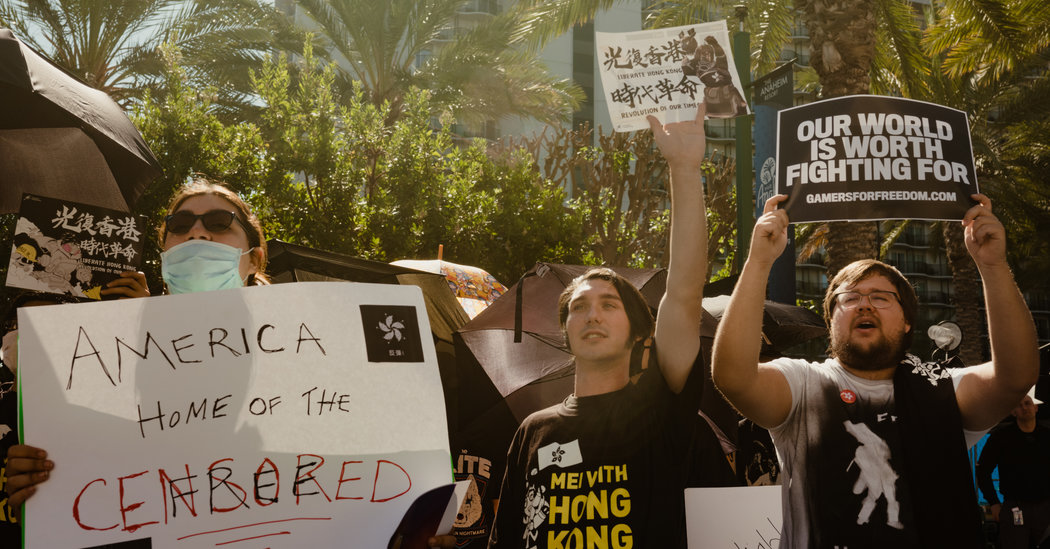 Gamers revolted last month when Activision Blizzard, the company behind some of the world’s most popular video games, punished a player for voicing support for the pro-democracy protests in Hong Kong.

Now, BlizzCon, the highly anticipated annual convention run by the company’s Blizzard Entertainment division, may be disrupted by demonstrations.

Here’s the latest on the controversy and what to expect.

What sparked the backlash?

In early October, Blizzard hosted a tournament for the Asia-Pacific region for Hearthstone, a strategy card game. During a post-match interview with the company’s Taiwan stream, Chung Ng Wai, a professional player in Hong Kong, spoke out in support of the pro-democracy and anti-China protests there.

Sporting ballistic goggles and a gas mask — accessories often worn by the demonstrators — Mr. Chung shouted in Mandarin: “Liberate Hong Kong, revolution of our times,” echoing a popular protest slogan. Days later, Blizzard, which also makes the popular game Overwatch, announced that Mr. Chung had violated competition rules against offending “a portion or group of the public.” As a result, the company said he would be punished by being stripped of $10,000 in winnings and barred from the game for a year. It also suspended the hosts of that live stream.

What was the reaction?

Criticism of the move was swift and intense, with many accusing the company of being motivated by business interests in China. (Tencent, the Chinese internet giant, owns a stake in Activision Blizzard.)

Gamers posted angrily on social media; an anti-Blizzard boycott trended on Twitter; company employees staged a walkout and at least one creator of the immensely popular World of Warcraft said he had canceled his personal subscription to the game.

Senator Marco Rubio, a Republican, weighed in, as did Senator Ron Wyden, a Democrat who said on Twitter that Blizzard had shown it was “willing to humiliate itself to please the Chinese Communist Party.” That criticism came as several other global businesses were accused by protesters of sympathizing with the authoritarian Chinese Communist Party.

A spokeswoman for Mitsubishi, whose logo was front and center in the stream of Mr. Chung’s interview, told The Daily Beast that the company had decided to end its sponsorship of Blizzard esports events.

Days after announcing the punishment, Blizzard’s president, J. Allen Brack, walked it back in a lengthy letter, reducing Mr. Chung’s suspension to six months and allowing him to keep his winnings.

At BlizzCon, the annual convention, Blizzard typically debuts new games and rewards die-hard fans with insider knowledge and events. This year’s convention is being held this week in California at the Anaheim Convention Center near Disneyland.

Mr. Brack addressed the controversy before the opening ceremony on Friday, shortly before planned demonstrations outside.

“Blizzard had the opportunity to bring the world together in a tough Hearthstone esports moment about a month ago and we did not,” he said in a live stream of the event. “We moved too quickly in our decision-making and then, to make matters worse, we were too slow to talk with all of you.”

Mr. Brack said the company would “do better” going forward, but did not say whether it would change any policies or implement new ones.

According to a news release, a group called Gamers for Freedom — a project by Fight for the Future, a nonprofit that seeks to uphold freedom of expression online — had partnered with the activist group Freedom Hong Kong to protest the event.

A demonstration outside the convention center was planned from noon to 3 p.m. local time and the groups intended to distribute several thousand “Freedom Hong Kong” T-shirts to attendees and protesters throughout the day. Featured afternoon speakers include two members of the American University Hearthstone team, which had been barred from competing after speaking out in support of Mr. Chung.

Some demonstrators dressed as Winnie-the-Pooh, a character that is censored in China after it was used to mock President Xi Jinping online.

Employees typically look forward to the annual event, but recent layoffs and the public relations fallout over the Hong Kong protest decision have affected morale for some, The Los Angeles Times reported on Thursday.

Prodding Mets to Spend More, Fans Have a Message: We’ll Venmo You

Coping With Kobe Grief: ‘There’s No Giving Advice on This’

Michael R. Bloomberg said on Tuesday that his presidential campaign would no longer work with a vendor after learning of a subcontractor that had...

The $7bn train deal that could threaten UK jobs

BlizzCon Is Today. Here’s Why Gamers Are Protesting It for Hong...