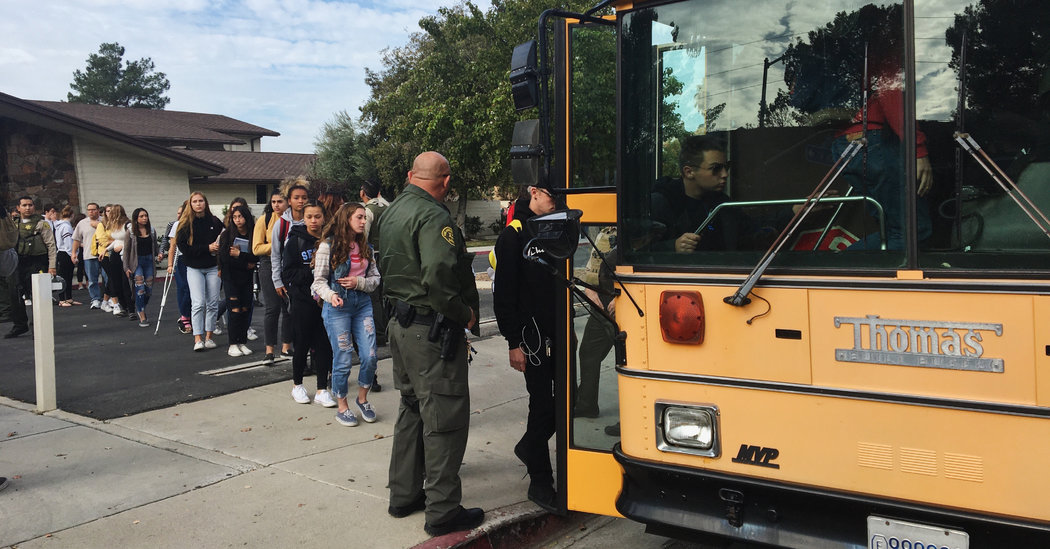 Two people were killed and three more injured when a gunman opened fire at a high school in Santa Clarita, Calif., on Thursday, the authorities said.

The police said one suspect was in custody after the shooting, which happened at Saugus High School on Thursday morning.

[Read live updates on the shooting.]

Here is what we know so far about the shooting, the gunman and the victims.

The gunman and all of the victims were students

The police said a suspect described as a 16-year-old male student at the high school went there on Thursday morning, pulled a handgun from a backpack and shot five people before shooting himself in the head. Thursday was his birthday, the police said.

All of the victims were students at the high school; two were killed while three were injured by gunfire, the police said.

The shooting happened early in the school day

The gunman opened fire in the school’s quad just after 7:30 a.m. on Thursday with a .45-caliber semiautomatic pistol, said Capt. Kent Wegener of the Los Angeles County Sheriff’s Department. Santa Clarita is a suburban community north of Los Angeles.

Captain Wegener said the shooting was captured on video. There were no more bullets in the gun when it was recovered, he said.

One parent said he first learned of the shooting when one of his sons called him; his other son told him by text that he and other classmates had barricaded themselves in a classroom. Several students said in interviews that they had prepared for the possibility of a shooting with in-school drills.

Samuel Arreaza, 15, a sophomore, said he “grew up knowing this is a thing that happens.”

The police have not publicly identified the suspect

The police said that medical workers transported the suspect to the hospital, where he was in grave condition, before the police had identified him.

Captain Wegener said that officers searched his home, which is near the school, and that the gunman’s girlfriend and mother were with detectives.

A School Is Training Its New Team Mascot. It’s a Puppy

INDIANAPOLIS — The star-in-waiting could not exactly hustle to class at the strip mall. “Is he asleep?” Evan Krauss, a mascot handler, asked his wife...

Should I Tell My Boss I Have a Disabling Medical Condition?

Hospitality Workers Union Estimates 80% To 90% Of Members Will Lose...