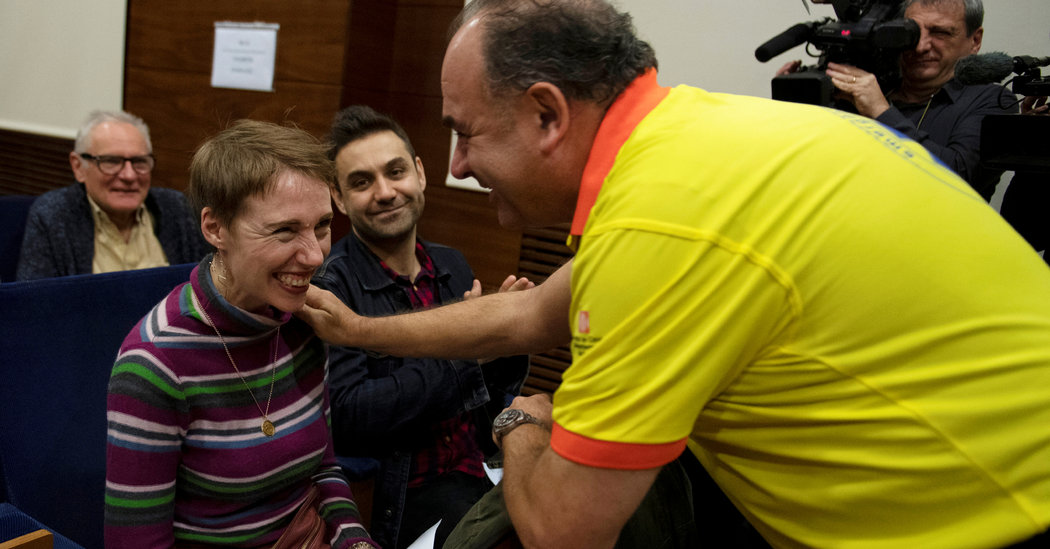 LONDON — Audrey Mash arrived at a Spanish hospital cold to the touch and all but dead: Her heart had stopped beating hours earlier, as she clung to her husband in a mountain snowstorm and her body temperature collapsed.

But the cold that nearly killed her also helped to save her life. After six hours in cardiac arrest she began to breathe again, rescued by doctors who said that her hypothermic condition — almost 35 degrees below normal — protected her brain from fatal damage.

“If she had been in cardiac arrest for that long with a normal body temperature, she would have died,” said Dr. Eduard Argudo, who helped treat her, in an interview Friday.

Instead, Ms. Mash, 34, stepped out to a news conference in Barcelona on Thursday, smiling alongside the doctors and rescue team that had worked to save her life. She said she felt happy and grateful to be alive.

Her near-death experience will go down as one of the most extreme on record, and Dr. Argudo said it was a record at least in Spain: the longest case of cardiac arrest in which the patient survived.

Ms. Mash and her husband had gone on a hike in the Spanish Pyrenees in early November when rain turned to surprise snow on the trail. They lost their way in the blinding weather and tried to find shelter from the wind and cold.

Though they held each other for warmth, she developed severe hypothermia and went into cardiac arrest. First she began to “talk nonsense,” her husband, Rohan Schoeman, told the Catalan news Channel TV3. Then she had trouble moving. Finally she fell unconscious.

By the time the emergency workers rescued the couple, her body temperature was 64 degrees Fahrenheit, well below the average 98.6. A helicopter rescue team airlifted her to the Vall d’Hebron Hospital in Barcelona and doctors hurried to try to save her, though she was by all appearances dead.

“She was blue and cold and she had no vital signs,” said Dr. Argudo, who had been called back to the hospital to help with the unusual case.

The doctors thought that they had a chance: Although the cold had stopped Ms. Mash’s heart, it also protected her brain and other organs from the damage. Dr. Argudo’s team deployed a specialized tool — normally used for infants with breathing or heart problems — that had never been used in Spain for someone in Ms. Mash’s state.

The tool, an extracorporeal membrane oxygenation machine, known as Ecmo, takes blood from the patient, infuses it with oxygen and then reintroduces it to the body and circulates it through the bloodstream.

It also allows doctors to control the blood’s temperature, which they slowly increased until Ms. Mash’s body temperature reached a point where they could use a defibrillator to shock her heart into beating normally again.

The medical team had prepared her husband for the possibility that she could show brain damage when she woke up, but that fear was dispelled when she was taken off sedation two days after the rescue.

“We were really happy and surprised when she woke up and immediately asked, ‘What am I doing here?’ and ‘Who are you?’ ” Dr. Jordi Riera, the director of the Ecmo program at the hospital, said in an interview.

Beating all expectations of a long period of healing, she has already made a near-full recovery. Ms. Mash was discharged from the hospital 12 days after her rescue.

Medical journals have long noted cases of people who emerged from yearslong comas. And medical studies of hypothermic cardiac arrests in Norway have explored the cases of patients who survived after their core body temperature dropped to 56 degrees Fahrenheit and they spent nearly seven hours in that condition.

She plans to return to work as an English-language teacher in Barcelona on Wednesday, but before that she will try to go for a run this weekend, she said in a phone interview on Friday.

Ms. Mash remembers nothing about the traumatic experience. Her last memory before waking up in the intensive care unit is of heading off to hike with her husband.

“People keep asking me how I feel it has changed me, but I do not have the memory,” she said in the interview. “I never considered the fact that I might die. But it is different for my husband and parents — they were in a very stressful situation.” The couple believe that Mr. Schoeman experienced possible mild hypothermia that did not require treatment.

Born in Britain, she spent part of her childhood in South Africa, where she met her husband, and has also lived in China. The couple moved to Barcelona two years ago.

She is a keen hiker and tries to go to the mountains with her husband at least once a month, and has previously trekked in the Himalayas. Doctors said that her experience there might have helped her to survive, in addition to her young age and active lifestyle.

The hypothermia has left Ms. Mash with some mobility and sensitivity issues in her fingers, which means she cannot do buttons or put earrings in on her own, she said, but she hopes that will improve.

She praised the 40 people involved in her rescue and medical treatment as “absolute heroes who should be in the limelight for this.” At the news conference, she called herself lucky. “I’m the one who didn’t have to do anything,” she said.

While near-death experiences can prompt some people to reassess their priorities in life, she said that was not her style.

“There is nothing I am going to be changing about my life,” Ms. Mash said. “I like my life. I have good friends; I love my job and my husband. If anything, it has made me realize how much I do not want to lose that.”

The experience has also not deterred her from one of her favorite activities.

“I hope that in spring we will be able to start hiking again,” Ms. Mash said. “I don’t want this to take away that hobby from me.”

But she will steer clear of the mountains in winter.

Courteney Cox Welcomes Jennifer Aniston To Instagram With A Season 1...

It’s been 25 years since Monica Geller helped Rachel Green cut up her dad’s credit cards and join the real world in the first...

McConnell Prefers to Hold ’Em, but Also Knows When to Fold...

On Politics: Where’s the Relief?

For Hilary Mantel, There’s No Time Like the Past