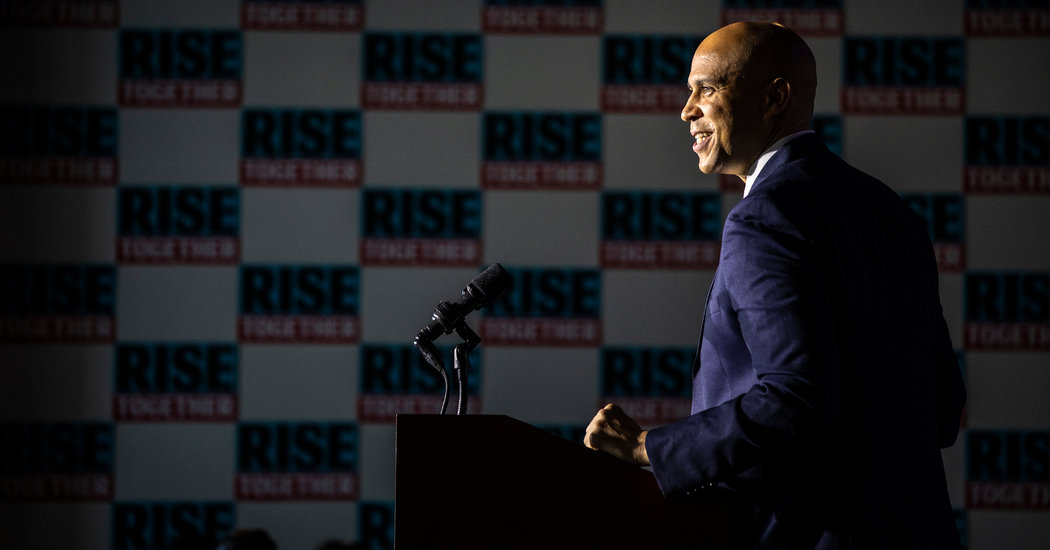 DES MOINES — Senator Cory Booker strode onstage here with a question, one that voters, activists and disgruntled members of the Democratic National Committee are also asking in the wake of Senator Kamala Harris’s sudden departure from the 2020 race.

In a year that began with the inauguration of the most diverse class of House Democrats, and quickly built to a barrier-breaking lineup of presidential candidates, do Democrats want an all-white slate of top-tier candidates to be the face of their party in 2020?

“What message is that sending that we heralded the most diverse field in our history and now we’re seeing people like her dropping out of this campaign?” Mr. Booker asked a crowd here Thursday morning. He added that Ms. Harris left the race “not because Iowa voters had the voice. Voters did not determine her destiny.”

With Ms. Harris out and Mr. Booker, the former housing secretary Julián Castro, Representative Tulsi Gabbard of Hawaii and the businessman Andrew Yang yet to qualify for the December debate, and former Gov. Deval Patrick of Massachusetts too late an entry to have a real shot at that stage, the Democratic primary is facing a reckoning. In two weeks, Democrats will gather in Los Angeles for a debate that is likely to feature an entirely white roster. That is not, several candidates and prominent party members say, how the party that emphasizes diversity and fairness should want to represent itself.

Some blame the rules for qualifying for the debates. The polling requirements give an advantage to candidates who can invest in extensive television advertising to get their name out. Others note, however, that the candidates of color in the 2020 field have not drawn significant support from black and Latino voters.

Mr. Booker has been particularly critical of the debate criteria this week. His criticism, of course, comes at a crucial juncture for his campaign, where missing the debate stage could prove unrecoverable. And while he makes universal appeals to reform the process, Mr. Booker also likely stands to gain the most by any change in rules or bump in polling following Ms. Harris’s exit.

The push for a more diverse field, and to connect with black voters, is of course directly linked to Mr. Booker’s campaign. He emphasizes his biography on the trail, and he spoke after the Thursday event of the pain his black family members expressed to him at feeling Ms. Harris had been held to an unfair standard.

“It’s really unfortunate that the party that’s seeking justice and fairness and inclusion has created a set of rules that can be undermined so easily, and also rules that don’t reflect ultimately what has determined outcomes here in Iowa,” Mr. Booker said in a news conference following his speech, taking explicit issue with billionaire candidates flooding airwaves to “juice their polling.”

In his hastily arranged speech, tacked onto his four-day swing in Iowa, Mr. Booker had the crowd of more than 150 applauding his calls for a more diverse slate. He made repeated pleas for support, even instructing voters not to screen their calls when it might be a pollster on the line.“Pick up the phone and answer, please. Choose me,” he said.

Both Mr. Booker and Mr. Castro have seen an increase in fund-raising in the days since Ms. Harris left the race. The Booker campaign said that Wednesday was its biggest online fund-raising day of the race, with 11,000 new donors.

Mr. Castro had his best fund-raising day in four months on Tuesday, and has pulled in roughly $360,000 in online donations since Ms. Harris dropped out. On Thursday, Mr. Castro said his campaign had reached the donor threshold for the December debate.

Still, given the requirement to reach 4 percent in four national polls or 6 percent in two early-state polls, it is extremely unlikely that either Mr. Booker or Mr. Castro will make the December debate stage. Inside Democratic circles, particularly among prominent African Americans and Latinos, there is a growing sense of unease that the debate rules, set by Tom Perez, the chairman of the Democratic National Committee, have disproportionally affected candidates of color.

“We have a system designed by our own Democratic National Committee that is not in any way intended to elevate the most qualified candidate but designed to elect the person with the most money or most access to it,” said Representative Marcia L. Fudge of Ohio, who was a supporter of Ms. Harris. “That’s why you’re going to see an all white debate stage.”

Some Democrats fear that an all-white debate stage later this month, or worse, an all-white final tier of candidates battling it out through months of primary contests, could undercut the party’s much-touted image as a bastion of diversity in the Trump era.

On Thursday, Mr. Booker focused mostly on the threat he believes the party faces if the demographics of its candidates do not reflect its voters.

“This is not about one candidate,” Mr. Booker said. “It is about the diverse coalition that is necessary to beat Donald Trump.”

Mr. Castro has been similarly critical this week.

“By not having anyone of color onstage, the party loses a lot,” he told reporters after a fund-raiser in Los Angeles on Tuesday. “The party also loses partly the ability to inspire and excite constituencies that we need to win in November 2020 against Donald Trump. And, you know, the D.N.C. ought to do some soul searching on these thresholds.”

In a call with reporters Thursday, Mr. Castro said that he was not asking for the rules to be changed before the December debate.

“I don’t want a handout by a rule change in the middle of the game,” he said. “That would be unfair to the people who are standing up there already.”

But the D.N.C. is still “making up their minds” for January, Mr. Castro added, suggesting that it return to the standards it set earlier in the year.

“Our process has resulted in more women and candidates of color participating in our primary debates than billionaires,” said Xochitl Hinojosa, a committee spokeswoman. “No one who has failed to reach 4 percent at this point in the race has ever gone on to be the nominee. Our debate criteria reflects this.”

Leah D. Daughtry, a longtime Democratic National Committee member who sits on the party’s rules committee, said she’s had a number of conversations in recent days with other members about how to change the system to include more candidates of color. No one has come up with a workable solution.

“I don’t know how you fix it now without upsetting the apple cart,” she said. “But it’s a problem. It’s a real problem.”

Some prominent Democrats say the party cannot be blamed for the failure of candidates of color to make the stage, placing responsibility on their inability to build momentum for their efforts — particularly among black and Latino voters.

A growing number of voters, especially younger black voters, have rejected the notion that mere representation equals the kind of change the Democratic base is hungry for. Polls have consistently shown the former vice president Joseph R. Biden Jr. leading among African-American voters, while Senator Bernie Sanders of Vermont is widely popular among Latinos.

“When people make the case that the standards and requirements should be lowered so that candidates of color can make the debate, as a Latina, I find that insulting,” said Maria Cardona, a former D.N.C. official. “The reason why the candidates right now are the ones at the top of the polls are because these are the candidates who are getting the majority of support from, guess who, voters of color.”

Some party officials dismiss the criticism of the debate criteria. Ms. Harris, they note, had qualified for the December debate but chose instead to drop out, they said.

“The D.N.C. announced their rules months ago. And I think anyone who decided to run understood that the party had rules,” said Donna Brazile, the former interim head of the committee. “I don’t know how you can blame the party for that.”

That is not how Mr. Booker and Mr. Castro say they see it.

Indeed, within hours of Ms. Harris’s announcement on Tuesday that she was suspending her campaign, Mr. Booker went on MSNBC, saying he was “a little angry, I have to say.”

“The way this is shaping up, especially with the rules of the D.N.C., it is preferencing millionaires and billionaires and a lot of other things that do not ever translate into viability in Iowa,” Mr. Booker said on Tuesday night.

Following Ms. Harris’s exit, prominent Democrats joined the growing chorus of support for Mr. Booker and Mr. Castro, not in outright endorsements of their candidacy, but for the need to continue to hear from a diverse set of candidates in the debates.

“Many good candidates have qualified,” Andrew Gillum, the former Democratic candidate for governor in Florida and a rising star in Democratic politics, wrote on Twitter. “But our diversity is our strength & our debates must reflect that fully.”

Mr. Gillum included links to donate to both Mr. Castro and Mr. Booker’s campaigns. Several other high profile Democrats made similar pleas on social media, leading to some surge of small-dollar support for both candidates.

Mr. Booker, who is set to barnstorm Iowa for the next several days, praised the state on Tuesday as the one who selected Barack Obama and set the path for the first black president.

The people who turned out to hear Mr. Booker speak on Thursday morning seemed to agree with his argument.

“I think the Democratic Party has really screwed this thing up,” said Brendan Comito, 52, of Des Moines, who said candidates he’s supported in the past, like John Kerry and Barack Obama, were down in the polls at this point but went on to win. “I think they’re knocking people out too early and they’re not leaving the best candidates around.”

“I want you to know that we are a nation right now that has an election to decide,” Mr. Booker said. “And Iowa, do not let anybody else decide it for you.”

He continued: “When you hear people say it’s the most important election of our lifetimes, turn around and tell them: ‘Act like it.’”

WASHINGTON — Senator Lisa Murkowski of Alaska expressed unease in an interview broadcast on Tuesday with the Senate majority leader’s vow of “total coordination”...