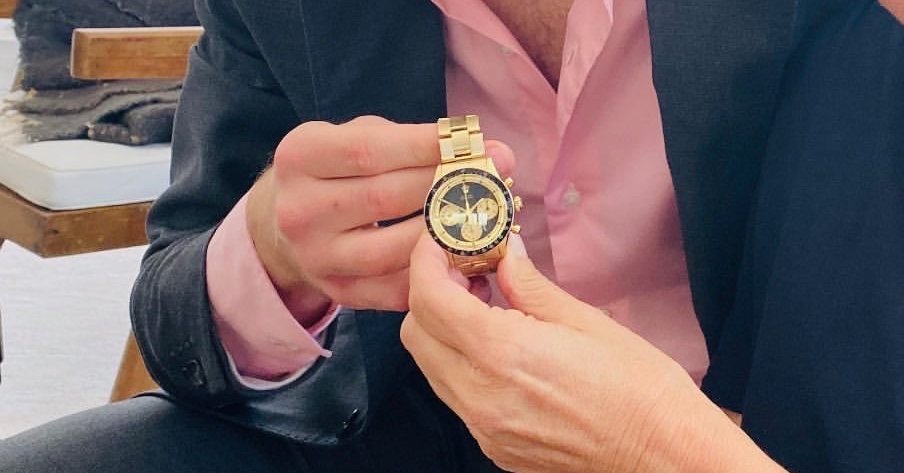 In the vintage watch market, few timepieces are more coveted than a late-1960s gold Rolex Daytona. So how much was obtaining one worth to Ellen DeGeneres, the watch-collecting chat show host and comedian?

About $750,000, a watch expert familiar with the deal said this week after an image of Ms. DeGeneres appeared on Instagram, sitting in her Modernist Beverly Hills home beside the dealer Jasper Lijfering, the watch in her hand.

Ms. DeGeneres entered wearing a new gold Rolex Daytona with a sunburst green dial, a current production model of the watch that has soared in value over the last year.

She exited carrying two stainless-steel “Big Red” Daytonas (one with a black dial; the other in silver), a 1950s Pepsi GMT (so named because the bezel is blue on top and red on the bottom) and a Patek Philippe Nautilus from the late ’70s.

This made the stop, conservatively, a $300,000 meet cute, though Mr. Lijfering declined to discuss any pricing and other dealers pointed out that she seems to be entering a point where she is no longer just shopping.

“The Nautilus she bought is a hard-core collector’s watch,” said Cameron Barr, the founder of the West Coast vintage watch emporium Craft & Tailored.

Ms. DeGeneres has also turned her serious knowledge of Modernist design into a multi-million-dollar side business, renovating and selling homes around Los Angeles as well as producing an elegant and insidery coffee table book about furniture and home décor.

After Ms. DeGeneres went to Amsterdam, she and Mr. Lijfering began texting and FaceTiming regularly, he said.

He flew to Los Angeles twice for visits in September. She showed him her assortment of new and old Patek Philippes and Rolexes. He added to it with the sale of a gold 1978 Submariner and another newer stainless-steel Daytona. He even sold Ms. DeGeneres an early ’70s silver-faced Milgauss (usually $25,000 to $30,000) that he said she gave away as a gift.

But the watch she told him she most coveted was a gold Paul Newman, so named because of a photograph of the actor wearing one.

Like all Daytonas, the Paul Newman is a mechanical cosmograph that functions as both timekeeper and glorified stopwatch, with three subdials that can be used by racecar drivers to measure distance and speed. The twist was its retro vibe, with Art Deco-style writing on the subdials.

The John Player Special, named after a ’70s-era Formula One car, is a variation with a gold case, gold bracelet, black dial, gold subdials and a black bezel insert.

When it first came out around 1966, with a retail price of about $700 (about $5,500 today), the John Player Special was considered to be “too playful and too fanciful,” according to Eric Wind, a high-end dealer in the United States and a walking encyclopedia of arcane vintage watch trivia. “It was not a commercial success,” he said.

The advent of rap music and the small number made — “in the hundreds,” said Ben Clymer, the editor of the watch site Hodinkee — helped fuel its revival.

The fact that Ms. DeGeneres bought it from Mr. Lijfering, a 26-year-old dealer who four years ago specialized in $3,000 Datejusts, was a surprise to people in the close-knit, highly competitive vintage scene.

But Mr. Lijfering, who has sold two other Paul Newmans in recent years, is a savvy and telegenic self-marketer.

His Instagram feed showcases his best available timepieces along with selfies taken aboard his friends’ private planes, in which he is wearing custom-made suits, six-figure watches and Tom Ford glasses. There is even a photo of him in an upscale hotel bathtub chugging champagne from the bottle. “That’s helped us build an international clientele,” he said of his feed. “Our approach is paying off.”

So, in October, after obtaining a John Player Special for Ms. DeGeneres, Mr. Lijfering returned to California to deliver it.

This time, he stayed at Ms. DeGeneres’s house in Beverly Hills, traveled with her to the set of her talk show and played poker with her backstage (“another thing we have in common,” he said).

Ms. DeGeneres has since told him the John Player is really the only watch she wants to wear, but he doesn’t buy it.

“Sooner or later that will pass,” he said. “If you love watches, you want to switch it up.”

Stars and Protesters at ‘West Side Story’ Opening

Harvey Weinstein Casts a Shadow on Dior and Saint Laurent

It’s Facebook vs. the Bloomberg Campaign vs. the Internet

WASHINGTON — The ghost of Howard H. Baker Jr., the Republican senator from Tennessee who turned against Richard M. Nixon during Watergate, is hovering...

So THAT’S Why Manuka Honey Costs So Much?