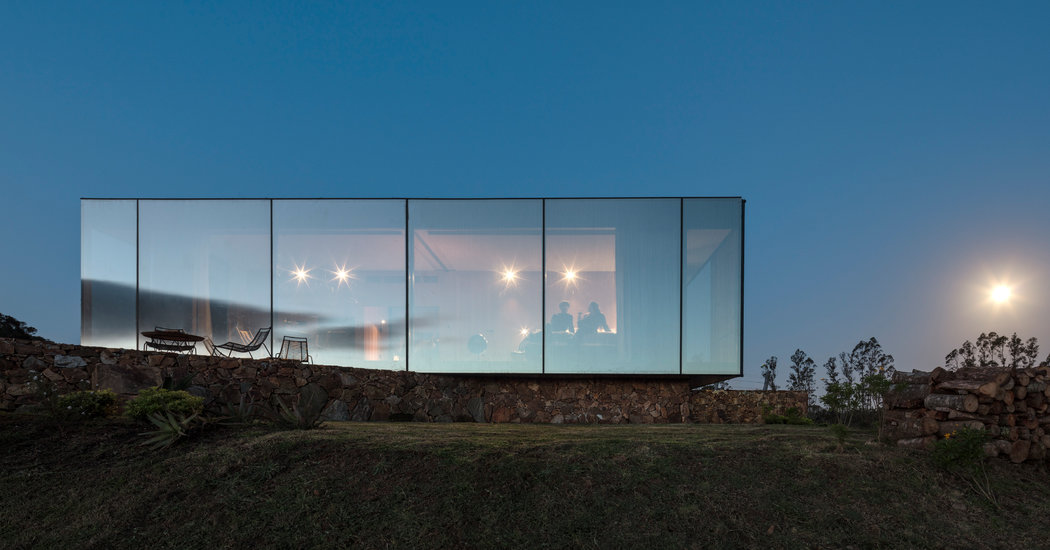 PUNTA DEL ESTE, Uruguay — Daniel Camdessus and Liliana Silberman have spent their vacations here since the 1960s. It’s where they fell in love as teenagers and promised each other that if they ever got married, they’d build a house near the town’s emblematic lighthouse, which sits on a cape jutting into Atlantic waves.

Three decades and two children later, when the Argentine couple finally had the money to design their dream summer retreat, they looked around at the neighborhood’s attractive houses — mostly pitched-roof constructions featuring Tudor or Tuscan influences — and decided to do something completely different.

“We’ve always been interested in modern architecture,” said Ms. Silberman, an interior decorator. “And we had been waiting for a long time to have this house, so we wanted it to be really special and to reflect our sensibilities.”

They hired Moscato Schere, a prestigious architecture studio in Buenos Aires, and asked it to come up with a minimalist, subdued design using stone, wood and concrete. The result — a 2,800-square-foot residence with massive walls made of jagged boulders and a wood-and-concrete terrace that looks like the deck of a sailboat — has been stopping passers-by in their tracks since 1997.

Mr. Camdessus and Ms. Silberman were architectural pioneers, but they weren’t the only ones. Coincidentally, a series of similar residences started to go up just outside downtown Punta del Este, near the less-populated beaches of La Barra, Manantiales and José Ignacio, a fishing enclave that was quietly evolving into a hub of barefoot luxury.

The style of these homes was both novel and intuitive. Their straight lines, austere colors and natural materials seemed to be in sync with the simplicity and ruggedness of the landscape of eastern Uruguay, where vast windswept beaches are backed by rolling grasslands interspersed with eucalyptus groves.

“The coast’s gentle, open landscape really lends itself to these minimalist boxes with horizontal glass panes offering wide views,” said Diego Capandeguy, a professor at the Faculty of Architecture, Design and Urbanism, the country’s premier architecture school. “On the inside, the views create a very serene atmosphere — it’s like admiring a landscape painting — and from the outside they look like sculptures that landed in the countryside or in between the sand dunes.”

Many of these “boxes,” which could also be described as understated mansions, are scattered along Route 10, a seaside road that connects Punta del Este with the village of José Ignacio. Some display Brutalist sensibilities, with severe slabs of exposed concrete; others, nearly devoid of opaqueness, call to mind Philip Johnson’s Glass House in New Canaan, Conn.

Prices for luxury homes in the region range from $300,000 to several million dollars. An oceanfront penthouse in Punta del Este, for example, is listed at $2.2 million.

Among the handful of architects who helped modernize the Uruguayan Riviera, no one has been more influential — or prolific — than Martín Gómez.

In 1990, not long after earning his degree in architecture from the University of Belgrano in Buenos Aires, he decided to set up a studio in Punta del Este (the economy in his native Argentina, just across the Río de la Plata from Uruguay, was experiencing one of its downturns, and jobs were scarce).

“I realized I needed to work within the modern movement and adapt it to the gorgeous natural surroundings of the coast,” he said. “At first it was hard for me to sell this idea, yet I felt strongly that Punta del Este had to reclaim the style that made it famous and fashionable in the first place, back in the midcentury.”

Punta del Este’s initial brush with fame came in the 1950s, after the creation of an international film festival that drew stars like Ava Gardner and the director Ingmar Bergman.

People started talking about the “St. Tropez of South America,” and demand for real estate surged. Several architecturally significant homes and condominiums were built around that time, many of them following the tenets of Midcentury Modernism, which was all the rage until the ’60s.

But as developers continued to flock there and find few restrictions (downtown “Punta” is now dotted with unbecoming apartment buildings standing taller than 10 stories), this once-glamorous resort started losing some of its coastal charm.

Mr. Gómez was determined to change that. In the last two decades, his studio has built more than 1,000 homes in the Maldonado region, which includes Punta del Este, José Ignacio and Pueblo Garzón, a tiny countryside enclave with a winery and two restaurants run by the celebrity chef Francis Mallmann.

His designs are typically rectangular and built out of concrete, lapacho wood, stones from a local quarry and abundant glass. The materials are rarely painted or finished; they’re left in their natural state.

One of his most noteworthy projects is a 6,500-square-foot house called La Boyita (all properties have names in this corner of the world), built in 2009 on the grassy dunes of a secluded beach near Route 10. It is divided into five volumes or blocks, all with floor-to-ceiling views of the sea and tilted in a way that protects a large outdoor pool from the wind.

The house, which displays a very rustic kind of luxury, is a perfect example of the minimalist architecture that has continued to flourish on the eastern coast of Uruguay.

Mr. Gómez and other architects working in the area (including Diego Montero, another household name) have taken cues not just from the local landscape but also from the local culture: Uruguayans are known as laid back, unassuming and prone to frown on ostentation.

“There are no excesses here,” Mr. Capandeguy said. “The discretion of the scenery, which is categorical in its lack of grandiosity, extends to the people.”

It may seem contradictory, then, to see a section of Uruguay achieve such a high profile.

Yet the beaches of Maldonado have always been a bit of an anomaly, attracting Argentine movers and shakers — people who are not necessarily opposed to showing off — along with a combination of snowbirds and bons vivants from all over the world.

In recent years, a group of internationally acclaimed architects has unveiled projects in or near Punta del Este, including Isay Weinfeld, an important Brazilian modernist; the award-winning Chilean Mathias Klotz, known for his abstract volumes; and Stephania Kallos and Abigail Turin of Kallos Turin, a studio based in Britain and the United States.

And some of the most innovative new projects are homegrown. MAPA, founded in 2013 by three Uruguayan and two Brazilian architects, has been making waves with a series of partially prefabricated homes.

Their designs — often dramatically perched atop cantilevers and featuring sweeping sheets of glass, wooden slats and unevenly cut stones — include walls and other elements built in factories. This can reduce costs: MAPA’s homes run between $1,800 and $3,000 a square meter, compared with upward of $3,000 for traditional construction by an established architect.

But mostly it saves time. MAPA says it can complete a house in three to four months. Working with prefabricated structures also fits with the studio’s desire to explore new technologies while promoting a back-to-nature ethos. “We want our clients to feel connected to the landscape when they are inside our spaces,” said Mauricio López Franco, one of MAPA’s principals. “In that sense, we are turning industrial processes on their head.”

Among their recently completed projects is a rural cabin for Jamie Lisette, an American beverage-industry executive, and his family.

Mr. Lisette traveled to José Ignacio more than a year ago and was so impressed with the peaceful village that he decided to buy 50 acres nearby, on a stretch of rolling countryside leading to Pueblo Garzón. He hired MAPA to build something “minimalist” and “rustic.”

The result is a fairly straightforward rectangle with dark corrugated-metal walls and a deck covered in flaxen wood. Part of the house seems to rest on the grass, and another part seems to float above a downslope.

“You can drive for miles and not see a house, and then when you see something modern, it’s such a nice contrast,” said Mr. Lisette, who lives in Weston, Conn., with his wife and two children. “We wanted a bit of the old gaucho look, but much more sleek.”

Mattel, the company that conquered the doll world by dividing it into idealized Barbies and Kens, is introducing a new line of gender-neutral dolls...

Hollywood stars reveal how they keep busy while staying at home

Labour MPs who back Brexit deal should be replaced – senior...

University to Students on Medicaid: Buy Private Coverage, or Drop Out