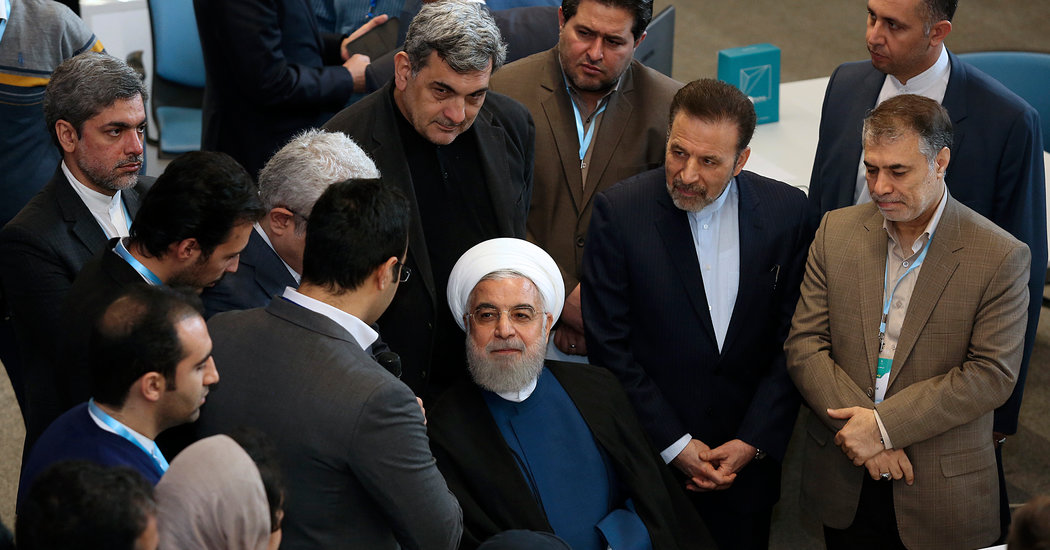 In an effort to counter American sanctions, Iran will pull further away from a landmark nuclear accord signed four years ago, President Hassan Rouhani said on Tuesday, announcing that the country would inject uranium gas into more than 1,000 centrifuges at a highly secure site that Iran initially hid from inspectors.

Injecting the gas into the centrifuges at the Fordow nuclear facility is a step toward uranium enrichment, which in turn moves Iran closer to being able to build a nuclear weapon, though it has denied harboring such ambitions.

President Trump withdrew the United States from the accord last year and imposed economic sanctions in an effort to put pressure on the government in Tehran. In response, Iran has taken several calibrated steps this year to exceed the limits the agreement had put on its nuclear program, while calling on Mr. Trump to reverse himself.

Iran will begin injecting uranium gas into the 1,044 centrifuges at the Fordow nuclear facility, Mr. Rouhani said; the 2015 agreement had restricted the centrifuges to uses other than nuclear enrichment.

The announcement came a day after Iran said it had doubled the number of more advanced centrifuges operating at its main nuclear plant, at Natanz, and planned to install even more efficient centrifuges.

The Iranian president portrayed the announcement on Tuesday — as well as three previous steps it had taken beyond the deal — as reversible, but Iran has made clear that it will only step back if the European signatories to the deal find a way to relieve the economic pressure caused by the American sanctions.

“Resistance lays the ground for negotiation, and negotiation takes advantage of resistance,” Mr. Rouhani said, according to the state-run IRNA news agency.

Iran has recently gone beyond the limitations of the nuclear agreement by increasing its nuclear stockpile, enriching uranium at higher levels, and enlarging the number of centrifuges in use. Fordow was built deep under a mountain outside the holy city of Qum, leaving it impervious to all but the biggest bunker-buster bombs in the United States arsenal, and Iran did not acknowledge its existence openly until 2009. The nuclear agreement allowed the centrifuges at the facility to remain in use on the condition that gas was not injected into them.

Iran might be able to produce enough fuel for a nuclear bomb in under a year, according to some analysts, and it was not immediately clear how the announcement on Tuesday would change the equation.

“Iran is pushing the red lines, as part of its own maximum pressure campaign to reverse Europe’s position. But Iran could have done more and they’re not,” she said. “This is still one those steps that Iran can reverse.”

Under the 2015 deal, Iran has been allowed to enrich uranium with 5,000 first-generation centrifuges, known as IR-1, at Natanz.

The additional 1,044 centrifuges at Fordow are also IR-1, which are seen by experts as antiquated. The more advanced centrifuges, known as IR-6, refine uranium 10 times faster, according to Iranian authorities, and Iran said on Monday that it had started injecting gas into them at the Natanz plant.

The American sanctions, which Mr. Rouhani described as “wrong, cruel and illegal,” delivered another blow to an already fragile Iranian economy, and the Iranian government has responded with what is effectively a two-track strategy.

The agreement was signed in 2015 by Iran and the United States, along with China, France, Russia, Britain, Germany and the European Union. Iran agreed to reduce the size of its nuclear program in exchange for relief from sanctions.

Mr. Trump, in withdrawing from the pact, reimposed old sanctions, and later added new ones. Iran has argued that it cannot abide by the deal as long as the sanctions are crippling its economy, while at the same time saying it would adhere to the agreement if the European partners to the nuclear agreement could lessen their effect.

The European signatories, which still support the deal, have sought to find ways to address the Iranian concerns but have been unable to come up with alternatives that satisfy Tehran without running afoul of the United States sanctions.Maja Kocijancic, a spokeswoman for the European Commission, the European Union’s executive arm, said the union was “concerned” about the announcement, urging Iran to reverse earlier breaches of the nuclear deal and refrain from any further moves that would undermine it.

Dmitri S. Peskov, the Kremlin spokesman, said that Russia would like to see the nuclear deal remain in force, but he also expressed sympathy for Iran, citing the “unprecedented and illegitimate sanctions” against it.

The United States recently extended a waiver from sanctions for foreign companies, including Russia’s state-run nuclear company, Rosatom, to continue work at the Fordow site, but Moscow does not expect the developments on Tuesday to affect its role there.

The Fordow fuel enrichment plant, unlike the facility at Natanz, it is too small to produce an effective amount of nuclear fuel for civilian purposes, leading the West to conclude that its purpose was to help create a nuclear weapon. Iran has consistently denied that it is seeking to build a bomb.

“We know their sensitivity with regard to Fordow” and the centrifuges, Mr. Rouhani said in a speech that was broadcast live to the nation, the state-run Press TV reported. “But at the same time when they uphold their commitments, we will cut off the gas again.”

Mr. Rouhani, who said the work at Fordow would be carried out under supervision of the International Atomic Energy Agency, the United Nations’ nuclear watchdog, expressed a willingness to restart nuclear talks if Washington returns to the deal and removes the sanctions.

Italy, Mired in Politics Over Virus, Asks How Much Testing Is Too Much

Secret Passage Dating to 1660 Is Found Inside U.K. Parliament

What to Watch in Yankees vs. Astros Game 4

Pregame Story Lines A full day of rain in New York on Wednesday pushed Game 4 back by one day, scrambling the pitching situation for...

Javid stands by proposed digital tax in face of US threats