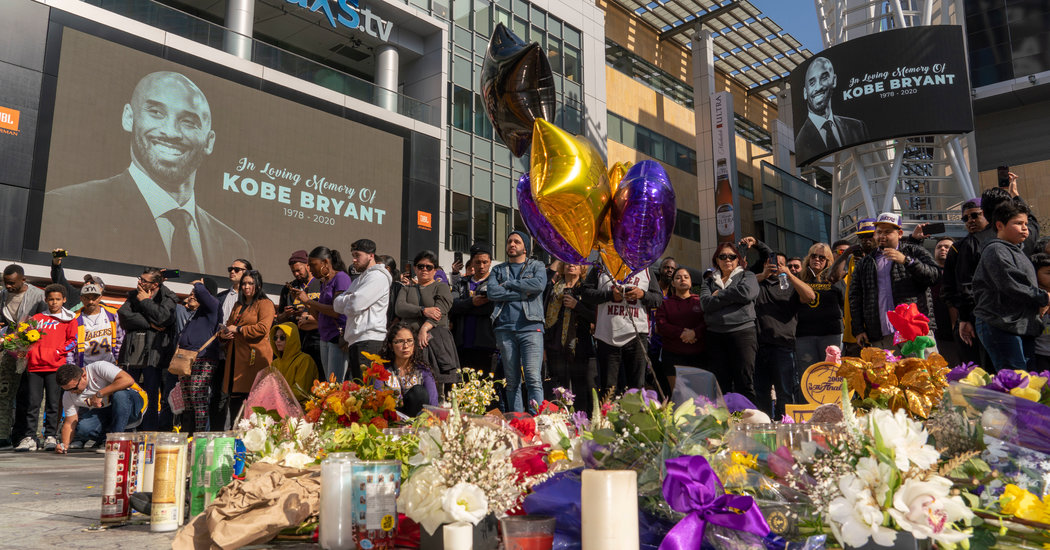 [Follow our live coverage and updates of Kobe Bryant’s memorial]

LOS ANGELES — For the bulk of his career with the Lakers, Kobe Bryant turned Staples Center into his stage, fashioning basketball into performance art. He soared and scowled, endearing himself to fans who celebrated his competitive drive. It is not often that an athlete becomes synonymous with an arena, but Staples Center seemed to belong to Bryant in a singular way.

“He helped build this arena,” said Lee Zeidman, the president of Staples Center since it opened in 1999.

In the wake of Bryant’s death last month, there was some discussion among family members, including his wife, Vanessa, and city officials about the site of a public memorial service, Zeidman said. An outdoor venue like the Rose Bowl, the Los Angeles Memorial Coliseum or Dodger Stadium would have been able to accommodate the most people.

“A lot of people were weighing in,” Zeidman said in an interview last week. “But for the men and women who work at Staples Center, we felt that this was the place to do it. He put five championship banners on the walls here. Both of his numbers are retired here. And we’re very proud and humbled that Vanessa chose to do it here.”

On Monday morning, about 20,000 people — celebrities, athletes, family members, fans and friends — will fill Staples Center to honor Bryant and his 13-year-old daughter, Gianna, who were among nine people killed in a helicopter crash on Jan. 26 near Calabasas, Calif.

The public memorial, called “A Celebration of Life for Kobe and Gianna Bryant,” is expected to run from about 10 a.m. to 12:30 p.m., Pacific time, Zeidman said, followed by several invitation-only receptions. An undisclosed number of tickets were sold to the general public through a lottery. Those who were unable to purchase tickets will not be permitted access to L.A. Live, the entertainment complex adjacent to Staples Center. Officials are discouraging people from trying to congregate near the arena.

But in a fitting tribute to Bryant, the memorial service will be bracketed by basketball: The Lakers played the Boston Celtics on Sunday at the arena, and the Clippers will face the Memphis Grizzlies there on Monday night.

Staples Center has hosted public memorial events in the past, including one for Michael Jackson in 2009 and another for Nipsey Hussle last year.

But Bryant had a unique relationship with Staples Center as the arena’s most magnetic draw for 17 consecutive years — and he formed ties to many who still work there.

Andy Bernstein, the longtime photographer for the Lakers who collaborated with Bryant on Bryant’s 2018 book, “The Mamba Mentality: How I Play,” was invited to attend Monday’s event as a guest. But Bernstein declined so he could work at the event in his usual role, as a photographer. It was what Bryant would have wanted him to do, he said.

Entering the weekend, Zeidman said the list of invited guests, speakers and performers was still “very fluid.” The Lakers and the Bryant family were coordinating the program, Zeidman said, and few details had been disclosed. Zeidman said he was not privy to many of them.

“There’s been virtually no information outside of instructions to save all of our dressing rooms,” he said.

A number of celebrities and athletes are expected to be on hand, including members of the Lakers and the Clippers, and former N.B.A. stars like Shaquille O’Neal and Kareem Abdul-Jabbar, the league’s career leading scorer. Stephen Curry of the Golden State Warriors and Luka Doncic of the Dallas Mavericks are among the current players who have said they will attend, along with Luke Walton, a Lakers teammate of Bryant’s who now coaches the Sacramento Kings.

Sabrina Ionescu, a guard for the University of Oregon women’s basketball team, told the Pac-12 Network that she was among those who had been invited to speak. Ionescu had grown close to Bryant, a vocal advocate for women’s sports in recent years, and to Gianna, who had dreamed of playing in the W.N.B.A.

“Just there to honor them and everything that they’ve done for me,” said Ionescu, who plans to rejoin her teammates in time for a game at Stanford on Monday night.

Players from the N.H.L.’s Los Angeles Kings and the W.N.B.A.’s Los Angeles Sparks will also attend the memorial, Zeidman said. The Kings and the Sparks play their home games at Staples Center, and both hang their various championship banners not far from those that Bryant helped win for the Lakers.

Zeidman said the Sparks’ banners had taken on added significance for him. When Bryant was courtside with Gianna to watch the Lakers play the Mavericks in December, he noticed that the Sparks’ banners were not illuminated. Bryant told Rob Pelinka, the Lakers’ vice president for basketball operations, to tell Zeidman that it bothered him, going so far as to call it an “injustice.”

“That was the last thing I heard from him,” Zeidman said. “So I’m going to figure out how to light those banners during Lakers games and other events that are here.”

In the week after the accident, Zeidman said, 250,000 to 350,000 people visited the plaza outside Staples Center to pay their respects to Bryant and the other victims. They shared their grief by leaving 1,300 basketballs, 500 handwritten notes, 350 pairs of sneakers and more flower bouquets than anyone could count.

The flowers will be turned into mulch that will be spread around L.A. Live in the next two weeks, Zeidman said. The rest of the offerings — all the sneakers and photographs and jerseys and stuffed animals — were cataloged and stored in 37 shipping containers.

“We saved all of it,” Zeidman said. “We’re just waiting for direction from the Bryant family and from the Lakers on what they’d like to do with it all.”

Ahead of Monday’s memorial event, Zeidman has found himself reminiscing. He recalled Bryant’s final game for the Lakers, in 2016, when luminaries such as Jack Nicholson, Jay-Z, Snoop Dogg and Kanye West turned out at Staples Center. They watched Bryant miss his first five shots. Zeidman turned to Tim Harris, an executive with the Lakers.

“Man, this is not starting well,” Zeidman recalled telling Harris.

But Bryant, as usual, was undeterred. He kept shooting — and shooting. He finished with 60 points on 50 shots in a narrow win, ensuring that he went out in style.

A few days after Bryant died, Zeidman watched a replay of the game. He cried, he said, every time the camera panned to Bryant’s wife and daughters.

Half the World Is On Lockdown. For Sports? More Like 99 Percent.

When Lizzie McGuire sang, “This is what dreams are made of!” we’re not sure that meant carrying a stuffed alpaca through New York City. Snapshots...

Michael Bloomberg, a Billionaire Learning on the Job