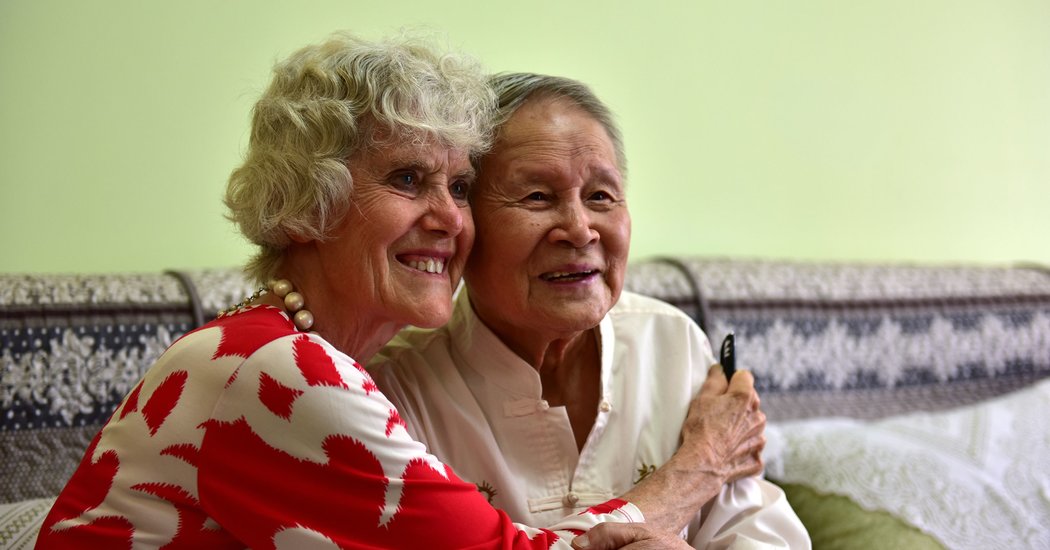 Mary Taylor Previte lived a life of self-reinvention, becoming a teacher, a lauded administrator of a center for troubled youths and a New Jersey legislator. But perhaps her most transformative experience was one of imprisonment and liberation during World War II, and then what came afterward.

Ms. Previte, as a daughter of missionaries, spent more than three years of her childhood in a Japanese concentration camp in occupied China, until a team of six American paratroopers and their Chinese translator rescued her at the end of the war.

She never forgot them.

Even more, she resolved to find them and thank them face to face.

For two years, starting in 1997, Ms. Previte (rhymes with “brevity”) crisscrossed the United States in her search for her saviors. Of the seven, two had died. She found four. It would take her 18 more years to find the last one, Wang Cheng-Han, the Chinese interpreter, who by then was 91 and the only one still living. In 2016, she flew to China to reunite with him.

”All these years I wondered who would dare jump from a low-flying bomber and rescue people they don’t know,” she told The Philadelphia Inquirer before the reunion in China. “I wanted to find out, What makes people become a hero?”

Ms. Previte died on Nov. 16 at 87 in a hospital in Camden, N.J. She had never recovered from injuries she sustained after being struck by a car on Nov. 11 while on a morning walk in her hometown, Haddonfield, N.J., her daughter, Alice Ann Previte, said.

Ms. Previte was a 12-year-old detainee named Mary Taylor when American intelligence officers learned that Japan planned to kill the prisoners in China as well as those in Korea and Manchuria. Rescue operations became a priority, and the O.S.S., the precursor to the C.I.A., organized multiple seven-man airborne rescue missions.

On Aug. 15, 1945, Japan surrendered to the Allies, but the news did not reach the inmates at many of the camps, including the one where Mary was being held, Weihsien, the largest one in China. The O.S.S. pressed forward with its rescue missions.

On Aug. 17, the paratroopers dropped from the sky over Weihsien, and the Japanese guards put up no resistance. The paratroopers marched in to a hero’s welcome, freeing Mary and her nearly 2,000 fellow prisoners.

“They were gorgeous, sun-bronzed American gods with meat on their bones,” Ms. Previte would write of the paratroopers years later.

Before the camp could be evacuated, the men cared for the children and taught them songs, including “You Are My Sunshine.” Mary got their autographs, and kept them.

Between the war and her final reunion, Ms. Previte had a three-decade career running the Camden County Youth Center, the county’s pretrial juvenile detention center, where troubled, often violent youths await court action on their cases.

In “Hungry Ghosts” (1994), a memoir about her experiences at the center, Ms. Previte wrote that she had been able to transform it from what she called a “snake pit” into a safe haven, where the youths could receive an education and improve their lives. The center became a national model for juvenile offenders.

In working with troubled youths, Ms. Previte often said, she drew on lessons she had learned in the Japanese camp, where her British teachers, who had also been interned, had made life tolerable for the children by creating a daily routine, insisting on good manners and mutual respect and teaching them that bad behavior had unwelcome consequences.

Granting children too much freedom, she believed, would lead only to disaster, while rules, expectations and encouragement were more likely to bring success.

In her late 60s, Ms. Previte ran as a Democrat for a seat in the New Jersey General Assembly and won. She served from 1998 to 2006, focusing on juvenile justice and family issues. In 1997, she became the first woman to become president of the New Jersey Juvenile Detention Association.

Mary Evelyn Taylor was born on Sept. 7, 1932, in Kaifeng, China, in the northern province of Henan, in the Yellow River Valley Her father, James Hudson Taylor II, was born in Glasgow, and her mother, Alice Elizabeth (Hayes) Taylor, was born in Pennsylvania. Both were Protestant missionaries. Mary was one of five children; two others had died in infancy. A great-grandfather, James Hudson Taylor, was a 19th-century British missionary noted for spreading Christianity in China’s interior.

While their parents were inland at a rural mission, Mary and three of her siblings studied at an English-language boarding school, Chefoo, in Yantai, a northern port city on the Yellow Sea. The youngest sibling remained with his parents.

On Dec. 8, 1941, the day after Japan bombed Pearl Harbor, Westerners in China were suddenly considered enemy aliens. Japanese soldiers went to the school and seized the 200 students and teachers and held them there for a year, until the captives were transferred to Weihsien.

“Separated from our parents, we found ourselves crammed into a world of gut-wrenching hunger, guard dogs, bayonet drills, prison numbers and badges, daily roll calls, bed bugs, flies and unspeakable sanitation,” Ms. Previte told ChinaDaily.com in 2014. Some inmates died of starvation and lack of medical care.

But Mary’s teachers from Chefoo proved to be godsends. They held classes every day and turned problems into games, like setting up competitions to see who could catch the most rats or kill the most bed bugs. The children were taught, like Girl Scouts, to sing and smile, do good deeds and maintain a positive outlook, despite the miserable circumstances.

After the camp was liberated, Mary and her siblings were flown by military transport to Xian, then traveled by oxcart and on foot to reunite with their parents in their rural mission.

Soon thereafter, the family moved to southern Michigan, where Mr. Taylor became pastor of the Spring Arbor Free Methodist Church. Mary attended what is now Spring Arbor University. She later transferred to Greenville College (now Greenville University) in Illinois, where she met her future husband, Ernest Leon Previte. They married in 1955 and eventually moved to New Jersey, where she received her master’s degree in education from Glassboro State College, now Rowan University.

Ms. Previte taught English at Camden High School, taking time off in 1962 for the birth of her daughter. She then served on various school boards.

In addition to her daughter, she is survived by her brothers, John Hayes Taylor and Herbert Hudson Taylor. Her marriage ended in divorce.

In a statement, Gov. Phil Murphy of New Jersey said her death “isn’t just a loss for New Jersey but for humanity.” He ordered all flags at state buildings to be flown at half-staff on Dec. 4, the date of her memorial service.

Prop 13 in California: Assessing the Pros and Cons

Klobuchar Ramped Up Prosecutions, Except in Cases Against Police

NewDay, one of Britain's biggest credit card issuers, is to take over Deko, a fast-growing player in retail finance, in the first major strategic...

Robert Pattinson: ‘I like perversity, I don’t care what people think’

What to Eat and Drink This Australian Summer