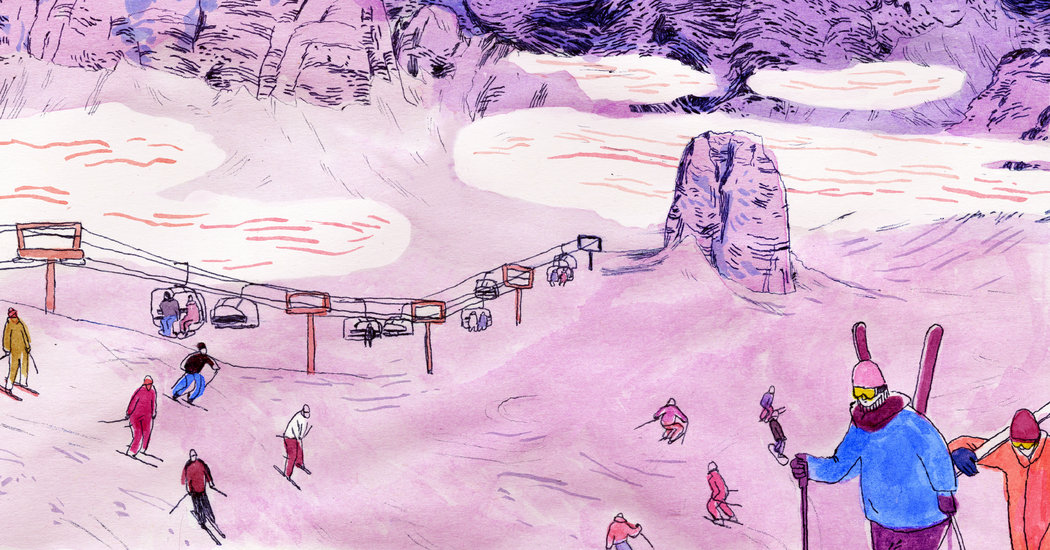 Downhill skiing is rarely cheap. The booking site Hipmunk found the median price for two people over two nights in a popular ski town like Vail, Colo., or Park City, Utah, with round-trip economy flights, runs about $1,700 to $2,200.

Going to smaller resorts is one reliable strategy for saving money. As is buying lift tickets in advance of your trip; according to Liftopia, which sells tickets for more than 200 ski areas, the average savings is 30 percent for tickets booked 11 days in advance. You may also save by skiing in January; Kayak found seven of 10 popular ski destinations in its searches had the lowest median round-trip airfares in January, including Bend, Ore., at $230, and Banff, Canada, at $298.

But to get nitty-gritty budget-saving tips, I turned to ski-town locals and winter fanatics, a.k.a. ski bums, to get their strategies.

“Living with your parents is one,” Bryant Dulin, 34, an avid skier and app developer based in Basalt, Colo., said. “Or knowing people at the tuning shops to redo the wax for a 12-pack of beer.” Bartering is common, he added. “A lot is done in exchange for beer.”

Hardcore ski devotees recommend moving to the mountains. “If you have to get a job, get a job on the mountain because you get a free pass,” R. Scott Rappold, 44, a freelance journalist based in Del Norte, Colo., said. He skied 101 days last winter.

Short of relocating, the following tips will help you save the ski-bum way.

A student and competitive snowboarder based in Aspen, Shane Serrano, 24, has to check a bag to bring his snowboard when traveling. But to make the most of it, he crams the gear bag with winter jackets and street clothes up to the weight limit.

Stay remote and use public transportation

Location is a main driver of hotel rates in ski resorts, with slope-side rooms at a premium. To save, commute. During President’s Week in February (this year, Feb. 16 to 23), one of the busiest weeks in ski areas, the Homewood Suites in Salt Lake City recently had rates on a room big enough for a family of four at $68 a night. Ski resorts in Park City are about 30 miles east.

“I always tell people to take the bus, it’s super cheap,” Nick Como, 40, a Park City resident, said. “You can stay outside of town and not slope-side and take a free bus.”

The Colorado Department of Transportation’s inter-regional express bus service, Bustang, connects Denver to mountain towns along the I-70 corridor, including Vail (fare $17) and Glenwood Springs ($28).

Based in San Francisco, Neil Bhatt, 30, a data scientist, visited Squaw Valley at Lake Tahoe, Calif., last winter 12 times. “My wife and I use the Sports Basement Ski Bus,” he wrote in an email. “For $75 round-trip per person, we’re able to make an easy day trip from San Francisco to Squaw. Breakfast and après drinks are provided.” (The fare is $80 this year.)

Once you’re in popular ski destinations such as Park City, Aspen and Vail, the local buses are free.

Rent gear away from the slopes

Renting gear from a ski resort is a convenience you generally pay for with higher rates. Ski shops in town usually offer bargains.

“If you’re coming from out of town, use the rental shops in Salt Lake City,” Mr. Como said. Basic gear, he added, is fine for beginners and progressing intermediates. “When my wife was learning, we got season rentals at just over $100 for the entire season,” he added.

There are also a growing number of ski rental gear shipping services that offer good rates; I priced a three-day ski rental package delivered to a hotel in early January in South Lake Tahoe, Calif., beginning at $39 a day with the online service Ski Butlers.com.

Do you really have seven hours of skiing in you? If not, consider a half-day lift ticket, which gives you three to four hours, usually in the afternoon, and costs less.

Fans of uphill skiing, also known as skinning, skip the lift lines and hike up a slope before skiing back down. In most ski areas, the practice is free, though some charge a nominal fee. Uphill skiers call it “earning your turns” and praise it as a cheap and intense workout (the skis and boots are different than standard downhill gear, however, so ask for that if you are renting).

“It doesn’t require the same amount of planning and avalanche awareness and route-planning as traditional backcountry skiing because it’s on the resort,” Caroline Tory, 29, of Aspen, said. She frequently skins up Aspen Mountain before going to work at a literary nonprofit.

On-mountain meals are notoriously expensive (the summer menu at Piste Mountain Bistro at Jackson Hole Mountain Resort had soup at $13). Bringing your own lunch is one of the easiest ways to trim expenses.

“We always bring pocket snacks,” Susan Medville, 46, a ski coach based in Pemberton, British Columbia, in Canada, said. She, her husband and 9-year-old son also bring pizza slices or peanut butter and jelly wraps that they eat on the Peak 2 Peak Gondola between Whistler and Blackcomb Mountains at Whistler Blackcomb ski area. “I either stuff my pockets like a squirrel or my husband carries a low-profile backpack. I’m O.K. with a smushed sandwich.”

When traveling, Mr. Serrano’s first stop is the local grocery store. “I make a point to try one restaurant wherever I’m visiting, but making your own dinners and packing your own lunch everyday saves a lot,” he said. He often pockets a turkey sandwich. “I was nicknamed Sandwich Bag for doing that,” he added.

B. Y. O. goes for drinks sometimes, too. “Flasks go a long way and can be filled with any cheap liquor to keep you warm,” Ben Moisen, 26, an avid skier and photographer and videographer for Powder Mountain in Eden, Utah, wrote in an email.

For winter apparel at discount prices, check online resellers like GearTrade or SidelineSwap. In ski towns, browse the resale shops. Places like affluent Aspen, for example, have secondhand shops like Replay Sports or Susie’s Limited Consignments that often deal in high-quality castoffs.

In Whistler, Ms. Medville shops at the Re-Use-It Center, where she found a Bogner ski jacket last year. She recommends it as a good place to buy ski poles, “because with ski poles, the condition doesn’t really matter,” she said.

Good morning. Tell me why, I don’t like Mondays, Bob Geldof wrote so many years ago, and the mournful sentiment echoes around the kombucha...

Senate rejects effort to subpoena documents from the Pentagon.