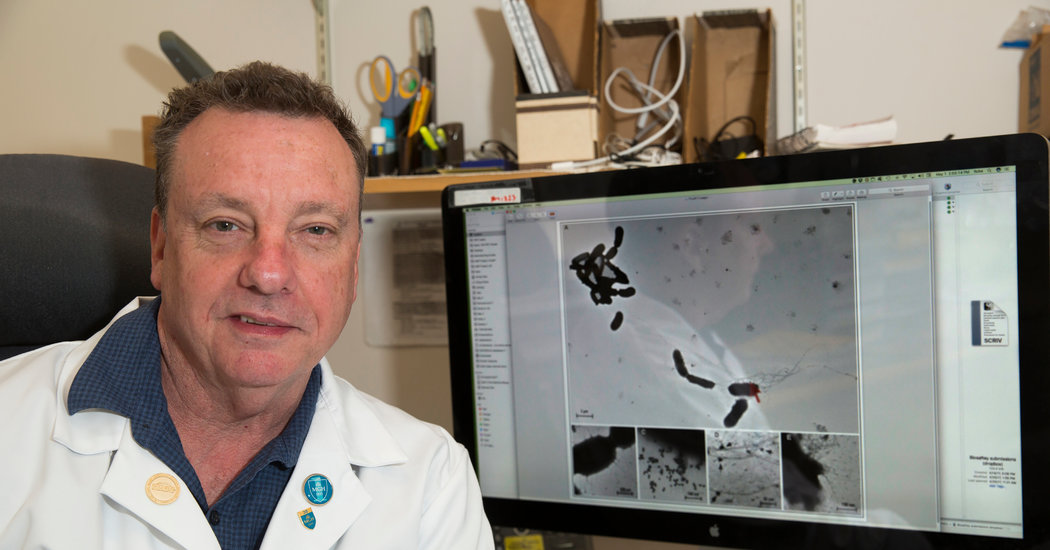 Robert D. Moir, a Harvard scientist whose radical theories of the brain plaques in Alzheimer’s defied conventional views of the disease, but whose research ultimately led to important proposals for how to treat it, died on Friday at a hospice in Milton, Mass. He was 58.

His wife, Julie Alperen, said the cause was glioblastoma, a type of brain cancer.

Dr. Moir, who grew up on a farm in Donnybrook, a small town in Western Australia, had a track record for confounding expectations. He did not learn to read or write until he was nearly 12; Ms. Alperen said he told her that the teacher at his one-room schoolhouse was “a demented nun.” Yet, she said, he also knew from age 7 that he wanted to be a scientist.

He succeeded in becoming a researcher who was modest and careful, said his Ph.D. adviser, Dr. Colin Masters, a neuropathologist at the University of Melbourne. So Dr. Masters was surprised when Dr. Moir began publishing papers proposing an iconoclastic rethinking of the pathology of Alzheimer’s disease.

Dr. Moir’s hypothesis “was and is a really novel and controversial idea that he alone developed,” Dr. Masters said. “I never expected this to come from this quiet achiever.”

Conventional wisdom held that beta amyloid accumulation was a central part of the disease, and that clearing the brain of beta amyloid would be a good thing for patients.

Dr. Moir proposed instead that beta amyloid is there for a reason: It is the way the brain defends itself against infections. Beta amyloid, he said, forms a sticky web that can trap microbes. The problem is that sometimes the brain goes overboard producing it, and when that happens the brain is damaged.

The implication is that treatments designed to clear the brain of amyloid could be detrimental. The goal would be to remove some of the sticky substance, but not all of it.

The idea, which Dr. Moir first proposed 12 years ago, was met with skepticism. But he kept at it, producing a string of papers with findings that supported the hypothesis. Increasingly, some of the doubters have been won over, said Rudolph Tanzi, a close friend and fellow Alzheimer’s researcher at Harvard.

Dr. Moir’s unconventional ideas made it difficult for him to get federal grants. Nearly every time he submitted a grant proposal to the National Institutes of Health, Dr. Tanzi said in a telephone interview, two out of three reviewers would be enthusiastic, while a third would simply not believe it. The proposal would not be funded.

But Dr. Moir took those rejections in stride.

“He’d make a joke about it,” Dr. Tanzi said. “He never got angry. I never saw Rob angry in my life. He’d say, ‘What do we have to do next?’ He was always upbeat, always optimistic.”

Dr. Moir was supported by the Cure Alzheimer’s Fund, and he eventually secured some N.I.H. grants.

Dr. Moir first came to the United States in 1994, when Dr. Tanzi was looking for an Alzheimer’s biochemist to work in his lab.

Working with Dr. Tanzi’s lab as a postdoctoral fellow and later as a faculty member with his own lab, Dr. Moir made a string of major discoveries about Alzheimer’s disease.

For example, Dr. Moir and Dr. Tanzi found that people naturally make antibodies to specific forms of amyloid. These antibodies protect the brain from Alzheimer’s but do not wipe out amyloid completely. The more antibodies a person makes, the greater the protection against Alzheimer’s.

That finding, Dr. Tanzi said, inspired the development of an experimental drug, made by Biogen, that the company says is helping to treat some people with Alzheimer’s disease. Biogen plans to file for approval from the Food and Drug Administration.

Robert David Moir was born on April 2, 1961, in Kojonup, Australia, to Mary and Terrence Moir, who were farmers.

He studied the biochemistry of Alzheimer’s disease at the University of Western Australia before joining Dr. Tanzi’s lab.

Once he learned to read, Ms. Alperen said, he never stopped — he read science fiction, the British magazine New Scientist and even PubMed, the federal database of scientific publications.

“Rob had an encyclopedic knowledge of the natural world,” she said.

He shared that love with his family, on frequent hikes and on trips with his young children to look for rocks, insects and fossils. He also played Australian rules football, which has elements of rugby as well as American football, and helped form the Boston Demons Australian Rules Football Team in 1997, his wife said.

In addition to his wife, with whom he lived in Sharon, Mass., Dr. Moir’s survivors include three children, Alexander, Maxwell and Holly Moir; a brother, Andrew; and a sister, Catherine Moir. His marriage to Elena Vaillancourt ended in divorce.

Hundreds Confined to Tenerife Hotel for 14 Days Over Coronavirus Fears

She Had Pain in Her Knee but No Obvious Injury. Why?

Coronavirus Nightmare Could Be the End for Europe’s Borderless Dream

This Year, Mercedes Cruised to the Top

The drivers Lewis Hamilton, Sebastian Vettel and Max Verstappen are stars of Formula One, but behind their success are teams that push, week in...