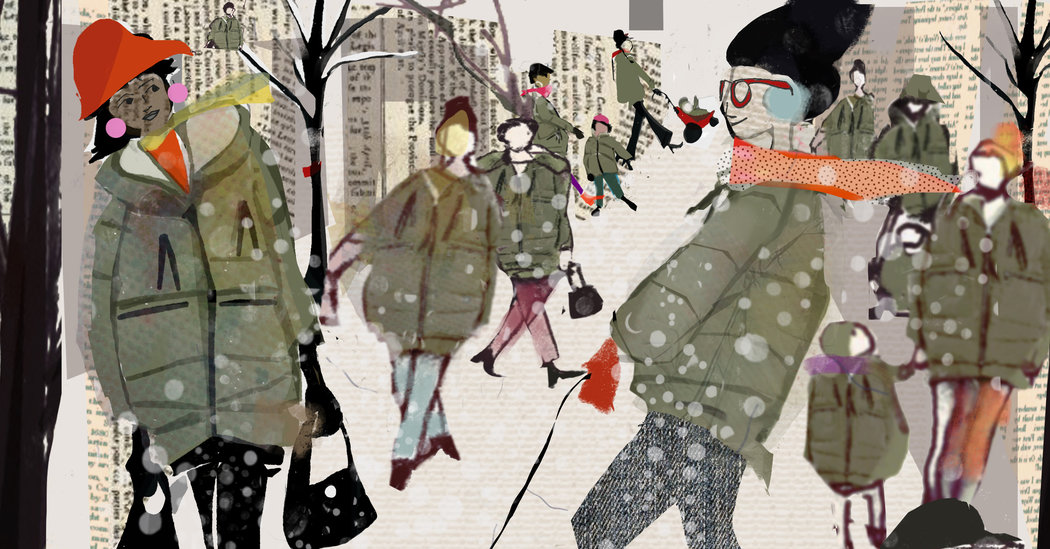 A few weeks ago, during another unseasonably warm fall day, my husband, in a pensive tone, posed a question: “Will it be embarrassing for you, to put your coat on again this year?”

This seemed like an odd query, but I understood immediately what he was saying because my winter coat has a capital “c” — it’s the Amazon Coat. Along with thousands of New Yorkers (or at least what feels like thousands), I bought a $100-ish puffy coat from Amazon last winter.

Boxy, wide, with an unholy assemblage of zippers and giant pockets, the coat was not particularly stylish, but it was not not stylish. It kind of confused my eyes to look at it.

Yet in a world where the other so-called viral winter parka sported a goose label and can cost more than $1,000, the Amazon Coat was, well, cheap. Remarkably cheap. One click away. By the time it arrived in my Twitter feed around early 2018, it was a quick jump to arriving in my apartment.

In 2019, though, the coat seemed smaller, sadder and definitely dirtier, slumped in the corner of my closet. What happens when the moment for such a specific product passes? Who will be wearing the coat for another year, and who will be sending it to the great clothing bin in the sky?

“I put it on the other day and felt really weird about it,” said Caroline Moss, a writer. “I just felt like I was putting on a meme that was done.”

“I’m so sad that I’m still wearing it,” said Emily Gould, a novelist in Brooklyn.

“I have worn my coat once,” said Lauren Posner, an Upper East Side resident who started an Instagram account for the Amazon Coat last year (@theamazoncoat, 3,579 followers) that recently became active again after a dormant summer. “I have definitely started seeing people wearing it, though not as many.”

“Mine is in semiretirement,” said Lauren Epstein, a photo editor and prop stylist who bought the coat in fall of 2017. “I wear it to the gym because I don’t mind it getting sweaty.”

Lauren Waterman, a writer, who bought the coat last winter, had a different kind of objection: The wide coat doesn’t pair well with this year’s straight and wide leg pants. “It’s a look for skinny jeans and leggings,” she said. “If you are wearing anything else, it’s a lot harder to sell.”

LIKE MANY VIRAL THINGS, the Amazon Coat had actually been circulating for years before much of the public noticed. It piqued the interest of the fashion press initially because it wasn’t made by a recognizable brand even though it was being worn by very fashionable women. Orolay, the Chinese manufacturer, was previously selling things like shoe racks on Amazon.

When The Strategist, the New York magazine shopping site, wrote about it in the spring of 2017, it had been prowling the streets of Upper Manhattan for most of that winter. Amy Larocca, an editor at New York, had spotted it on the Upper East Side, and the magazine tried to track down the patient zero of the coat.

It seems that a teacher at the 92nd Street Y had been a crucial influencer, and she had found it on a travel blog while planning for a trip to Iceland in 2016. Ana Maria Pimental, the Neiman Marcus fashion director, said she had heard rumors that a Korean blogger had worn it first, but no matter: What started uptown drifted downtown by the cooling temperatures of the fall of 2017.

More press followed: AOL opined about the quality of its duck filling; CNBC quoted experts who counseled that other coat makers shouldn’t panic — yet. The Orolay founder said that the company made more money in January 2019 than in all of 2017, and was expecting $30 to $40 million in revenue through 2019. (Over email, an Orolay spokesman wouldn’t provide sales figures to The New York Times but said that the founder’s estimate had ended up being accurate.)

Vox had a meta-story of all the stories, analyzing the coat’s appeal (“The Amazon coat, it should be noted, is not cool”) and determining that the snowballing trend pieces were, in part, attributable to the fact that many media companies now make money by linking to shopping sites like Amazon and getting a cut of whatever a reader ends up buying there.

This fall, the coat seems to be headed to even more mainstream acceptance: Oprah put the coat in her list of favorite things. Amazon has begun mailing out its printed holiday catalog, featuring, of course, the coat. Michele Steele, an ESPN reporter recently went on television in an olive-colored iteration.

Fashion sites have noted the emergence of a new color for 2019 (red) and a much enhanced array of different styles of Orolay coats, including a style for men and a new children’s version. As Vox had speculated, almost every mention of the coat in the press came with links to buy it.

SO, WHY ALL THE FUSS about this piece of clothing? Fashion trends are obviously happening around us all the time, and things had gone viral long before Instagram. But there were a few unique things about the Amazon Coat.

First, it was not made by a brand with any name recognition: These are not Birkenstocks coming back, or even Hush Puppies, the 1950s-era shoes profiled by Malcolm Gladwell in “The Tipping Point” after they had a moment in the mid-’90s.

Then there’s the fact that the coat was not available in any store. You could buy it only on Amazon, which meant that you could only buy the coat without trying it on — not a typical feature of winter coat purchases.

In other ways, the Amazon Coat viral spread, especially in New York, is an old-fashioned affair. Over and over, when I asked people why they bought their parkas, it came down to word of mouth: Someone they knew, or followed closely on social media, had sung its praises.

Ms. Moss bought the coat after a friend, Aminatou Sow, the co-host of the “Call Your Girlfriend” podcast, showed it to her; Ms. Gould and I bought the coat after Ms. Moss tweeted about it. A collection of my cousins, visiting from Turkey, ordered the coat after I showed off all the zippers. Ms. Posner is trying to get her husband to buy the men’s version. Influencing is an ancient art.

When I first started wearing the coat, I expected to feel both warm and smug; what I did not expect was the emotional journey the coat took me on. It was common for strangers to stop me on the street, asking if this was “the coat”; for yoga teachers to grin and note how many coats they had seen that morning. It was ridiculous, but I loved the feeling of belonging to some kind of discount-shopper cult. I would smile at fellow coat wearers on the subway, secure in our knowledge that our coat was not available in any store.

Then, around February, something turned. A couple of street sightings turned into a dozen, or more. I couldn’t ignore the demographics of most of the coats I saw on the streets: women wearing athleisure, holding compostable Sweetgreen bowls or pushing strollers that cost as much as six or seven of their parkas.

I barely even knew anyone living on the Upper East Side and yet, somehow, I had joined their ranks. Any claim to a unique personal taste or style was belied by the zippered beast on my back.

Now that temperatures have begun dropping, the coat has re-emerged on city streets. (I counted five on my way from Brooklyn to Manhattan last week.) Ms. Moss, who is moving to Southern California, will be keeping hers until she hits Los Angeles at the end of January. Ms. Gould has bought a Patagonia coat that will likely phase the Amazon Coat out of rotation.

It’s not clear yet whether there will be a new contender to the Amazon Coat this winter. Everlane makes reasonably priced puffers that have been spotted; Uniqlo has down jackets that can be on sale for about $60. If you want the style of the Amazon Coat but are worried you aren’t paying enough … well, there are this season’s $850 look-alikes.

For all of my agita, I have not bothered to buy another parka. I don’t know if I’m embarrassed, exactly, to be wearing the viral coat again, but trying to figure out which of the thousands of pockets has my keys has not sparked joy this season. Even for the die-hard Amazon Coat fans — people like Ms. Posner who were driven to catalog its spread — a third winter seems out of the question.

“No,” Ms. Posner said when I asked her if she imagined wearing her coat or operating her Instagram fan account next fall.

It turns out that she was not chronicling the coat just for fun. A former publicist and marketing professional, she had taken some time off work to help raise her young children but is now planning to re-enter the work force.

“This,” she said, referring to her Instagram account, “was an interesting little experiment in whether I could be relevant in marketing. This is my résumé.”

Of course, in New York, a viral coat is also a résumé.

A Coffee C.E.O.’s Pandemic Diary: ‘We Want to Still Provide an Escape’

Spending and Scottish independence to be day two’s battlegrounds

Tom Watson's bombshell resignation has sent shock waves through the general election campaign as party leaders embark on day two of the battle for...

Trump: ‘Corbyn would be so bad for your country’

On Politics: A Big Day in Michigan

Cage spends New Year’s Eve in a small pub – and...