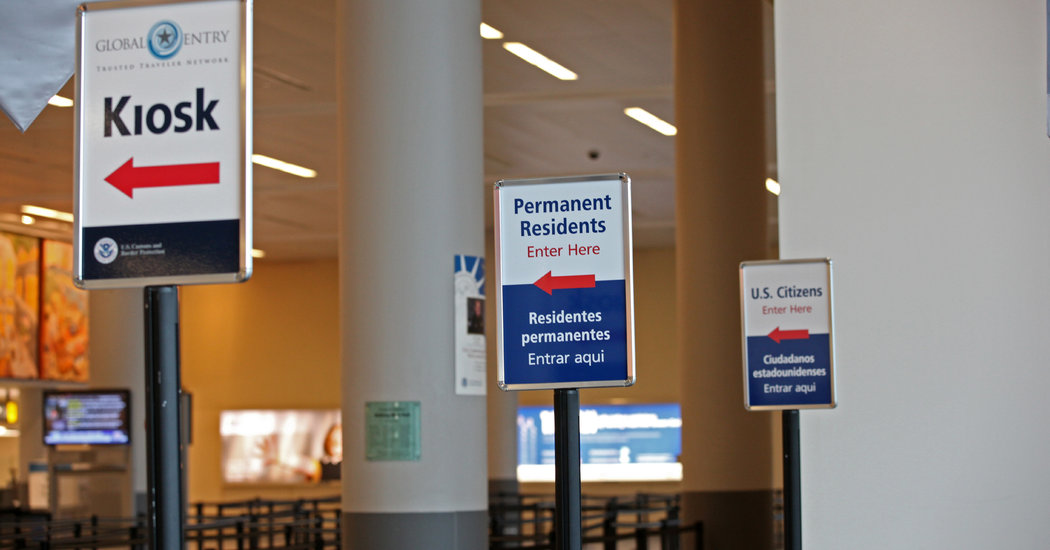 WASHINGTON — The Department of Homeland Security temporarily barred New Yorkers on Wednesday from enrolling in Global Entry and similar programs that allow travelers to speed through borders and airport lines, escalating a conflict between the Trump administration and the state over a law that allows undocumented immigrants to obtain driver’s licenses.

Chad Wolf, the acting secretary of homeland security, said in a letter to the New York State government that residents would no longer be able to apply for such programs because of the so-called Green Light Law. That measure prevents agencies like Immigration and Customs Enforcement, which arrests and deports undocumented immigrants, as well as Customs and Border Protection from gaining access to the state’s Department of Motor Vehicles databases without a court order.

Mr. Wolf said that access was needed to thoroughly vet applicants for the programs.

“Although D.H.S. would prefer to continue our longstanding cooperative relationship with New York on a variety of these critical homeland security initiatives,” he wrote in the letter, “this act and the corresponding lack of security cooperation from the New York D.M.V. requires D.H.S. to take immediate action to ensure D.H.S.’s efforts to protect the homeland are not compromised.”

The Trump administration has long taken aim at the state and, more specifically, New York City for “sanctuary city” policies that limit cooperation with ICE. But Mr. Wolf’s decision to suspend enrollment for the programs turned what had most recently been a public relations campaign against local politicians into a punitive policy affecting possibly millions of New Yorkers.

New Yorkers will not be able to enroll in “Trusted Traveler Programs,” which allow people to cut through long lines at airports if they pass a pre-clearance with the Department of Homeland Security. Participants are granted expedited processing after international travel through the Global Entry program; from Canada through the NEXUS program; and from Canada and Mexico through the SENTRI program.

The Green Light Law was passed last year by New York’s Democratic Legislature and was signed by Mr. Cuomo, a third-term Democrat and frequent antagonist of President Trump. Under the new law, county and state motor vehicles departments could accept applications for licenses, regardless of immigration status.

It provoked a sharp backlash in some moderate suburban communities as well as in some more conservative areas upstate. Several county officials refused to comply or sued to stop the law, though it proved popular in liberal enclaves like New York City.

During negotiations over the bill, which passed by a slim majority in the State Senate, Mr. Cuomo had expressed concerns over federal immigration officials gaining access to D.M.V. records, something that the bill broadly forbade, without a court order.

“They’re using that personal data that they get from that database to look up an individual’s date of birth, their photo. They’re using that as they build that case,” Mr. Wolf told the Fox News anchor Tucker Carlson on Wednesday night as he announced the action. “They can no longer do that because of what New York did.”

But the state’s attorney general, Letitia James, supported the bill’s passage, saying it was constitutional and contained “ample protections for those who apply for driver’s licenses.” She promised to defend it if it were challenged.

Activists and immigrants also celebrated the bill, contending that the ability to obtain a driver’s license was crucial to surviving. Many lined up outside D.M.V. offices after the legislation took effect in December.

Mr. Wolf said that the action was the result of “an initial assessment” and that the department would review its response going forward.

The administration has also taken aim against New York City leaders, mainly Mayor Bill de Blasio, for not allowing ICE agents to detain undocumented immigrants already in the custody of the New York Police Department. It was one of the cities that the attorney general at the time, Jeff Sessions, threatened in 2017 to revoke law enforcement funding from as retaliation for not cooperating with ICE on deportations.

ICE intensified that feud in recent weeks when the agency issued four subpoenas to the city for information about inmates wanted for deportation.

Mr. Trump dedicated a portion of his State of the Union address on Tuesday to the matter, claiming the death and rape of a 92-year-old woman could have been prevented if city authorities had held the man accused in her killing for potential deportation.

Since the early days of his 2016 campaign, the president has highlighted stories of Americans killed by undocumented immigrants. Stephen Miller, his adviser and a prominent strategist of Mr. Trump’s immigration agenda, has also in the past directed homeland security officials to spotlight crimes committed by undocumented immigrants as a way to gain support for his more restrictionist policies.

“Tragically, there are many cities in America where radical politicians have chosen to provide sanctuary for these criminal illegal aliens,” Mr. Trump said Tuesday night.

But multiple studies have debunked the theory that sanctuary city policies drive crime.

The AA, Britain's biggest motoring organisation, has kicked off a search for a new chairman two years after the incumbent's predecessor was sacked over...

For Speed, Chicago’s Marathon Is Second to None

Why Impeachment Isn’t a Big Deal on the Trail