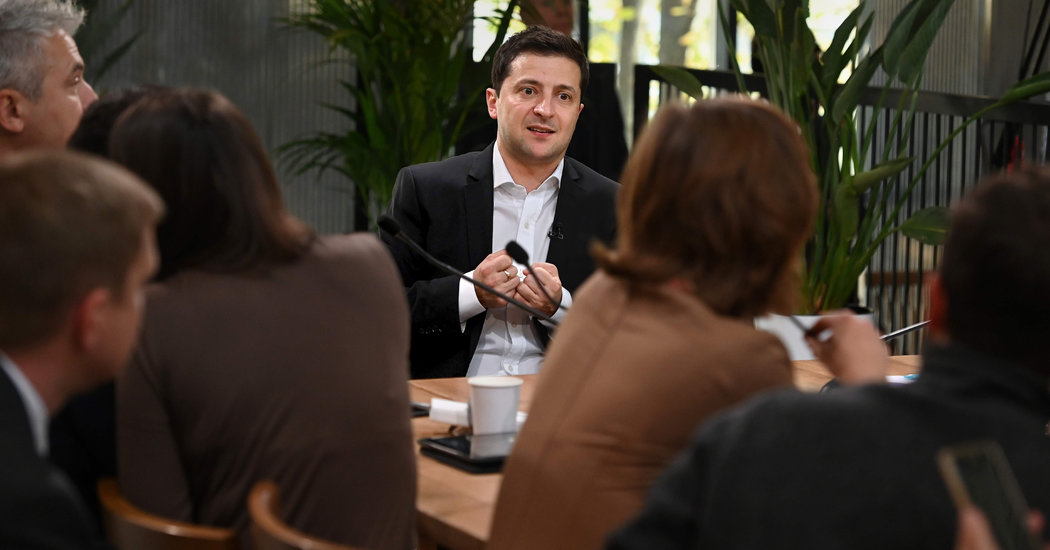 KIEV, Ukraine — It was early September, and Ukraine’s new president, Volodymyr Zelensky, faced an agonizing choice: whether to capitulate to President Trump’s demands to publicly announce investigations against his political enemies or to refuse, and lose desperately needed military aid.

Only Mr. Trump could unlock the aid, he had been told by two United States senators, and time was running out. If the money, nearly $400 million, were not unblocked by the end of the fiscal year on Sept. 30, it could be lost in its entirety.

In a flurry of WhatsApp messages and meetings in Ukraine’s capital, Kiev, over several days, senior aides debated the point. Avoiding partisan politics in the United States had always been the first rule of Ukrainian foreign policy, but the military aid was vital to the war against Russian-backed separatist forces in eastern Ukraine, a conflict that has cost 13,000 lives since it began in 2014.

By then, however, Mr. Zelensky’s staffers were already conceding to what seemed to be the inevitable, and making plans for a public announcement about the investigations. It was a fateful decision for a fledgling president elected on an anticorruption platform that included putting an end to politically motivated investigations.

Elements of this internal Ukrainian debate have appeared in the Ukrainian news media and seeped into congressional testimony in the United States, as part of an impeachment inquiry undertaken after accusations surfaced of Mr. Trump’s demands.

But interviews in Kiev with government officials, lawmakers and others close to the Zelensky government have revealed new details of how high-level Ukrainian officials ultimately decided to acquiesce to President Trump’s request — and, by a stroke of luck, never had to follow through.

Aides were arguing in favor of “bowing to what was demanded,” said Petro Burkovskiy, a senior fellow at the Democratic Initiatives Foundation who has close ties to the Ukrainian government. They were willing to do so, he said, despite the risk of losing bipartisan support in the United States by appearing to assist Mr. Trump’s re-election bid. “The cost was high.”

As President Trump’s principal envoy to Ukraine, Gordon Sondland, admitted Tuesday in congressional testimony, the Trump administration had withheld the military aid to pressure Mr. Zelensky to make a public statement on the two investigations: one into whether former Vice President Joseph R. Biden Jr. had pressed for the firing of a Ukrainian prosecutor who was investigating Burisma, a natural gas company where his son served on the board; the other into unproven accusations that it was Ukraine, not Russia, that meddled in the 2016 election to promote the candidacy of Hillary Clinton.

In the July 25 phone call that provoked a whistle-blower complaint and touched off the impeachment inquiry, Mr. Zelensky offered private assurances that his government would look into those matters.

But a public statement that raised doubts about Russian meddling and Mr. Biden, whom the president regarded as the greatest threat to his re-election, would be far more useful politically to Mr. Trump. Not only would it smear Mr. Biden, it could also appear to undermine the Mueller investigation into Russian electoral interference by pinning some blame on Ukraine.

A tug-of-war ensued between a senior aide to Mr. Zelensky, Andriy Yermak, and another of Mr. Trump’s envoys to Ukraine, Kurt Volker, over the wording of the proposed public statement. Mr. Volker went so far as to draft a statement for Mr. Zelensky that mentioned both investigations.

Mr. Yermak pushed back, suggesting language that mentioned investigations but in general terms, so as not to antagonize the Democrats. Late in the negotiations, the American diplomats consented to dropping mention of Ukrainian interference in the 2016 election.

Even as Mr. Yermak negotiated the wording in August, the stakes were clear. While rumors had been swirling for months about a possible hold on military aid, by early August high-level Ukrainian officials had confirmed the freeze.

The trade soon became explicit. They were approached in September by Mr. Sondland, a major donor to Mr. Trump’s inauguration who had been appointed ambassador to the European Union despite having no diplomatic experience. At that point, he explained in blunt terms to Mr. Zelensky and Mr. Yermak, there was little chance the aid would be forthcoming until they made the public statement on the investigations.

“I said that resumption of the U.S. aid would likely not occur until Ukraine provided the public anticorruption statement that we had been discussing for many weeks,” Mr. Sondland said in sworn testimony released Tuesday by the House committees leading the impeachment inquiry.

But aides to Mr. Zelensky, on high alert to avoid any move that might irritate Mr. Trump, wondered if that was such a good idea, in that Mr. Trump habitually called CNN “fake news” in his Twitter posts.

They also uncovered a post from Mr. Trump attacking Fox News as “not working for us anymore!”

Nearly all Mr. Zelensky’s top advisers favored his making the public statement, said one of the officials who participated in the debate. United States military aid, they agreed, as well as diplomatic backing for impending peace talks to end the war outweighed the risks of appearing to take sides in American politics.

There was a lone holdout — Alexander Danyliuk, the director of the national security council. Mr. Danyliuk, who resigned in late September, told the Ukrainian news media that the Zelensky administration would now need to “correct the mistakes” in relations with the United States and “in particular their own.”

Finally bending to the White House request, Mr. Zelensky’s staff planned for him to make an announcement in an interview on Sept. 13 with Fareed Zakaria, the host of a weekly news show on CNN.

Though plans were in motion to give the White House the public statement it had sought, events in Washington saved the Ukrainian government from any final decision and eliminated the need to make the statement.

Word of the freeze in military aid had leaked out, and Congress was in an uproar. Two days before the scheduled interview, the Trump administration released the assistance and Mr. Zelensky’s office quickly canceled the interview.

Since then, Trump administration officials including the White House chief of staff, Mick Mulvaney, have tried to argue that the security assistance could not have been conditioned on the public statement, because the aid was released without it.

That stance has crumbled as a succession of United States diplomats, capped by Mr. Sondland on Tuesday, have testified in the impeachment inquiry that the freeze on aid was part of a quid pro quo designed to coerce Mr. Zelensky into making the public statement.

In Kiev, there is still a debate about whether Mr. Zelensky caved or held out. “The Zelensky team was ready to make this quid quo pro,” said Mr. Burkovskiy, the analyst. “They were ready to do this.”

But Pavlo Klimkin, Ukraine’s foreign minister until a change of government on Aug. 29, said there was no telling what Mr. Zelensky would have ended up saying in the interview, as there were so many versions of a statement under negotiation.

“From the contacts that took place, it’s difficult to say if they led, or did not lead, to concrete deals,” Mr. Klimkin said in an interview. In public, Mr. Zelensky has insisted he would never order a politicized prosecution.

Either way, Mr. Klimkin said, Ukrainian officials were at the least keenly aware of the stakes — a trade of United States assistance for political favors, even as Mr. Trump’s supporters have insisted they should not have viewed relations in this light.

“We are not idiots, or at least not all of us,” Mr. Klimkin said.

‘Democracy Is in Play’: What to Know About Protests in the Dominican Republic

Courtney Love has shared an emotional post on Instagram recalling her wedding to Kurt Cobain 28 years ago, describing the late Nirvana frontman as...

Steeped in Astros’ and Yankees’ Ways, Joe Espada Is a Hot...

As Weinstein’s Trial Begins, His Accusers Call Out Bad Men For...