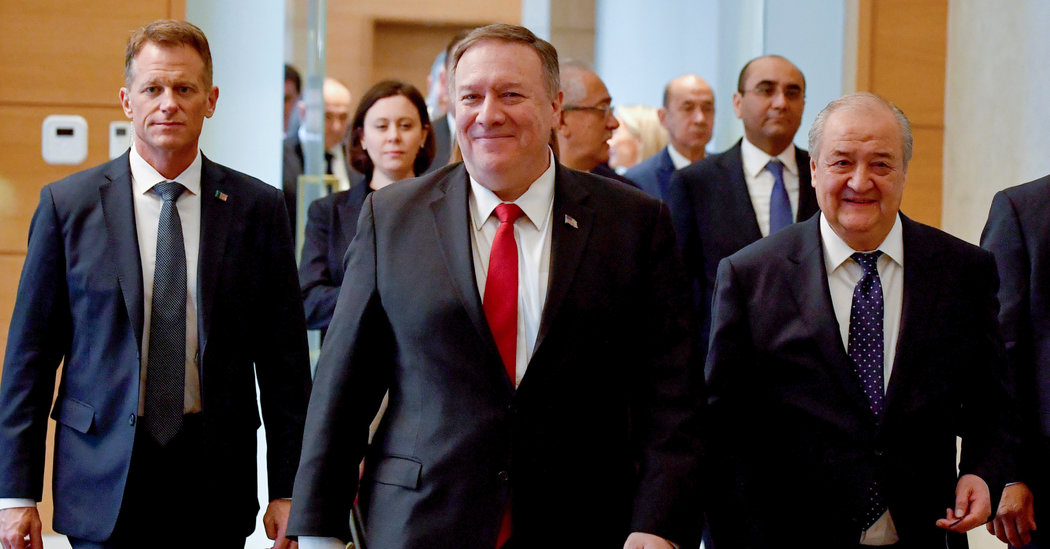 TASHKENT, Uzbekistan — Secretary of State Mike Pompeo said Monday that the Trump administration was moving ahead with peace talks with the Taliban to end the war in Afghanistan. But to reach a deal, he said, the Taliban must first give “demonstrable evidence of their will and capacity to reduce violence.”

Mr. Pompeo made his remarks in Tashkent, the capital of Uzbekistan, where he met with Uzbek leaders who have helped to seek peace in Afghanistan, a bordering nation, and with foreign ministers from four other Central Asian countries. His comments underscored the difficulty that American officials have faced in trying to reach a reduction in conflict in Afghanistan that would allow President Trump to withdraw some or most of the roughly 13,000 troops there.

Mr. Trump called off peace talks with the Taliban last September, but negotiations have restarted since then. Zalmay Khalilzad, the special representative for Afghanistan, arrived in Kabul, the country’s capital, on Saturday to talk with leaders there. He told President Ashraf Ghani that there has been no significant progress in peace talks, according to a statement issued by Mr. Ghani’s office.

On Monday, at a news conference following a meeting between Mr. Pompeo and Abdulaziz Kamilov, the foreign minister of Uzbekistan, Mr. Pompeo was asked whether peace was possible, given Mr. Khalilzad’s remarks to Mr. Ghani on a lack of progress.

Mr. Pompeo said the work on the plan amounted to “putting the commas in the right place, getting the sentences right,” though he did not go into details.

“We got close once before to having an agreement, a piece of paper that we mutually executed, and the Taliban weren’t able to demonstrate either their will or their capacity, or both, to deliver on a reduction in violence,” he said. “And so what we are demanding now is demonstrable evidence of their will and capacity to reduce violence, to take down the threat.”

The power-sharing talks and other negotiations that the United States wants the Afghan government and Taliban to hold with each other as a next step should take place in “a less violent context,” he said.

The Taliban have intensified attacks, presumably with the idea that it would give them an advantage in the current talks. In early September, the Taliban took credit for a suicide bombing in traffic in Kabul that killed Sgt. First Class Elis A. Barreto Ortiz, who was part of a driving team for covert special operations officers.

But that killing prompted Mr. Trump to set aside an emerging agreement and call off secret talks he had planned to have with the Taliban at Camp David, the presidential retreat.

Mr. Trump has denounced what he calls the endless wars that the United States started after the attacks of Sept. 11, 2001. Yet he has failed to conclude the talks with the Taliban and has actually increased significant forms of military action in Afghanistan. The United States carried out airstrikes there at a greater pace in the last two years than during any other years of the war, which began in 2001.

Mr. Pompeo said Monday that Washington, as part of the negotiations, still aimed “to deliver a counterterrorism profile that not only protects America but nations in this region as well.”

Mr. Kamilov said the peace process would take “a very long time,” but there was “no other alternative.”

“We do not have some illusions that it will be possible to solve the Afghan problem with one push just by signing an agreement,” he said.

In another meeting, Mr. Pompeo also thanked President Shavkat Mirziyoyev of Uzbekistan for “forging a closer, strategic partnership” with Washington in trying to advance the Afghanistan peace talks.

Mr. Pompeo flew out of Tashkent on Monday night. His stop in Uzbekistan was the final one of a five-nation tour in which a common theme was getting nations to support American policy aimed at counterbalancing Russia and China. Some senior Trump administration officials view the two powers as the most prominent challengers to American global influence and military and economic might. In London last Thursday, Mr. Pompeo said the Chinese Communist Party was the “central threat of our times.”

On Friday, Mr. Pompeo met in Kyiv, Ukraine, with President Volodymyr Zelensky, where he said the United States was committed to supporting Ukraine in its defense against aggression by Russia. It was the first meeting between a Trump cabinet official and Mr. Zelensky since the impeachment inquiry began in September, centering on charges that Mr. Trump pressured the Ukrainian leader for personal favors by delaying military aid.

Coronavirus Models Offer the Big Picture, Not the Details of What May Come

2 Killed in Knife Attack in French Town Under Lockdown

Pier 1 Imports, the home goods retailer that in the 1990s became a popular destination for exotic rattan chairs and cheap embroidered pillows only...

Pioneers of Women’s Tennis Make Gains in Pursuit of Recognition

Are the Lib Dems the only party of sound finance?