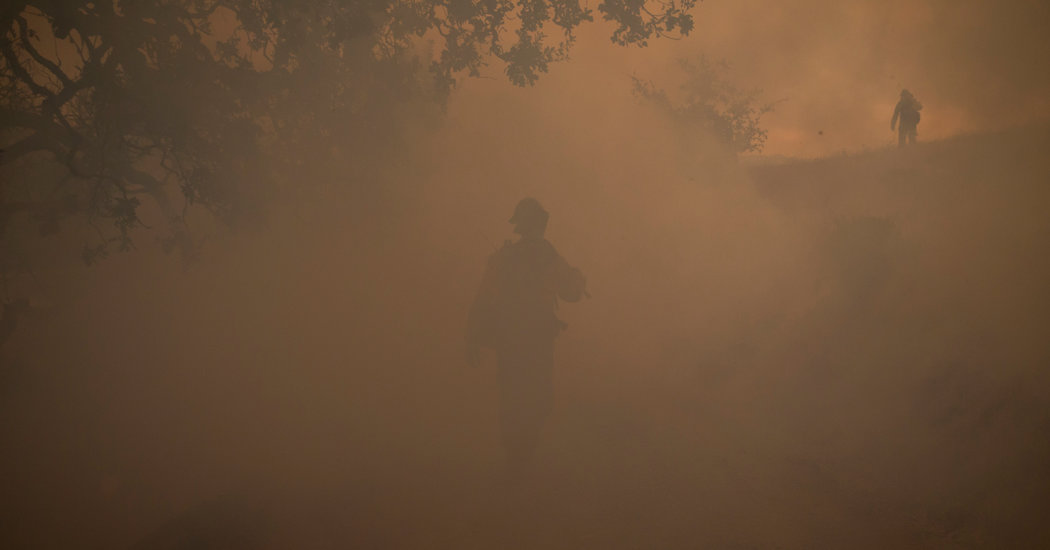 The fires that raged in California over the past two weeks consumed thousands of acres and drove residents up and down the state to flee their homes.

The Kincade and Getty fires, both of which were mostly contained by Monday, captured the headlines. But violent winds ignited multiple fires — at one point 16 were burning — and drew the attention of President Trump, who approved federal relief funds for California before using Twitter to blast the state’s readiness for confronting fires. Planned blackouts also kept many Californians without power for days.

California is only midway through its fire season, which traditionally occurs in autumn but has lately extended into summer and winter. But now that the fires have died down for the moment, here is what we have learned.

Fire season has been far less destructive and deadly.

If you only saw the television images and photographs of the fires, you might think California was facing an unprecedented crisis. You would be wrong.

The fires so far have been remarkably less destructive and deadly compared with the last two years, despite winds that were the strongest in a decade . In 2017 and 2018, California experienced the largest, most destructive and deadliest blazes recorded in the state’s long history of wildfires.

When last week began, fires had burned about 75,000 acres in areas under the jurisdiction of Cal Fire, the state’s firefighting agency.

Fire departments have been quicker to order evacuations, and they put more fire crews and aircraft on standby. And some of the fires have burned in areas that have seen blazes in recent years, leaving them without a lot of new fuel — chaparral and shrubs — to burn, said Capt. Tony Imbrenda, a spokesman for the Los Angeles County Fire Department.

Captain Imbrenda cautioned that the fire season is long and could become more deadly.

“We don’t want people to be lulled into a sense of complacency that we have some ability this year that we didn’t last year,” he said. “That’s not the case.”

So it was no surprise that PG&E, already in bankruptcy after amassing tens of billions of dollars in wildfire liability because its equipment caused two dozen blazes in recent years, turned off its customers’ electricity as wind gusts as high as 102 miles per hour blew through Northern California. What was unexpected was how many people the utility blacked out.

Never before in California history had a utility deliberately cut power to as many as three million people, which PG&E did Oct. 26 in an attempt to prevent wildfires. It was the second mass blackout in two weeks, angering the governor, lawmakers and residents who were left groping in the dark — many for almost a week.

Despite PG&E’s widespread blackout strategy, it appears that it did not completely prevent the utility’s equipment from sparking wildfires. The power company’s lines, poles and transformers are suspected of causing up to five wildfires, including the large Kincade fire that ripped through Wine Country.

“We are coming off what was a historic event,” Andrew Vesey, PG&E’s chief executive for utility operations, said during one of the daily briefings about the intentional blackouts. “The reason we do this, as we’ve said many times, is for public safety. We continue to believe it’s the right thing to do.”

The San Diego utility, which pioneered the idea of using blackouts as a fire prevention measure, took a more surgical approach, turning off power to a small fraction of the customers that PG&E did. Edison also limited its intentional blackouts, though its equipment also is suspected as the cause of at least two Southern California fires.

California vs. Trump round … who’s counting?

The governor of California, Gavin Newsom, has been a steadfast critic of President Trump and rarely misses an opportunity to joust with the White House on everything from climate change to gun control to immigration.

But as the wildfires burned, Mr. Newsom praised the Trump administration for making federal funds available to fight several fires, including the Getty, Tick, Kincade and Easy fires.

“His team is performing above and beyond expectation,” Mr. Newsom said last week, according to Politico. “Every single request we’ve had to the administration has been met.”

And on Twitter, where Mr. Newsom often attacks the administration, he wrote, “Thank you, @realDonaldTrump.”

“You kind of just felt like hell had frozen over,” Bill Whalen, a former adviser to Pete Wilson, a former Republican governor of California, said about the tweet.

It lasted all of a few days, underscoring that no disaster, however large, is enough to bridge the gaps between California and the White House.

President Trump on Sunday renewed his Twitter attacks on California and Mr. Newsom, saying he has “done a terrible job of forest management.”

“Every year, as the fire’s rage & California burns, it is the same thing — and then he comes to the Federal Government for $$$ help,” Mr. Trump wrote.

Mr. Newsom responded by writing: “You don’t believe in climate change. You are excused from this conversation.”

The wildfires and blackouts have been the first major crisis confronted by Mr. Newsom. And even frequent critics, like Mr. Whalen, have given him high marks.

“The first thing that any politician in California has to realize is that there are two sets of people you have to gravitate to,” said Mr. Whalen, who is a fellow at the Hoover Institution at Stanford. “One is the first responders, the other is the victims. And it seems to me he has done a pretty good job of doing both.”

Climate change is a key to understanding the fires.

Even though California is no longer in a drought, dry vegetation remains a top concern for firefighters and climate scientists.

That is in part because a warming atmosphere means potential fuels are drying out more than they would have a century ago, said A. Park Williams, an assistant research professor at Lamont-Doherty Earth Observatory at Columbia University.

The cause and effect is quite straightforward: Drier plants catch fire more easily, allowing fires to grow bigger and faster.

But climate change is one of many factors contributing to fire danger. The Santa Ana winds have been a phenomenon for thousands of years. Those regular wind events can lead to crisis when they intersect with the drier landscape and man-made triggers like the state’s failing private power infrastructure.

“California is about 3 degrees Fahrenheit warmer today than it would be without climate change,” Dr. Williams said. “And so everything is occurring against that warmer backdrop.”

A past fire loomed large in this year’s evacuations.

The devastating Tubbs fire in 2017 was on the minds of emergency response teams as the Kincade fire began to spread the night of Oct. 23, said Mark Essick, who was sworn in as Sonoma County’s sheriff in January.

When the Tubbs fire began, county officials decided not to send an alert because they wanted to avoid causing panic and traffic jams. But as a result, many people learned there was a fire in the region when they awoke with their homes in flames. In the aftermath of the fire, which killed 22 people, constituents and political leaders criticized emergency responders for failing to quickly send wireless alerts.

This time was different.

With extensive input from Cal Fire’s incident response team, Sheriff Essick made the decision to order the evacuation of nearly 200,000 people in the path of the Kincade fire.

“I took the seriousness of their tone, combined with my experience from the Tubbs fire,” he said, “and I thought that I just could not live with myself if I did not thoroughly inform them quickly about what was happening.”

The alert protocol has been overhauled since the Tubbs fire, Sheriff Essick said, and the sheriff’s department now has direct access to it. Over the course of the fire, 15 notifications were sent over the wireless alert system, in coordination with the county’s emergency manager.

Sheriff Essick added that the Tubbs fire spread far more rapidly than the Kincade fire, meaning it is not an even comparison.

“In 2017, that fire raced across a few miles in less than a few hours, in the middle of the night, when people were asleep. It caught a lot of people off guard,” he said. This year, “we had time on our side.”

These Creams Will Make Your Dry Skin Forget About Winter

Even if the last months have been comparatively mild in New York, winter still brings the inevitable — and inevitably rough — red and...

Jennifer Aniston ‘working on something’ with Friends co-stars