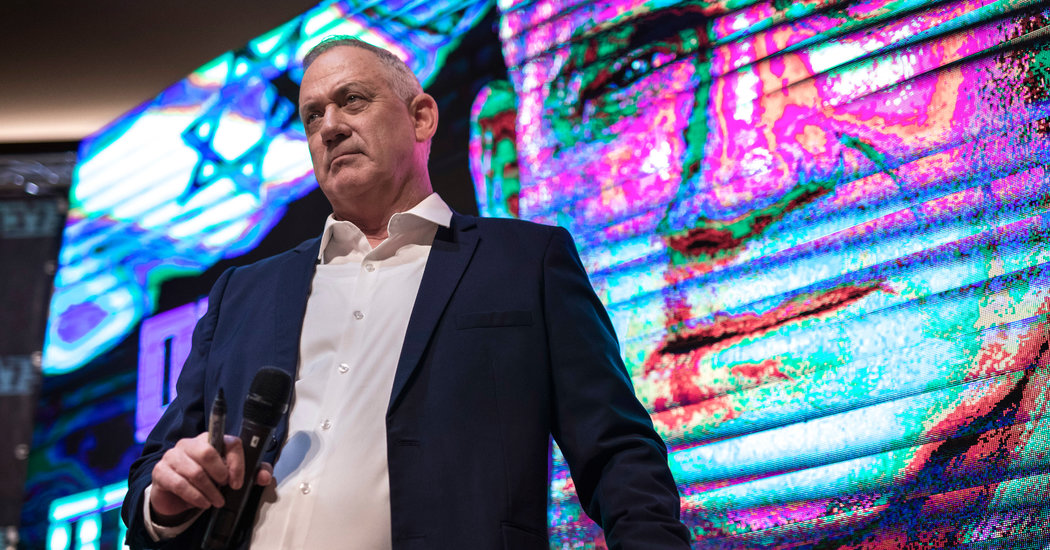 JERUSALEM — Prime Minister Benjamin Netanyahu of Israel was set to hold onto power after his chief rival, Benny Gantz, reversed himself Thursday and signaled that he would be open to serving in a Netanyahu-led government.

Mr. Gantz, a former Israeli army chief who had vowed to bring Mr. Netanyahu’s long rule to an end and fought him to a draw in three elections, said he was changing course to help bring the country together to fight the coronavirus pandemic.

“These are unusual times and they call for unusual decisions,” Mr. Gantz said in a speech to Parliament on Thursday.

The move was a 180-degree reversal for Mr. Gantz and broke countless campaign promises. Mr. Netanyahu has been indicted on criminal corruption charges and Mr. Gantz had vowed not to serve in a government led by a prime minister under indictment.

For Mr. Netanyahu, the country’s longest-serving prime minister, it was only the freshest evidence of why many Israelis consider him a political genius who, despite the obstacles, can never be counted out.

By turns ridiculing Mr. Gantz and appealing to his statesmanlike instincts, questioning his mental health and badgering him to prove his patriotism, Mr. Netanyahu appeared to have co-opted Mr. Gantz into delivering him a record fourth straight term.

Mr. Gantz said that he would “explore the formation of a national emergency government” because of the coronavirus, which has claimed eight lives in Israel, infected thousands and devastated the country’s economy.

His decision immediately led to the breakup of his centrist Blue and White party.

Some analysts said that he may also have doomed his own political future as a credible alternative to Mr. Netanyahu, but others said a unity government would offer Mr. Gantz his best chance at taking over as prime minister at some point in the future.

The shape of a new government and Mr. Gantz’s role in it were not immediately clear on Thursday. In an interim move, Mr. Gantz nominated himself for the position of Parliament speaker — acquiescing to a demand by Mr. Netanyahu not to put forward an ally whom Mr. Netanyahu found objectionable — and was voted into that position on Thursday evening.

Mr. Netanyahu had been urging Mr. Gantz to join forces with him to fight the coronavirus crisis after the most recent election, on March 2, left neither of them in a position to form a majority government.

Thursday’s dizzying turn of events was the latest twist in a political and constitutional crisis that has played out in the shadow of the epidemic.

With Israel divided between center-left voters desperate for Mr. Netanyahu to leave the stage and those on the right who cannot imagine another leader, the country has been deadlocked for more than a year, unable to enact budgets or make pressing decisions until it can resolve the question of its leadership.

Mr. Netanyahu has refused to step aside while he defends himself against bribery, fraud and other corruption charges, becoming the first sitting Israeli leader to be indicted and face a criminal trial. His resort in recent days to rule by emergency ordinances, including shutting down the courts, raised alarms about the future of Israeli democracy.

Mr. Gantz and the left-wing, right-wing and Arab parties who rallied behind him won a slim majority of 61 seats in the 120-seat Parliament in the March election. With little in common but their enmity for Mr. Netanyahu, they were too diverse to sit together in a government.

But they had been planning to cooperate to push through legislation to stop Mr. Netanyahu from securing a fifth term, by enacting term limits or by barring an indicted lawmaker from forming a government.

In the end, however, Mr. Netanyahu’s almost nightly appeals to Mr. Gantz to join him — during televised addresses about the country’s response to the virus — appeared to wear down Mr. Gantz’s resolve.

Mr. Gantz did not say on Thursday whether he supported either of these proposals.

Thursday’s endgame was particularly head-spinning, even for the hurly-burly of Israeli politics.

Mr. Gantz went from petitioning the Supreme Court on Wednesday to censure the previous speaker, Yuli Edelstein — a Netanyahu ally who resigned rather than allow the election of a new speaker — to accepting Mr. Edelstein’s support in the Thursday vote that elected Mr. Gantz as speaker.

Mr. Netanyahu’s conservative Likud party had issued an ultimatum that if Blue and White nominated its original candidate for speaker, Meir Cohen, that would spell the end of unity talks. Mr. Cohen had been expected to advance legislation blocking Mr. Netanyahu from serving another term.

Mr. Gantz’s acquiescence to that demand — by nominating himself instead — prompted howls of denunciation in Parliament from his partners in the center and left. They said that Mr. Gantz had dashed the hopes of his voters to end Mr. Netanyahu’s career and betrayed his own countless campaign promises never to serve under an indicted prime minister, all over an empty threat.

Ahmed Tibi, a lawmaker from the predominantly Arab Joint List and a medical doctor, declared that Mr. Gantz was suffering the “virus of surrender.”

Nitzan Horowitz, leader of the left-wing Meretz party, said that Mr. Gantz’s joining Mr. Netanyahu’s government “is to spit in the face and betray the voters of Blue and White and the entire center-left bloc.”

Many Israelis, however, thought Mr. Gantz took the high road in light of the public-health emergency.

“Gantz’s decision is difficult and fraught with dangers,” Shelly Yacimovich, a former Labor party leader, wrote on Twitter, “but it is surprising for its boldness and the only one that creates any chance of a unity government. Not that a unity government is a pleasing scenario. On the contrary. But unfortunately, it is the only possible scenario.”

Though the details of any unity government deal, or whether one had been reached, remained unclear, Mr. Netanyahu’s defense minister, Naftali Bennett, did not wait to congratulate Mr. Gantz “on the courageous step of entering a unity government headed by Netanyahu.”

“This is the right thing for Israel at this time of emergency,” Mr. Bennett wrote on Twitter.

Mr. Gantz was expected to serve as speaker for a short time, possibly only for a few days, before taking on a senior ministerial role in such a government.

Two of Blue and White’s top leaders, Yair Lapid and Moshe Yaalon, said they were breaking off from Mr. Gantz’s party but keeping the name Blue and White, since their factions constituted the majority of the alliance.

After Mr. Netanyahu’s right-wing and religious bloc of parties fell short of winning a parliamentary majority in the last election, Mr. Netanyahu had seemed almost down and out.

But he has shown a Houdini-like knack for extricating himself from seemingly impossible political traps. And with the arrival of the coronavirus in Israel, he invoked the atmosphere on the eve of the 1967 war and exhorted Mr. Gantz to join forces in order to “save tens of thousands of citizens.”

Critics accused Mr. Netanyahu of exploiting the public-health crisis to buy himself a new lease on political life. Mr. Gantz had long offered to join a unity government with Mr. Netanyahu’s Likud party if Mr. Netanyahu stepped down, a concession that Mr. Netanyahu never seriously considered.

But Mr. Netanyahu’s calls for an emergency unity government proved popular among Israeli voters, impatient for some national healing and loath to contemplate a fourth straight election, leaving Mr. Gantz seeming churlish if he continued to refuse.

Though Mr. Gantz’s 61-seat majority earned him the mandate to form a government, he had few good options.

His allies rejected out of hand the idea of a unity deal with Mr. Netanyahu, who has dangled various offers to step aside after six, 12 or 18 months, saying that Mr. Netanyahu would never follow through when the time came.

There was speculation at first that Mr. Gantz would try to cobble together a minority government with the outside support of Arab lawmakers. But those prospects foundered when two right-leaning lawmakers from Blue and White said they would vote against any government that depended on Arab support.

It only remained to be seen what Mr. Gantz had gotten from Mr. Netanyahu in exchange for his stunning turnabout — and whether Mr. Netanyahu would ultimately live up to his end of any bargain.

Lessons in Love From Mom and Dad

Debra Weiner is interviewing 100 newsmakers, thought leaders and other people who’ve made an outsize difference about the most valuable thing their parents taught...

When the World Stops, Traveling in John Keats’s ‘Realms of Gold’