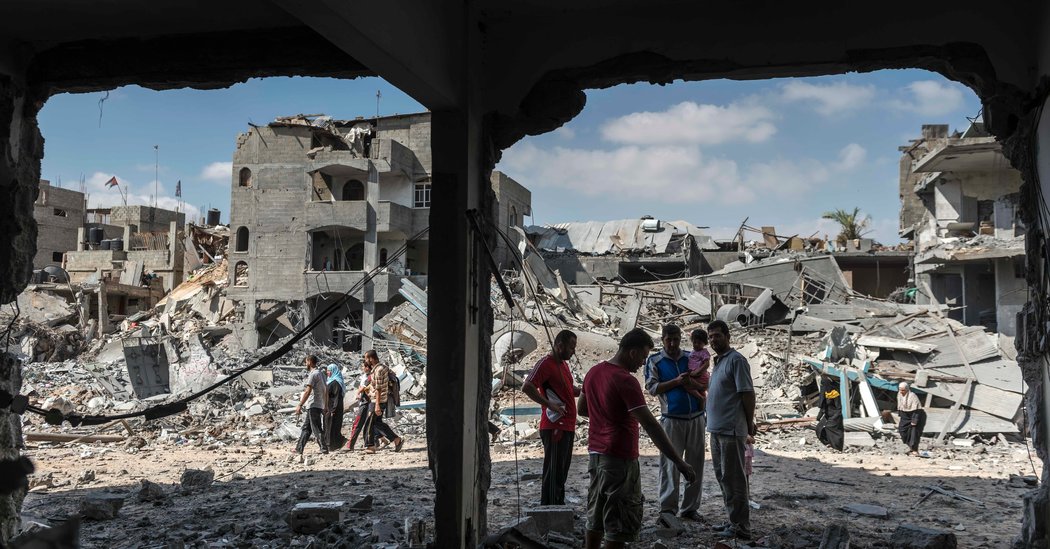 JERUSALEM — The chief prosecutor of the International Criminal Court said on Friday that she had found a basis for investigating possible war crimes by Israel in the occupied Palestinian territories. But she is first asking the court to confirm that it has jurisdiction there, which Israel insists it does not.

The announcement in The Hague by the prosecutor, Fatou Bensouda, came five years after her office began a preliminary investigation of actions by Israel that the Palestinians contended were war crimes, most notably the deadly airstrikes and destruction of the 50-day Gaza war of 2014.

“There is a reasonable basis to believe that war crimes have been or are being committed in the West Bank, including East Jerusalem, and the Gaza Strip,” Ms. Bensouda’s office said in a court filing.

Ms. Bensouda cited what she called Israel’s disproportionate use of force in the 2014 war and said other possible war crimes included Israel’s transfers of civilians into Palestinian territories in East Jerusalem and in the West Bank. She also cited as a possible war crime the Israeli military’s response since 2018 to demonstrations along the Gaza-Israel fence, where troops have killed more than 200 Palestinians, more than 40 of them children, and wounded thousands.

The formal investigation Ms. Bensouda is prepared to undertake also would examine possible war crimes by Hamas, the militant group that rules Gaza, and other armed Palestinian groups there, including those that have been “intentionally directing attacks against civilians,” using civilians as human shields , and engaging in torture and “willful killing,” her office said.

Israel is not a member of the International Criminal Court. The preliminary investigation began in January 2015, just weeks after President Mahmoud Abbas of the Palestinian Authority, over the strong objections of Israel and the United States, signed the Rome Statute, the treaty that created the court, and formally accepted its jurisdiction.

All along, Israel has maintained that the court lacks jurisdiction over the Palestinian territories. In a lengthy memo published 90 minutes before Ms. Bensouda’s announcement on Friday, Israel’s attorney general rehashed those arguments, saying that only a sovereign state “having criminal jurisdiction over its territory and nationals” can delegate authority to the International Criminal Court.

The Palestinians’ signing of the Rome Statute “did not settle the highly controversial question of Palestinian statehood,” the memo asserted.

Ms. Bensouda said that she was satisfied the court has jurisdiction but had asked for a ruling anyway, to avoid the possibility that the court could decide later in Israel’s favor on the issue.

Israeli officials erupted in anger that Ms. Bensouda had not dismissed the Palestinian claims. The country’s embattled prime minister, Benjamin Netanyahu, who is under indictment, said the prosecutor’s action was turning the court “into a political tool to delegitimize the State of Israel.”

“This is a dark day for truth and justice,” he said in a video.

But the Palestinians, while expressing impatience, welcomed the move as “a positive and encouraging step,” said Saeb Erekat, the Palestine Liberation Organization’s longtime negotiator. Ridiculing what he called Israel’s “hysterical reaction,” Mr. Erekat called Ms. Bensouda’s announcement “a message of hope to our people, the victims of those crimes, that justice is indeed possible.”

Hanan Ashrawi, another veteran P.L.O. official, posted a statement headlined, “The hour of criminal accountability for Israeli crimes is fast approaching.” She wrote that Israel’s “feverish efforts to perpetuate impunity and remain unaccountable will fail.”

And Hagai El-Ad, executive director of B’Tselem, the Israeli human rights group, called the prosecutor’s finding of a basis to proceed with a criminal investigation “the only possible outcome arising from the facts.”

“Israel’s legal acrobatics in an attempt to whitewash its crimes must not be allowed to stop international legal efforts to, at long last, hold it to account,” Mr. El-Ad said.

Celebrating the Great Australian Tradition of Meat in a Box

The artist at Smith Kebabs in Collingwood, Melbourne, has a style similar to Jackson Pollock’s. For a canvas, he uses French fries (chips!),...

Pandemic-Baking Britain Has an ‘Obscene’ Need for Flour

Which Tory MPs are calling for Cummings to go and why?