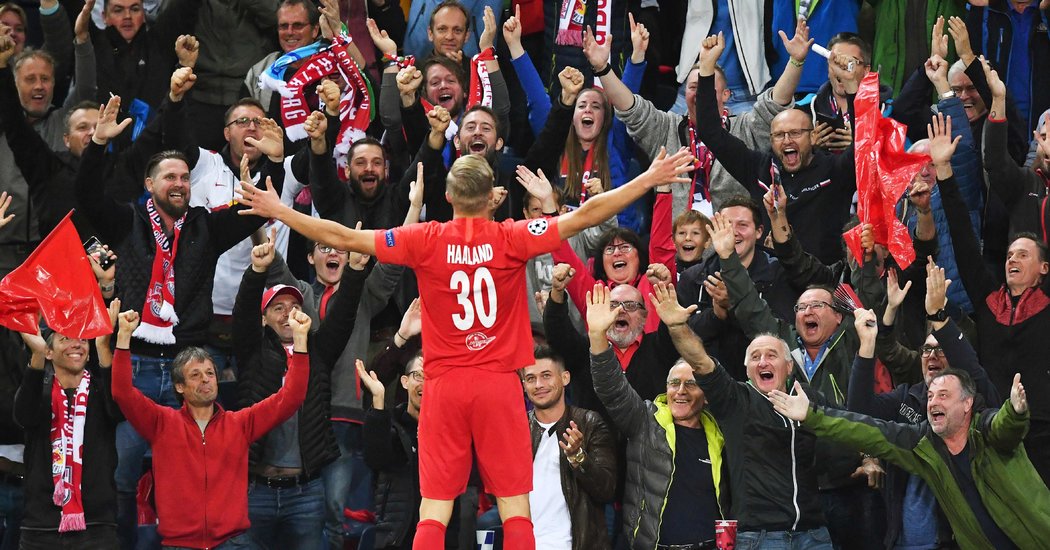 Takumi Minamino was the first of Red Bull Salzburg’s prized assets to go, snaffled up by Liverpool almost as a souvenir of the European champion’s winter visit to Austria.

Erling Braut Haaland took a little longer. According to his agent, a dozen clubs had been pursuing Haaland, the 19-year-old Norwegian striker. including Manchester United and Juventus. Haaland took time to consider each and every one before deciding, in those drifting, dozing days between Christmas and New Year’s Day, to join Borussia Dortmund.

For Salzburg, the departures of Minamino and Haaland will be bittersweet. Sweet because they represent further vindication of the club’s model, its focus on identifying and developing young talent, granting starlets the chance to play intense, adventurous soccer at a far younger age than they might elsewhere, and then selling them on to richer pastures. Now, the next time Salzburg alights on a player it covets, the club’s scouts will be able to add Minamino and Haaland to a list of inspirations that already includes Sadio Mané, Naby Keita and Dayot Upamecano.

And bitter, of course, because it is only a year since Haaland arrived in Austria; only a few weeks since Salzburg’s courageous, quicksilver young team — melded together by Jesse Marsch, its American coach — was fraying the nerves of Liverpool and Napoli in the Champions League.

It is odd to feel sympathy for a venture that is essentially a marketing strategy for an energy drink, but still: It would have been nice to see how a full-strength Salzburg did in the Europa League, for Marsch to have two of his finest players available to him for a full season.

For Haaland, though, this is how it was meant to be. His career, guided in no small part by his father, Alfie — a Premier League player with Leeds United and Manchester City — has been mapped out in the finest detail.

He left his hometown club, Bryne, for Molde, in 2017. There were bigger clubs chasing him — he visited a dozen or so of Europe’s elite, to see what plans they might have for him — but, together with his inner circle, decided Molde, Norway’s current powerhouse, was the best place for him.

He stayed for 18 months before moving on again: not for one of the teams in Germany or England that were now sending scouts to watch him most weeks, but for Salzburg, the first European rung on the Red Bull ladder.

Haaland wanted to play regularly, first and foremost, and the Red Bull model would allow him that. He needed exposure in European competition: given that Salzburg has won the Austrian league for most of the last decade, that would not be an issue.

And he wanted to go to a club that would not stand in his way when the time came to leave. The pathways afforded to Mané and Keita would have helped there, but he made sure to have a $22.5 million release clause inserted into his contract just in case.

Haaland and his advisers seem to have used the same rationale in picking Dortmund. Dortmund needs a traditional striker, and needs one now. It is a regular in the Champions League. (It also reportedly agreed to pay exorbitant fees to Haaland’s father and his agent, Mino Raiola.)

In the modern market — in which almost every vaguely well-run, ambitious club has pivoted to signing young players with potential rather than established stars — that self-awareness is crucial. It is tempting to wonder if a lack of it counted against United and Juventus, in particular.

Had he looked at Paul Pogba at Manchester United, priced out of a move last summer away from a club he very clearly no longer wishes to be at, or Eden Hazard, compelled to wait until his late 20s to get his move to Real Madrid, he would have seen that England’s powers-that-be are happy to buy, but often are unwilling to sell. Certainly, joining one of the Premier League’s big beasts would have complicated subsequently moving to any of the others.

That, now, is a disadvantage for everyone except, perhaps, Real Madrid, Barcelona and possibly Bayern Munich and Manchester City. The very best young players do not want to find their options limited, their best-laid plans stymied by an employer that wants to hold on long after they had hoped to let go.

This is an era in which the players hold the leverage. They have, and are aware of having, agency. Clubs have to bend to that, with only a handful of exceptions. To buy, you have to make it clear that, one day, you will sell.

In a League of Its Own

Not long after his Monterrey team had edged Club América to claim the Liga MX title last weekend, Charly Rodríguez — the standout player of the season — was asked to address bubbling speculation that he might be about to cross the Atlantic.

“I’d love to go to Europe,” he said. “It’s something that everyone dreams of. But these are my colors, and this is my team. I wouldn’t be bothered if I stayed here forever.”

There is an assumption, in Europe, that it is the ultimate destination for every soccer player. It is, after all, where you can make the most money, play for the best teams, and test yourself either alongside or against the best players. Mexico, though, is slightly, wonderfully different.

It was intriguing to note the surprise that greeted Monterrey’s excellent performance against Liverpool in the Club World Cup last month; it had been widely assumed that a Mexican team would be no match for an emissary of the mighty Premier League.

But that ignores the fact that Mexican clubs are not, really, great exporters: only 11 players (of dozens) called up for the national team in the last year are based abroad. The wages are good, and the acclaim is deafening: the Liga MX final was the highest-rated club game broadcast in the United States last year. Mexico’s best players have always tended to stay. Liga MX is no backwater.

If that is good for the league, you wonder if it is not great for the national side. I’ve written before about the importance of being plugged in to soccer’s greatest network — the one in Western Europe — and El Tri may suffer because it is not. That is starting to change, now. Perhaps European perceptions of Mexican soccer will, eventually, follow suit.

Unless you are an ardent follower of Hull City, you may not have heard of Leo Lopes, a 21-year-old Portuguese midfielder who has spent the last six years working his way through England’s lower leagues. He may, though, represent something of a changing of the guard for an entire league.

This month, Lopes could move to Major League Soccer, to play for the Red Bulls. To most, it would not represent a dial-shifting transfer: Lopes is hardly a Zlatan or a Rooney or a David Villa. But he is precisely the sort of profile of player that M.L.S., increasingly, is trying to attract: young, gifted, energetic — a player seeking a stage to demonstrate the scale of his talents, rather than a place to mask how much they are waning.

It is the sort of move that more and more M.L.S. teams are trying to make, looking for new players either in South America — where Atlanta United, of course, has had so much success — or in Europe’s smaller markets and lesser leagues. New York City F.C., for example, has found that it can find players that suit its budget, appeal and style in leagues as diverse as Sweden and Romania.

In time, that may start to influence the very nature of the American league, increasing the tempo of its play, the dynamism of its style. Lopes, though he may not realize it, could be in the vanguard of something approaching a revolution.

In Case You Missed It

Liverpool’s Premier League title challenge has, basically, been built on winning games by 1-0 and being told that it is not playing as well as it might. At Leicester last week, though, Jurgen Klopp’s team proved rather neatly that it has another gear as and when required. A few days later, in another Liverpool win, we got confirmation that the offside law is no longer fit for purpose, though for some reason everyone insists on blaming V.A.R.

There are few more captivating figures in global soccer, meanwhile, than Mario Balotelli, even now, seven years on from what can now safely be called the peak of his career. He is back home now at Brescia, in the city where he grew up, the city he never really left. But in reporting that story, and talking with those who know him best, I began to wonder whether someone like Balotelli, with all he has been through, can ever really feel at home.

What better way could there be to start the new year than with a mea culpa? There was a distinct theme to your correspondence this week: how, precisely, did I manage to summarize an entire decade without mentioning women?

“It’s like you told a story and left out a main character,” Chelsea GawneMark wrote. “I believe the decade was defined by how it ended — with a fan base and revenue that has never been larger.” Dana Friehauf suggested that such a “lack of recognition of the accomplishments in soccer of the USA women’s team is a perfect example as to why women’s sports do not get the respect and recognition they deserve.”

Without any qualms at all, I can say that yes, clearly, the rapid and substantive development of the women’s game — driven by the United States, but also by club teams like Lyon and national sides across Europe — is one of the defining elements of the 2010s in soccer, and it was remiss not to mention it. Especially, as it happens, because the activism and advocacy of Megan Rapinoe, in particular, neatly fit in with the broader (and nongendered) theme of last week’s column, on the power of social media.

The challenge for the 2020s, of course, is to build on that: I’m intrigued to see what Lyon does now that it owns Reign F.C. in the National Women’s Soccer League, and I’ve mentioned a few times that I think there is something of a power shift toward Europe, now that the historic men’s clubs are showing some commitment to the women’s game. But the broader point, that we have a role to play, too, is taken on board, rest assured.

That’s all for this week. Thanks for all the correspondence, as ever. If you need to chastise me only briefly, I’m on Twitter. If it requires further thought, drop me a line at askrory@nytimes.com. There’s a podcast you might enjoy, too, if you enjoyed this newsletter. And you can tell everyone you know about how nice it is to get an email from me every Friday here.

Have a great weekend, and happy new year.

This week in Love Letter, we want to help you plan your binge-watching weekend. If you’re looking for a new show to add to...

Jimmy Kimmel Scorches Donald Trump With The Line Of The Night...