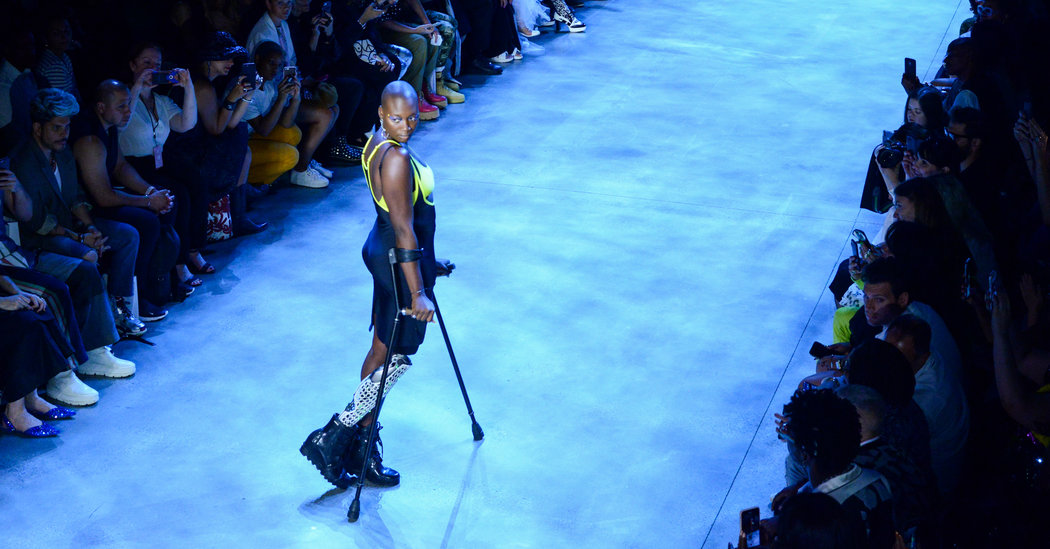 Mama Cax, an advocate of people with disabilities and a rising model who helped disrupt the fashion industry’s standard of beauty by not shying away from displaying her prosthetic leg on the runway and in fashion campaigns, died on Dec. 16 at Royal London Hospital. She was 30.

Her agency, Jag Models, confirmed her death. A cause was not given, but a statement shared on Ms. Cax’s official Instagram account on Friday said that she had spent the past week in the hospital leading up to her death.

Ms. Cax, whose real name was Cacsmy Brutus, shared in a post on Dec. 12 that she had experienced severe abdominal pain while in London and sought medical attention. She later learned that she had blood clots in her leg, thigh and abdomen and near her lungs, she said.

“As a cancer survivor, she had grown accustomed to taking on life’s several challenges head on and successfully,” the statement said. “It is with that same grit (fervor) that she fought her last days on earth.”

Ms. Cax, who was born on Nov. 20, 1989, in Brooklyn, is survived by her mother, Marie Vilus; her father, Cacsman Brutus; and four sisters, Sabienne, Lei, Cassline and Ashley.

Ms. Cax studied in New York, France, Tunis and Rome, and had bachelor’s and master’s degrees in international studies, according to her website .

As a teenager, Ms. Cax learned she had bone and lung cancer and had a hip replacement after her treatment, according to an interview with Glamour. However, her body rejected the hip and she had her right leg amputated.

She struggled to accept the changes.

“I probably spent one or two weeks without looking at my body whatsoever,” she told the magazine. “That sort of disgust lingered and lasted throughout my early years in college. Feeling beautiful or being in a space where I would feel beautiful was not at all on my radar. It wasn’t a priority because I figured I could never get there.”

Along the way, Ms. Cax also began blogging about lifestyle and travel. She used her platform to inspire other amputees, and drew attention by dressing up her prosthetic leg.

“I didn’t see body appreciation being shown to people with disabilities or people with scars, so I started sharing my story on Instagram,” she told The New York Times in May. “I was sharing for women who don’t see themselves as beautiful and don’t see their bodies celebrated.”

She secured her first campaign in 2017 and eventually signed with Jag Models, according to Glamour.

“It was so surreal knowing there can be a space for me in beauty,” she said. “From that point on, I knew I had an ability to break certain barriers.”

In her career, Ms. Cax landed campaigns for Tommy Hilfiger and Sephora, and graced the September 2018 cover of Teen Vogue. She also walked in a fashion show at the White House, as well as in shows for Chromat and Savage X Fenty, a brand by Rihanna, who called Ms. Cax a “powerhouse beauty” in a tribute.

“She was representing a whole community that’s always been either misrepresented or just been invisible,” Jillian Mercado, a close friend and fellow model, said on Saturday. “She was really good at educating people on not only her disability, but how you can be an ally to the community. She was one of the first people who had a disability on the catwalk.”

Stephanie Thomas, a disability fashion styling expert who worked with Ms. Cax, said her impact on the fashion industry was “undeniable.”

“She wasn’t afraid to be herself,” she said. “What I loved about it is that she challenged norms not by putting other people down, but by having the courage to, you know, really express herself through fashion.”

How to Grow More Vegetables This Season

Hoping to Buy an Aboveground Pool to Salvage Summer? It May Be Too Late

Jennifer Lopez and Shakira will perform at the half-time show during the 2020 Super Bowl, the National Football League (NFL) has announced. American football's governing...

Stephen King: Oscars are ‘rigged in favour of white folks’