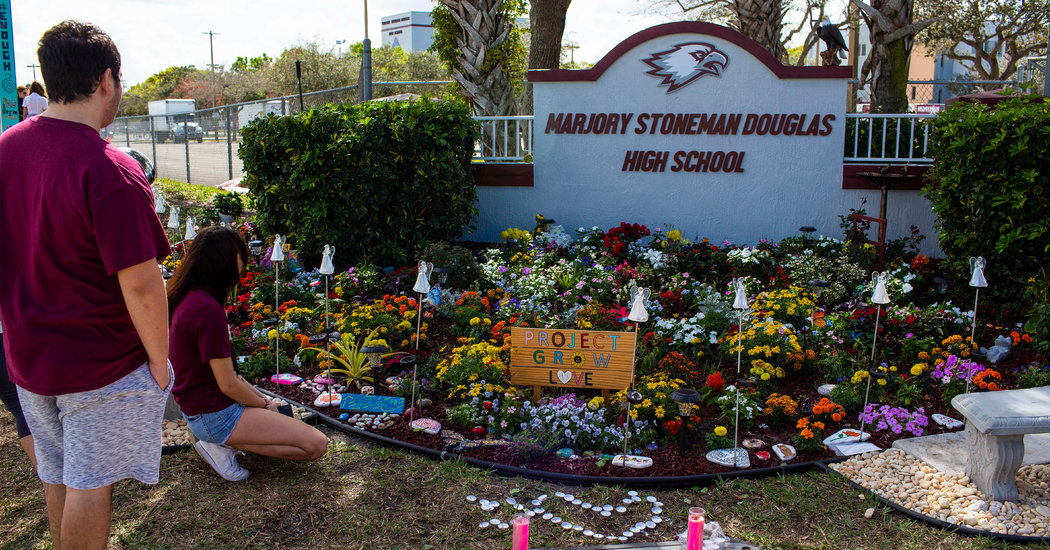 A 22-year-old California man was sentenced to 66 months in federal prison on Monday after cyberstalking and threatening to kidnap relatives of those killed in the 2018 mass shooting at Marjory Stoneman Douglas High School in Parkland, Fla., federal prosecutors said.

The man, Brandon Michael Fleury, impersonated the confessed gunman on social media for three weeks to threaten and taunt survivors of the shooting and victims’ loved ones. He was found guilty in October of three counts of cyberstalking and one count of transmitting a kidnapping threat.

Sabrina Puglisi, Mr. Fleury’s lawyer, said she was disappointed that the judge did not place Mr. Fleury in a residential treatment program, given that he has autism spectrum disorder. However, she said, she was pleased the judge’s sentence was much lower than the maximum 20 years that Mr. Fleury had faced.

“The judge made a strong argument that this type of trolling behavior on the internet is not OK, not acceptable and it won’t stand,” Ms. Puglisi said in an interview on Monday. “He wanted to send a message to deter people from doing the same.”

A spokesman for the U.S. attorney’s office did not immediately respond to requests for comment on Monday.

From late December 2018 into early January 2019, Mr. Fleury used 13 different Instagram accounts to target survivors and victims’ families, prosecutors said. He operated under various aliases, including Nikolas Cruz , the man who has confessed to killing 17 people at Stoneman Douglas, and Ted Bundy, the notorious serial killer, according to prosecutors.

From his home in Santa Ana, Calif., Mr. Fleury sent dozens of messages.

According to prosecutors, some of the messages included: “I’m your abductor I’m kidnapping you fool,” “I killed your loved ones hahaha,” “Did you like my Valentines gift? I killed your friends” and “With the power of my AR-15, I take your loved ones away from you PERMANENTLY.”

He used Instagram handles that included “the.douglas.shooter,” “nikolas.killed.your.sister” and “nikolas.the.murderer,” and used images of Mr. Cruz as profile pictures on the accounts, according to court documents.

Mr. Fleury expressed remorse in a 25-minute video that was shown at the sentencing hearing on Monday, Ms. Puglisi said.

“As you can imagine, he just wants to go home,” Ms. Puglisi said. “He never thought that what he did was illegal. He thought he was just doing trolling, which is what so many people do on the internet. He never intended to scare anybody, so for him this is obviously a nightmare.”

Mr. Fleury’s father, who raised his two sons on his own after his wife died about 17 years ago, spoke at the hearing and apologized to the two victims who were present, Ms. Puglisi said.

Mr. Fleury was taken into custody when he was convicted five months ago, Ms. Puglisi said. He was then transferred to a prison in North Carolina, where his mental capabilities were evaluated for several weeks.

The judge has recommended Mr. Fleury serve his time at a low-security prison in Connecticut, one of only two in the country with a skill-building program offered to prisoners with different disabilities, his lawyer said.

The Earl Of Snowden Becomes 2nd Royal To Announce Divorce In...

LONDON (Reuters) - The Earl of Snowdon, the nephew of Britain’s Queen Elizabeth, and his wife of 26 years are to divorce. The earl, David...

Grocery Shopping For A Quarantine: What To Buy And How Much

Three Things Lockdowns Have Exposed About Working and Parenting

‘How? How? How?’: Victims’ Families Rage as Matt Bevin Defends Pardons