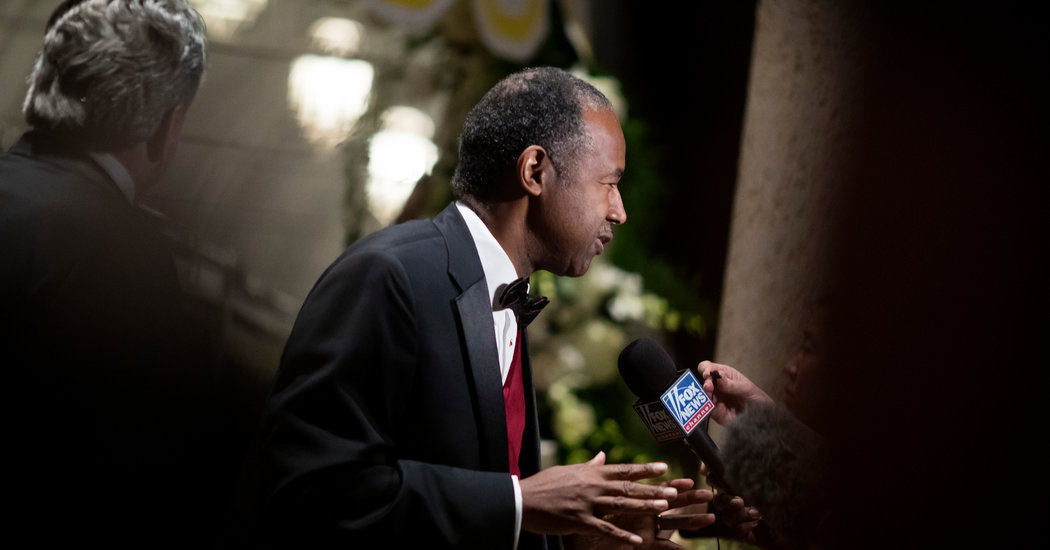 WASHINGTON — The Iowa caucuses on Monday will be a competitive race for only one party, the Democrats, but President Trump’s campaign does not see it that way.

Roughly 80 cabinet secretaries, administration officials and members of Congress will descend on the state that day to drive voter enthusiasm and make a show of force intended to jolt whoever emerges as the Democratic caucus winner.

The surrogates will include two former presidential candidates who once campaigned against Mr. Trump in Iowa: Housing Secretary Ben Carson and Rick Perry, the former energy secretary.

Mr. Trump’s acting chief of staff, Mick Mulvaney, as well as Commerce Secretary Wilbur Ross will fan out to speak to Iowa voters at various caucus sites. A group of Trump loyalists from the House — including Representatives Elise Stefanik of New York, Jim Jordan of Ohio, Mark Meadows of North Carolina and Matt Gaetz of Florida — will also be on the ground to make their case for Mr. Trump, the campaign announced Tuesday.

They will be joined by a host of loyal “formers,” including Mr. Trump’s former 2016 campaign manager, Corey Lewandowski; the former White House communications director, Bill Shine; and Matthew Whitaker, an Iowa native who briefly served as the acting attorney general.

“Our Caucus Day operation is just a preview of what is to come,” said Brad Parscale, Mr. Trump’s 2020 campaign manager. “This will be the strongest, best funded and most organized presidential campaign in history. We are putting the Democrats on notice: good luck trying to keep up with this formidable re-election machine.”

The idea is to show off a deep well of support for Mr. Trump even as Democrats are choosing their nominee in a nail-biter of a contest that will help whoever emerges as the winner and determine the shape of the rest of the party’s primary fight.

Senator Bernie Sanders, the crowd-drawing independent from Vermont, has placed first in Iowa in a series of polls, and Mr. Trump has recently been seeking to elevate his candidacy . Mr. Trump has also been focused on Michael R. Bloomberg, the billionaire former mayor of New York City, who is running a parallel effort in the states that will vote on Super Tuesday on March 3 and skip Iowa altogether.

Incumbents — and party nominees — often try to swamp early states where their opponents are campaigning by flying in government officials who volunteer their personal time for the campaign, along with lawmakers and aides. But Mr. Trump’s show of force is still unusual.

“I’m even pleasantly taken aback by this over-the-top interest in Iowa,” said Jeff Kaufmann, the chairman of the Iowa Republican Party. “This is about making a statement on the part of the president.”

Mr. Trump placed second in Iowa in 2016, after Senator Ted Cruz of Texas. This time around, two Republican challengers, Joe Walsh, a former Illinois congressman, and Bill Weld, the former governor of Massachusetts, have failed to make any dent in Mr. Trump’s support from Republican voters.

But the Trump campaign said their showing in Iowa was less about two opponents it has been studiously ignoring and more about recruiting volunteers and small-dollar donors, with whom they will continue to engage through November.

“Strategically, it’s important for Trump surrogates to be in Iowa to consume some of the media coverage,” said David Bossie, who was Mr. Trump’s deputy campaign manager in 2016 and plans to participate in the Iowa offensive. “We want to plant the flag, because we are looking ahead to the general election.”

Mr. Bossie said it would be a mistake to ignore a battleground state simply because there was no competitive primary on the Republican side.

“I don’t think anybody on that plane is worried about Bill Weld,” added Matt Schlapp, the chairman of the American Conservative Union. “This campaign is always on offense; it’s on its front foot. It doesn’t give Democrats a day to do their own thing.”

Mr. Trump himself is expected in Des Moines for a rally on Thursday night, a move Mr. Kaufmann compared to President Ronald Reagan showing up in Iowa during his re-election campaign in 1984.

“Back then, he had no competition in the caucus, but he made it a statement that he’s not taking Iowa for granted,” Mr. Kaufmann said. “For all practical purposes, this is the beginning of the general election.”

How the Butterfly Discovered Daylight

Once upon a time, perhaps some 300 million years ago, a tiny stream-dwelling insect akin to a caddis fly crawled from the water and...

France Judges Dead Jihadists but Refuses to Repatriate the Living

Why Block Impeachment Witnesses? Republicans Have Many Reasons