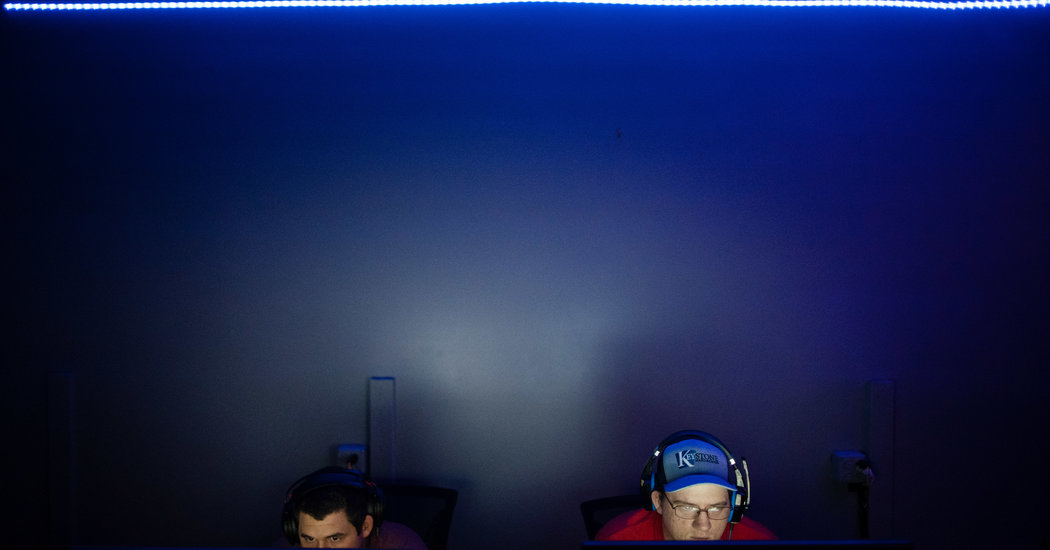 NEWNAN, Ga. — A few blocks from downtown, inside a building with a brick and stucco facade, two men were immersed in an e-sports event, one of the safer competitions remaining in a sporting world upended by the coronavirus pandemic.

The men — Tyler Mercer, 24, and Chris Caldwell, 23 — call themselves Killer Instinct for online video gaming purposes, and they were at Newnan Esports on March 21 playing Call of Duty: Modern Warfare. Six teams were competing, though the other teams were playing from homes nearby.

Hayden Marlowe, the owner of Newnan Esports, opened his business so Mercer and Caldwell, the reigning champions, would have access to the fast internet speeds that gaming demands. The two live in rural Pike County, Ga., where their bandwidth isn’t as snappy as it is in Newnan, a town of nearly 40,000 about 40 miles southwest of Atlanta.

Though not mandated to, Marlowe closed his store on March 16 after the Centers for Disease Control and Prevention issued guidelines to limit gatherings to 10 or fewer people. Atlanta’s stay at home order went into effect on March 24, and other cities in Georgia have followed suit.

“We don’t want to be the reason why people get sick,” Marlowe said. “We want everyone to be healthy and heed government warnings when they’re warranted.”

He added: “We also have the capability to not have to be here. E-sports has the ability to be played online, and you can organize through many apps that are available on the internet.”

Though e-sports can be played from nearly anywhere in the world, Marlowe markets his company and tournaments to those living within a 50-mile radius of his store.

Three of the 10 gaming stations inside his establishment were being used on March 21, two by Caldwell and Mercer and one by Marlowe, 29, who was reporting the action as it streamed on Facebook. A few friends had also stopped by to watch.

Once the tournament started, at 6 p.m., the only sounds inside Newnan Esports, a former dance studio, were Marlowe’s commentary and Killer Instinct’s instructions to each other as they spotted enemies while navigating different Call of Duty maps.

“He’s right above me,” Caldwell said to Mercer before a quick fist bump as one skilled shot resulted in a kill.

Marlowe opened Newnan Esports in February. This was the third tournament he hosted, though it was the first one that took place online. The others were played in-house, with about 30 players and fans packed into the building. While gamers are sometimes stereotyped as being antisocial, the social aspect of video gaming is actually alluring, he said.

“But since we’re not supposed to be social right now, it kind of takes away from that a little bit,” he said. “But luckily the infrastructure is there to still maintain a sense of normalcy, you know, in still playing with local players.”

The pandemic was on the minds of Mercer and Caldwell, but their lives have largely been uninterrupted, they said. They still have their jobs at construction equipment companies.

“We’re taking it seriously, but not panicking at the same time,” Mercer said. “Just try to stay out of people’s way as much as possible and not go out and do as much as we were, but also not be at home not doing anything.”

The pair won the tournament again, defeating Dementor Gaming, 3-2, in a tense final contest that lasted about 20 minutes.When the tournament was all over, after nearly three hours, Killer Instinct walked away with $80 to share. Marlowe said his take might be $20.

“It’s not like I’m doing well with it,” Marlowe said. “It hurts that we’re new, so we’re trying to get our name out there. Every week we’re doing something. It’s a chance to reach someone new.”

How Kobe Bryant Created His Own Olympic Dream Team

The N.B.A. May Return Too Soon

Sweaty Scrums? How Rugby May Adapt to Return to Play

How to Race the Sydney Hobart? Break It Into Its Parts

Sailboat races have a way of developing their own lore, especially when there are boat-breaking waves and fast-moving weather systems. It is easy to...

At Anton’s, Appetites Shaped by an Older New York