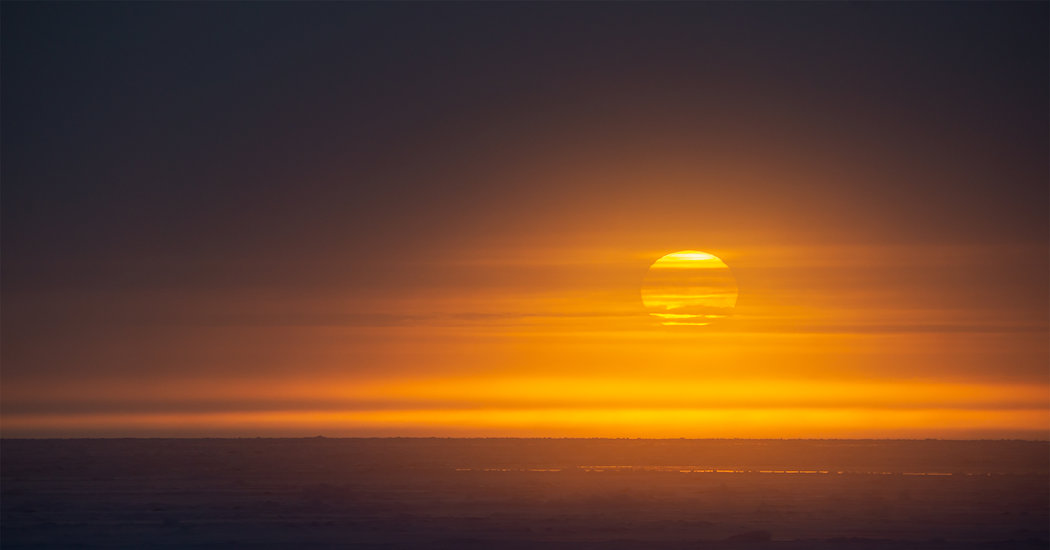 Low on the horizon, the sun casts an eerie light on the icy sea. For several hours, the glow transforms the colorless terrain into shades of pink as the sun does not rise or set, but edges to the side — traveling in a semicircle before slowly sinking one last time.

I am far north in the Arctic Ocean, and polar winter has just begun.

Every year, the North Pole tips away from the sun and the region is plunged into darkness for months, meaning that the sun will disappear with a final sunset in the fall and reappear with an initial sunrise in the spring. But precisely calculating these dates is challenging.

In the Arctic, the air temperature slowly decreases the higher you get above the sea. Then it significantly increases — a temperature inversion that causes a change in air density. That makes light from the sun bend around the horizon, similar to the way your arm appears to bend below water. The result is the sun seeming to hang in the sky even after it has physically dropped below the horizon.

If fluctuating weather allows you to see it. The location and strength of the temperature inversion changes daily — and occasionally hourly — making it difficult to predict when this odd effect will occur.

I’m currently onboard the German icebreaker Polarstern, which is frozen within the Arctic ice at roughly 85 degrees north latitude and 130 degrees east longitude. The mission, better known as the Multidisciplinary drifting Observatory for the Study of Arctic Climate, or Mosaic, is one of the largest climate-change research expeditions to the central Arctic. But even as scientists set up instruments on the ice to gather data on climate change and mind a nearby polar bear and her cub, they can’t help but admire the sun, when it appears.

At this time of year, the sky is always smothered in thick clouds. But on Oct. 5, those clouds parted for the first time — allowing us to see the sun one last time before the onset of polar winter. And the sight was surreal.

Not only did it edge sideways, but you could also clearly see that the disk of the orange sun was not a perfect circle, but appeared slightly squished. Thanks to the temperature inversion, light from the lower edge, which has to travel farther, was bent more than the light from the upper edge.

It was the first hint that the Arctic is deceiving.

When Fridtjof Nansen, a Norwegian explorer, observed the sun during an 1893 Arctic voyage, it was not a circle — but a rectangle. He was actually seeing the slightest sliver of the sun above the horizon several times, one on top of another, building a rectangle.

Other polar travelers might see distorted ships, icebergs and bays levitating in the sky.

“The eye is often fooled in polar regions,” said Markus Rex, an atmospheric scientist at the Alfred Wegener Institute in Germany and the Mosaic coordinator.

But Andrew Young, an atmospheric scientist at San Diego State University, cautions that even the most extreme mirages are not easily noticed by the casual observer because the vertical extent of the distorted images at the horizon is puny.

So shortly after the sun set on Oct. 5, I accepted that I might not be as lucky as Mr. Nansen.

Still, the sunlight over the next few weeks was sublime. Every morning when the sun reached a certain point just below the horizon, the sky would transition from a deep-sea blue to a hot pink — illuminating the ice with a surreal light.

“That never ceases to amaze me,” said Ian Brooks, an atmospheric scientist at the University of Leeds onboard the Polarstern. “In one way it’s a monotonous landscape — it’s just flat ice with a few ridges — and yet every time the light changes, it changes quite dramatically.”

On Oct. 10, I was walking on the ice floe roughly 300 feet beyond the ship when I glanced toward the southern horizon only to see a column of dazzling light. I did a double-take and realized it was shining upward from the base of the rosy sky. The light pillar was not the sun itself, but its reflection within ice crystals that had sunk to low altitudes — like mirrors that reflected the sun upward.

Not only deceiving, the Arctic is mesmerizing.

House Hunting in Sweden: An Entire 62-Acre Village for $7.2 Million

Reading ‘Us’ Through Its T-shirts

You could watch Jordan Peele’s “Us” a dozen times and still not catch all of the symbolism, references and ideas tucked in it. Yes,...

Lori Loughlin And Husband Put House Up For Sale For $28.6...

‘Back To The Future’ Writer Explained ‘Plot Hole’ Years Ago