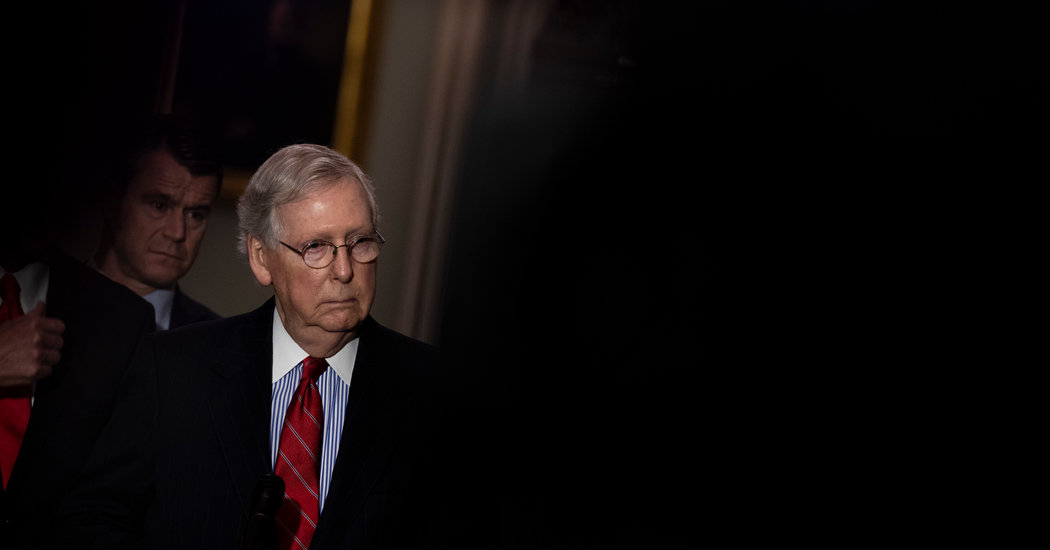 WASHINGTON — Senate Republicans are conflicted about how quickly to move on an impeachment trial against President Trump, with some arguing for a speedy vote on the charges and others seeing an opportunity to drag out the historic proceedings and tie down some Democratic senators at a prime moment in their presidential campaigns.

Republican senators say the split over how to approach what is likely to be the first presidential impeachment trial ever to unfold in an election year has been on vivid display in their private weekly lunches in the Capitol.

Some senators argued last week that the articles of impeachment likely to emerge from the House later this year do not merit the slightest consideration, and should be quickly dispensed with, so as to limit the damage they could do to Mr. Trump and his party. Others mused with relish this week about the prospect of keeping the six Democratic presidential candidates who are sitting senators chained to their desks in the Capitol for weeks on end as crucial primary contests unfold.

“There are lots of different opinions within the conference as to how long the impeachment in the Senate will take or should take, and those are different questions,” said Senator John Barrasso of Wyoming, the No. 3 Senate Republican. “Clearly there’s not 51 votes for any one thing, so this is going to have to begin and then play out over time.”

Keeping anxious candidates stuck in Washington during campaign season, rather than out connecting with voters, is a tried-and-true political tactic in Congress. But the strict Senate rules for impeachment would take it to an extreme.

Under Senate requirements for an impeachment trial, senators must sit attentively at their desks every afternoon except Sunday. That means they would not be able to flit in and out of Washington for occasional votes while spending most of their time campaigning in Iowa, New Hampshire and South Carolina, or on the phone raising money. Senators could choose to skip the proceedings, but then would likely have to contend with accusations they were shirking their constitutional responsibility.

Senator Mitch McConnell, the Kentucky Republican and majority leader, was the first to raise the potential dilemma for the six presidential contestants — Senators Cory Booker of New Jersey, Kamala Harris of California, Amy Klobuchar of Minnesota, Michael Bennet of Colorado, Bernie Sanders of Vermont and Elizabeth Warren of Massachusetts.

“The question is how long does the Senate want to take,” he told reporters last week. “How long do presidential candidates want to be here on the floor of the Senate, instead of in Iowa and New Hampshire and all of these other related issues that may be going on at the same time?”

Mr. McConnell may have been trying to drive home for Democrats the downsides of dragging out the trial, but he helped instigate a new school of thought — that Republicans could disrupt the Democratic primary by themselves prolonging the process. Senator Richard M. Burr Republican of North Carolina, added fuel to the idea when he speculated aloud that a Senate trial could take six to eight weeks — longer than the five-week trial for President Bill Clinton in 1999.

Mr. Burr told colleagues that he pulled the number out of the air based on his own experience as a member of the House during Mr. Clinton’s impeachment, but his comments spurred senators to begin discussing among themselves the disadvantages for the Democrats. A prolonged trial could have implications for the president as well, allowing new information to emerge and potentially giving public credibility to the accusations against him.

At the same time, close Republican allies of the president argue a speedy dismissal would convey to the public that the Democratic claims against him are groundless and unworthy of even the barest consideration.

“I think it’s purely a partisan adventure right now by the Democrats, so I think the shorter the better,” said Senator Rand Paul, Republican of Kentucky. “I think we’re having a debate over policy, not really over impeachable offenses. The sooner we can be done with it, the better.”

That approach has its own problems. It worries embattled Republican senators up for re-election who don’t want to be seen by independent voters as unwilling to seriously consider that the president may have acted inappropriately.

Mr. McConnell has also been cold to the idea of an immediate dismissal of the charges against Mr. Trump, telling colleagues that he believes the Senate must show that it is approaching an impeachment trial with solemnity and seriousness. Any hint that Republicans were focused mainly on sabotaging Democratic presidential candidates would undercut that effort. Mr. McConnell is also loath to force Republican members into any high-profile votes that show division among them, and a quick motion to dismiss probably would.

“I think it’s impossible to predict how long we’ll be on it or predict which motions would pass,” Mr. McConnell said Wednesday as the first public impeachment hearing unfolded in the House. “No way to know.”

Republicans said the new focus on timing — and the implications for the Democratic presidential contenders — could have a positive benefit for both sides, serving to force senators to concentrate on just how they want the trial to develop as they move slowly toward bipartisan negotiations on ground rules for the trial.

As for the presidential hopefuls in the Senate, most seem resigned to the idea that they will be forced to spend more time at their day jobs during a pivotal period in the race for their party’s nomination. The first caucus, in Iowa, will be on Feb. 3.

The trial could conceivably provide an advantage to top-tier candidates not in the Senate such as Pete Buttigieg and former Vice President Joseph R. Biden Jr., himself a former longtime senator, allowing them more time alone with early-state voters while their rivals sit quietly through an impeachment trial in Washington.

“You don’t want to see it this way, but if he’s here in Iowa and six of his main competitors have to be in Washington, I think it’s going to help him,” said State Representative Bruce Hunter, an Iowa Democrat supporting Mr. Biden. But he was quick to note that many of Mr. Biden’s opponents have strong field organizations, and that Iowa Democrats expect the senators to meet their obligations on Capitol Hill in a moment of national crisis.

While being in Washington for an impeachment trial could afford endless cable news time for the six senators running for president, it would hinder their ability to push stories to early-state local news outlets, the sort of coverage campaigns prize in the run-up to the first nominating contests, officials with several 2020 campaigns said this week.

Yet the senators and officials with their campaigns have said in recent days that they have an obligation to attend an impeachment trial of the president.

“Will your schedule change if there’s an impeachment trial? Yes, yes,” Ms. Klobuchar said earlier this month at a stop in Iowa. “But you see, I have the most endorsements of anyone from elected officials in the presidential race, so I have a lot of nice surrogates.”

Mr. Sanders, during an interview with ABC News that aired Sunday, said he would be forced to adjust his schedule to attend an impeachment trial.

The C.D.C. Waited ‘Its Entire Existence for This Moment.’ What Went...

Listen to This Article Audio Recording by Audm To hear more audio stories from publishers like The New York Times, download Audm for iPhone or...

The Best Movies and TV Shows New on Netflix Canada in...

The Watch Is Smart, but It Can’t Replace Your Doctor

Breakup of UK a price worth paying for Brexit, say Leave...