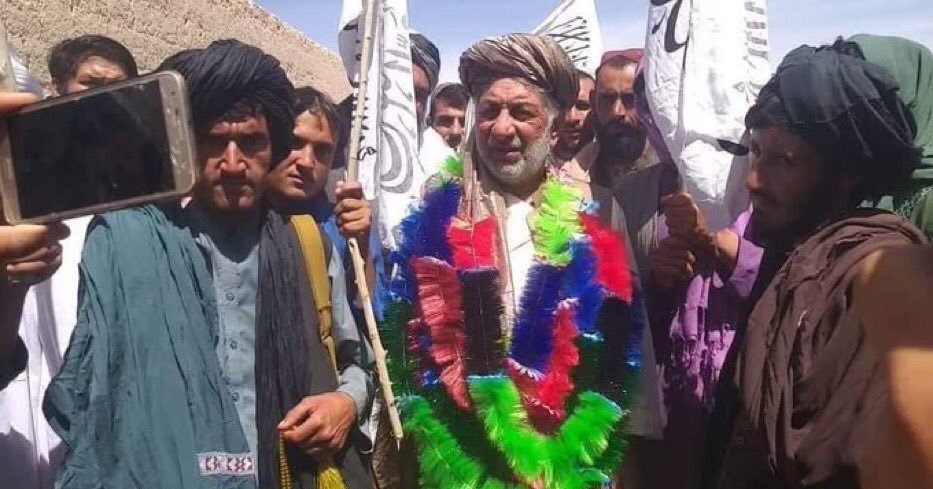 KABUL, Afghanistan — As a onetime police chief of the restive province of Farah in western Afghanistan, Gen. Abdul Jalil Bakhtawar was a dogged enemy of the Taliban.

Even when he faded into retirement, he always had a foot in the war. The insurgents sent suicide bombers after him. His sons, one growing to lead the local assembly and another serving as deputy governor, were on the front lines. When the assembly chief son died in a helicopter crash in a Taliban area, the insurgents took his body hostage for days.

Despite that, in a shocking turn that officials say could hurt the security of Farah Province, the retired general switched sides on Sunday, joining the Taliban.

The defection fits right into the Taliban’s propaganda push, as they focus on chipping away at the legitimacy of the Afghan government after signing a deal with the United States that has started the withdrawal of the American forces.

“We regret that the retired general has joined the enemies of peace and stability in Afghanistan, and has chosen violence over a life of dignity,” said Tariq Aryan, the spokesman for Afghanistan’s interior ministry.

In a statement, the general’s son Massoud Bakhtawar, who is the deputy governor of Farah, tried to play down the episode even as he distanced himself from his father’s actions. He said the retired general had visited his home district of Balaboluk to make peace between two warring tribes, and some are “misrepresenting” his trip.

“I repeat one more time,” his son said in the statement, “some opportunists are connecting the trip of General Bakhtawar to the deputy governor of Farah when this issue is an individual action.”

The insurgents put out pictures of the general’s joining ceremony: He was shown wearing a turban, garlands of flowers around his neck and surrounded by Taliban fighters and their white flags. And video clips of the ceremony circulating on social media showed crowds gathered around him carrying Taliban flags and chanting “long live the Islamic Emirate,” what the Taliban called their government when in power.

“It would be great if an Islamic government is put in place — it can end the bloodshed,” the retired general says in the video, speaking at a mosque and surrounded by Taliban flags. “This is a very happy occasion, and God willing, others will also be encouraged.”

There was no clear indication of what pushed the former general to join ranks with his former enemies. His phones were switched off.

Several officials in Farah described how the war has become deeply intertwined with local tribal rivalries, with each side drawing support and resources from the government or the Taliban to gain an upper hand.

Samiullah Samim, a member of Parliament from Farah, said that the Taliban had cranked up the pressure on General Bakhtawar’s relatives and that the government had not come to his rescue. For years, the general was involved in local businesses and even ran militias in support of the government, often staffed with men from his tribe and relatives who faced attacks and suicide bombings.

Then, in 2018, he ran for Parliament from Farah and was a winner in the preliminary results, only to be declared the loser in the final result of what was seen as a deeply fraudulent vote.

Despite what the general saw as betrayals by the government, his two sons were quickly rising within it.

His oldest son, Farid Bakhtawar, became the head of the Farah provincial council, making him one of the most influential officials in the region.

But he was killed along with 20 other people in October 2018 when their helicopter crashed in Taliban territory. For several days, the Taliban refused to hand over his body. At first, the insurgents demanded in return the body of their assassin who had killed Gen. Abdul Raziq, one of the most powerful men in southern Afghanistan, and barely missed the top American commander. Then the Taliban settled for a cash payment, said Dadullah Qani, a member of the provincial council.

Mr. Qani said that even after General Bakhtawar retired, he formed a pro-government militia to keep fighting and killing Taliban. Before accepting him in their ranks, the Taliban charged General Bakhtawar about $10,000 in “death compensations” for three of their fighters killed by his militia, Mr. Qani said.

“He forgot about all the sacrifices and the blood shed for the sake of the country by his family and his men and he surrendered to a terrorist group,” Mr. Qani said.

Mr. Samim, the lawmaker, said the former general carries a lot of sway with the militia forces that are propping up the government in parts of Farah, and his switching sides could tip the balance even further toward the Taliban.

“Even if the pro-government militias don’t join the Taliban, they would be demotivated and will see this as a bad failure of government,” he said.

She Accused a Coach of Abuse. Then More Than 30 Gymnasts...

For two years, Sara Allan, a former gymnast who grew up in New York City, had wanted to file a complaint. In 2018, she...

Are almonds really as sustainable as we think, or just a...