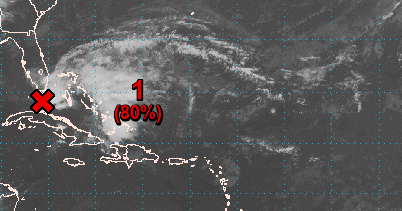 The first named storm of the Atlantic hurricane season formed off the coast of Florida on Saturday, making it the sixth consecutive year that a system formed before the official June 1 start of the season, the National Hurricane Center said.

Arthur was expected to remain well away from the east coast of Florida, Georgia and South Carolina on Sunday, and then move near or just east of the coast of North Carolina on Monday, the center said on Sunday morning .

A tropical storm warning was issued for the North Carolina’s Outer Banks, the center said. The storm was expected to bring one to three inches of rain on Sunday night and Monday.

The center predicted the system would move northeastward over the western Atlantic.

The storm was not predicted to become a hurricane, or to make landfall, officials said.

“The official start of the hurricane season, as you know, is June 1 and runs through Nov. 30,” Dennis Feltgen, a spokesman for the National Hurricane Center, said on Friday. “Ninety-seven percent of the storms that form, form during that six-month period.”

The other 3 percent are in the other six months, he said, noting that the center has seen storms form in every month outside of the hurricane season.

Mr. Feltgen said that “it’s not unusual” for storms to form before the official start of the season. “We’ve seen this before,” he said. “Although six years in a row, that’s a little unusual.”

With that information, the hurricane center “is weighing the potential advantages and disadvantages of changing the official start date of the Atlantic hurricane season, based on the possibility that the recent uptick in late May storms will continue,” he said.

Weather observers should not play down tropical storms in May, Mr. Feltgen said.

“Tropical storms produce storm surge, they produce very heavy rainfall, which we’re looking at right now,” he said. “Don’t take a tropical storm lightly, no matter what time of year it is.”

The National Oceanic and Atmospheric Administration is set to issue its annual hurricane forecast on Thursday.

(Want to get this briefing by email? Here’s the sign-up.) Good morning. We’re covering the surging coronavirus caseload in Europe and the United States, Joe Biden’s...

A Trump Policy ‘Clarification’ All but Ends Punishment for Bird Deaths

Terry O’Neill, Photographer of the Famous, Is Dead at 81