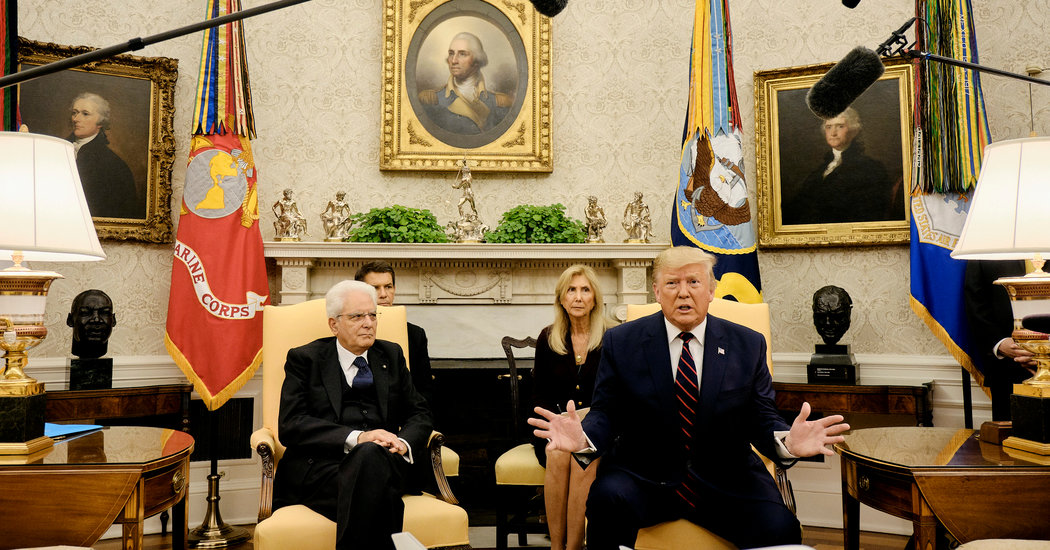 WASHINGTON — President Trump on Wednesday distanced the United States from the conflict between Turkey and America’s Kurdish allies in Syria, saying that the battle “has nothing to do with us” as he defended his decision to withdraw American troops from northern Syria.

Mr. Trump, speaking to reporters in the Oval Office alongside the visiting president of Italy, said the American soldiers he had ordered to pull back were no longer in harm’s way and that “they shouldn’t be as two countries fight over land.”

“That has nothing to do with us,” Mr. Trump said, all but washing his hands of the Kurdish fighters who have fought alongside American troops against the Islamic State for years but have now been left to fend for themselves. “The Kurds know how to fight, and, as I said, they’re not angels, they’re not angels,” he said.

The president’s comments in the Oval Office and again during a later news conference in the East Room came as Vice President Mike Pence, Secretary of State Mike Pompeo and Robert C. O’Brien, the president’s new national security adviser, were preparing to fly to Turkey in a bid to persuade President Recep Tayyip Erdogan to pull back his offensive.

Republicans and Democrats alike have denounced the president for abandoning the Kurds, who now are fighting Turkish forces in a chaotic battlefield that also has put at risk American troops pulling back from the Syrian border with Turkey. Mr. Trump’s decision to withdraw the small American force from the border, where they had served as a kind of trip wire deterring Turkish aggression, has been widely criticized as a signal permitting Turkey to launch its offensive.

Mr. Trump insisted his handling of the matter had been “strategically brilliant” and minimized concerns for the Kurds, implying that they allied with the United States only out of their own self-interest. “We paid a lot of money for them to fight with us,” he said. Echoing Mr. Erdogan’s talking points, Mr. Trump compared one faction of the Kurds to the Islamic State and he asserted that Kurds intentionally freed some Islamic State prisoners to create a backlash for him. “Probably the Kurds let go to make a little bit stronger political impact,” he said.

He dismissed concerns that his decision had opened the way for Russia, Iran, the Syrian government and the Islamic State to move into the abandoned territory and reassert their influence in the area. “I wish them all a lot of luck,” Mr. Trump said of the Russians and Syrians. Warning of a repeat of the disastrous decade-long Soviet war in Afghanistan, he added, “If Russia wants to get involved in Syria, that’s really up to them.”

Critics in both parties condemned the president’s approach. Senator Lindsey Graham, Republican of South Carolina, who has been one of Mr. Trump’s closest allies but a sharp opponent of his Syria decision, suggested that the president was wrong to think the current conflict did not matter to the United States.

“I hope President Trump is right in his belief that Turkeys invasion of Syria is of no concern to us, abandoning the Kurds won’t come back to haunt us, ISIS won’t reemerge, and Iran will not fill the vacuum created by this decision,” Mr. Graham wrote on Twitter.

“However,” he added, “I firmly believe that if President Trump continues to make such statements this will be a disaster worse than President Obama’s decision to leave Iraq.”

Senator Mitt Romney, Republican of Utah, said that by sending Mr. Pence and Mr. Pompeo to Turkey, Mr. Trump was trying to fix a problem of his own creation, but too late.

“It’s very hard to understand why it is the vice president and secretary of state and others are going to talk with Erdogan and Turkey,” Mr. Romney told reporters. “It’s like the farmer who lost all his horses and goes to now shut the barn door.”

Even Mr. Trump’s guest on Wednesday diverged with the president during their second joint appearance before reporters in the East Room. Where Mr. Trump said Turkey’s invasion had nothing to do with the United States, President Sergio Mattarella of Italy said, “Italy, aligned with the E.U.’s position, condemns the Turkish operations.”

Mr. Trump pushed back on Mr. Graham during that second meeting with reporters, saying that the South Carolina senator should be focusing on investigating the president’s Democratic opponents, including former President Barack Obama. “The people of South Carolina don’t want us to get into a war with Turkey, a NATO member, or with Syria,” Mr. Trump said. “Let them fight their own wars.”

Even as the president washed his hands of the conflict, his vice president and secretary of state prepared to head to the region to try to stop them from fighting their own wars. Mr. Pompeo said the main goal of meeting with Mr. Erdogan was to secure a cease-fire between Turkish and Kurdish forces.

Amid reports that Turkish forces were moving near the Syrian town of Kobani, which has a large Kurdish population, Mr. Pompeo said he was given a commitment by the Turkish foreign minister, Mevlut Cavusoglu, that troops would not enter the town.

“We need them to stand down, we need a cease-fire, at which point we can begin to put this all back together again,” Mr. Pompeo said on Fox Business Network.

However, he also said the Trump administration did not want to isolate Turkey, a fellow member of NATO — a fine line the United States must walk as it issues economic penalties against Mr. Erdogan’s government.

“Our goal isn’t to break the relationship,” Mr. Pompeo said. “It is to deny Turkey the capacity to continue to engage in this behavior. The president said this was a bad deal, it was a bad thing; we’re working to stop it.”

Mr. Pence, who has been spending most of his time on domestic travel promoting policies like the revised trade agreement with Mexico and Canada in states being targeted by Mr. Trump’s re-election campaign, had scratched all foreign trips from his schedule through the end of the year. The trip to Turkey was unplanned, added at the last minute.

Mr. Pence also has a tense relationship with Mr. Erdogan. He was one of the administration’s leading advocates for the freedom of Andrew Brunson, an American pastor who had been detained in Turkey for two years but was freed last fall.

“The president is seeking a cease-fire because he feels that from a humanitarian perspective, this is not good,” said Marc Short, the vice president’s chief of staff.

Mr. Short said that Mr. Pence had no personal relationship with Mr. Erdogan to lean on, although they had met when Mr. Erdogan visited Washington. Mr. Pence’s trip to Ankara to meet with Mr. Erdogan, he said, was “one in which the imprimatur of the vice president is important.”

Former officials described the trip as all risk for Mr. Pence and Mr. Pompeo and all reward for Mr. Trump. The vice president and secretary of state are now in an awkward position of being sent to stop an invasion after Mr. Trump described it as “not our problem,” while the president looks like he sent a delegation to conduct talks but will ultimately do whatever he wants.

Robert Ford, who was the last American ambassador to serve in Syria before the civil war forced the closing of the United States Embassy in 2012, said it would be counterproductive to punish Turkey to the point of driving it “further into the arms of Russia.”

He also said the United States should not be beholden to long-term interests of Kurdish fighters to carve out a state in eastern Syria, and that the Trump administration “is right to stop the mission creep in U.S. strategy in Syria.”

But given Mr. Erdogan’s widely known interests in invading the Kurdish territory, Mr. Ford said the Trump administration mishandled the delicate diplomacy. He noted that the very day that Mr. Erdogan announced the invasion, Mr. Pompeo was in the region — and could have attempted to head off the military campaign hours earlier with a quick visit to Turkey to meet officials there instead of flying back to Washington.

“The Trump administration is correct to limit our commitment in eastern Syria, but it is very clumsy in managing the policy and the rollout,” said Mr. Ford, now a fellow at the Middle East Institute and Yale University. The mission by Mr. Pence and Mr. Pompeo comes a full week after the invasion began. “At this late stage,” Mr. Ford said, “it is not clear what the administration can hope to salvage.”

The Superdelegates Are Nervous

Hi. Welcome to On Politics, your guide to the day in national politics. I’m Lisa Lerer, your host, writing to you aboard a flight...

Women in Mexico Are Urged to Disappear for a Day in...

Coronavirus, State of the Union, Iowa: Your Wednesday Briefing

After Election Victory, Boris Johnson Says ‘We Are Going to Unite’