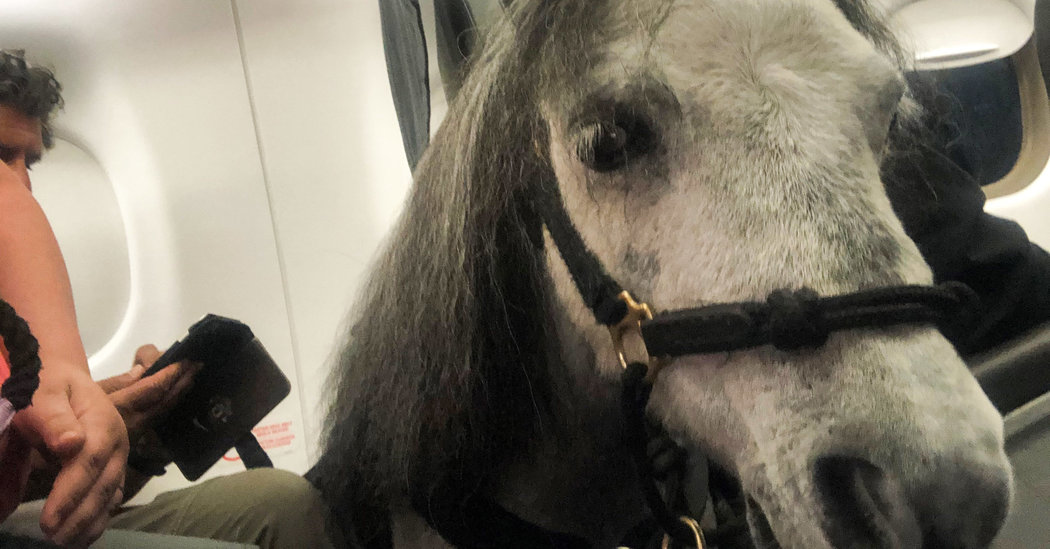 The Department of Transportation is proposing an overhaul to the regulations around service animals on flights in the United States, banning all animals except dogs, and no longer forcing airlines to let animals accompany passengers who say they need them just for emotional support, officials said on Wednesday.

The proposed new rules will be open to the public for comments for 60 days, and then the department will analyze the results before it makes a final decision, it said in a media briefing.

In a statement, the department said it “recognizes the integral role” that service animals provide for people with disabilities, but added that the changes could help reduce the likelihood that passengers would be able to “falsely claim their pets are service animals.”

Under the proposal, passengers with physical or psychological disabilities who want to bring a dog into the cabin as a service animal must fill out a federal form attesting that it has been trained to perform tasks that address the disability, the officials said.

An animal cannot just be brought aboard to make a passenger “feel better,” an official said.

If approved, the new rules would narrow the department’s formal guidance from 2019 that made clear that three types of service animals should be prioritized for travel: cats, dogs and miniature horses (read more about why miniature horses made the cut here). At the time, questions were raised about how the animals could relieve themselves, and their ability to fit in confined spaces.

In further limiting the options to dogs, the department said its proposed definition aligned with one used by the Department of Justice and the Americans With Disabilities Act.

Passengers who want to travel with animals can still do so under a carrier’s existing rules for bringing pets onboard. Under the proposal, it would be up to an airline to decide whether to allow an animal to fly for a passenger’s emotional support, the department said.

People have tried to take a wide variety of animals on airplanes, including birds, rabbits, monkeys, cats and miniature horses, saying the animals help them with their anxiety or execute needed jobs if they have physical or mental challenges.

The proposals would also require passengers to check in early, and have their animal be leashed, well behaved and fit in the owner’s foot space. The rules would also limit the number of service animals for each passenger to two.

Fines and a possible jail term would be the consequence of knowingly lying on the federal form needed to attest to the animal’s training.

Some organizations that work in passenger and disability advocacy said the proposed rules were misguided.

Douglas Kidd, the executive director at the National Association of Airline Passengers, a nonprofit organization that does advocacy work, said in a telephone interview that airplanes were already cramped. He added that airlines should accommodate animals in cabins by creating more space for passengers, and improve air filtration to reduce the possible effect of allergens.

“Saying they are just going to restrict it is not going to do it,” Mr. Kidd said of the department’s proposals. “As airplanes get more and more full, there is hardly room for the people onboard the plane, much less an animal, especially when they have reduced the legroom.”

Curt Decker, the executive director of the National Disability Rights Network, said the proposals could make it harder for people with disabilities to travel because they restrict the size of the animals.

“This is entirely due to airlines reducing space between rows and squeezing passengers into smaller and smaller seats, so small that there is now no longer room for a service animal on some planes,” he said in a statement. “Cramped space on planes is a nuisance to all travelers, but it now prevents some people from traveling at all.”

But the Association of Flight Attendants, the trade union that represents nearly 50,000 flight attendants at 20 airlines, welcomed the proposals, saying that passengers claiming pets as emotional support animals have “threatened the safety and health of passengers and crews in recent years while this practice skyrocketed.”

Flight attendants have been hurt and safety has been compromised by untrained animals loose in cabins, it said.

“Untrained pets should never roam free in the aircraft cabin,” the association said. “The days of Noah’s Ark in the air are hopefully coming to an end.”

Kenneth Mendez, the president of the Asthma and Allergy Foundation of America, said the proposed rules might help curb some of the abuses by people taking animals on airplanes and saying they were there for emotional support.

“But you also have to take into account those passengers with asthma and allergies, and there is a growing number of animals on airplanes,” he said in a telephone interview.

Mona Ramouni, 39, who is blind, has relied heavily on her miniature horse Cali, who stands 29 inches to the top of the shoulders, for 11 years to help her with tasks such as crossing the street and finding buttons for elevators.

Ms. Ramouni, who lives outside Lansing, Mich., said there were solutions for some of the questions posed by the airlines. Before a 2013 flight, for instance, Ms. Ramouni said she tied a plastic bag sprinkled with baking soda on Cali like a diaper, for when the horse needed to relieve herself. On the flight, she said, Cali stood easily in the legroom area in front of Ms. Ramouni’s bulkhead seat.

“When you have a ruling saying horses are no longer allowed, it makes it more difficult,” Ms. Ramouni said. “I won’t be able to say the sky is the limit.”

For Three Suffragists, a Monument Well Past Due

The U.S. Lifted Its Advisory Against Traveling Abroad. What Does That Mean?

Katie Button gives workers at her Asheville, N.C., restaurants an annual cash incentive of $300 if they get medical checkups and have their teeth...

Checking In With an Old Buddy (Cianci That Is)