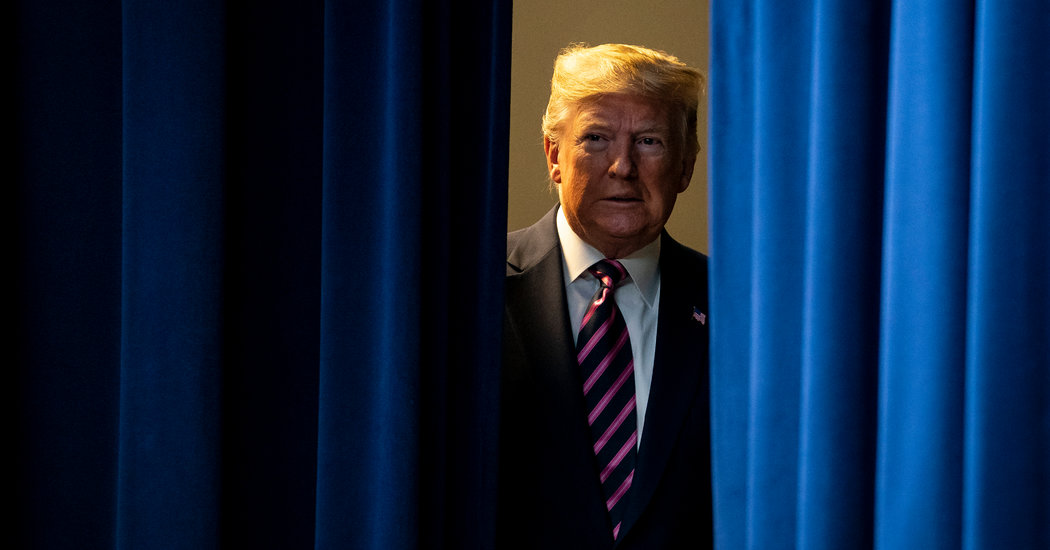 WASHINGTON — President Trump is discussing with his advisers the possibility of sitting out the general election debates in 2020 because of his misgivings about the commission that oversees them, according to two people familiar with the discussions.

Mr. Trump has told advisers that he does not trust the Commission on Presidential Debates, the nonprofit entity that sponsors the debates, the two people said.

Less of a concern for Mr. Trump than who will emerge as the Democratic nominee is which media personality will be chosen as the debate moderator, according to people in contact with him.

At a state-of-the-race campaign briefing in Arlington, Va., the president’s advisers declined to comment on what their plan was for the debates. One senior adviser to the president seemed to wince at the question, and said it was not something advisers were prepared to discuss until next year.

In the 2016 general election debates, Mr. Trump repeatedly complained about being at a disadvantage to Hillary Clinton, the Democratic nominee. And the post-debate polls showed Mr. Trump had good reason to be concerned: Mr. Trump and Ms. Clinton were essentially tied in the polls going into the first debate, but she received a bump after each of the three face-to-face matchups.

A Gallup poll conducted after the third debate, for instance, found that 60 percent of viewers thought Ms. Clinton did a better job, while 31 percent chose Mr. Trump.

After his performance in one of the debates was panned, Mr. Trump blamed a “defective mic” and questioned whether it was done “on purpose” to put him at a disadvantage. It turned out that a technical malfunction had indeed affected the volume of his voice during that debate, in September 2016.

That acknowledgment by the commission, however, never mollified Mr. Trump.

His 2016 debate team — led primarily at that time by Rudolph W. Giuliani, the former New York City mayor — also clashed with the commission over where to seat a group of women who had accused former President Bill Clinton of sexual assault or sexual harassment.

The Trump campaign invited the women as surprise guests to the second debate in St. Louis. Mr. Trump wanted them seated in his V.I.P. box, where Mr. Clinton would have to walk past them; they would also have been in her line of site from the stage. In the end, the campaign had to stand down after the commission threatened to call security and have the women removed.

Former Clinton aides said they expected Mr. Trump to participate in at least one 2020 debate, despite the president’s hints that he would refuse. “Not doing any would not be strategically smart,” said Philippe Reines, a longtime Clinton adviser, who predicted that “he’ll bluff that he won’t do any with the goal of only having to do one.”

Diana Russell, Who Studied Violence Against Women, Dies at 81

Hurricane Forecast: ‘One of the Most Active Seasons on Record’

Colbert Uncovers ‘The Most Incriminating Word Of All’ In Notes From...

Dementia Can Make Patients Wander. What if They Cross the Border?